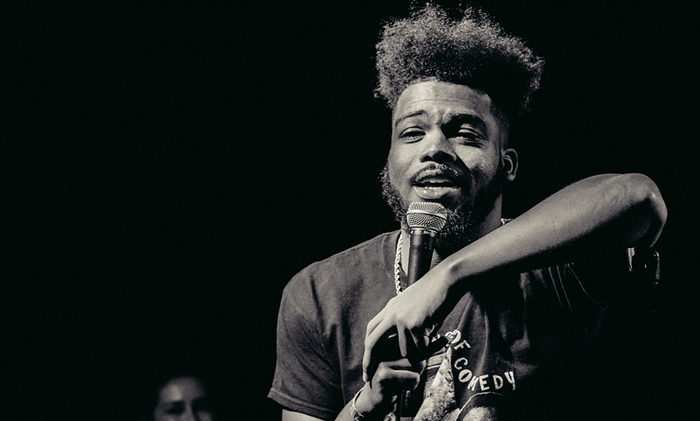 Comedian Niles Abston has been steadily making a name for himself as one to watch.

His debut special, GIRLS DON’T TWERK TO JOKES, was filmed on February 15, 2020 in front of 100-plus people at a house in Van Nuys, CA. Overflowing with a sharp wit, it was not just his first special, but also the first hour of comedy he’d ever performed. Just days later, he came to Portland as part of the 2020 NW Black Comedy Festival and was one of the Mercury’s picks to see. Two weeks later, the nation went into quarantine.

From that time of isolation, the comedian has emerged with his sights set on big things. Abston is now a headlining act who’s taking new material and his new podcast on the road. Based out of Hollywood, he’ll be making a stop again in Portland this Thursday, and is also performing in Seattle for the first time before heading to Brooklyn for his own comedy festival that he is calling Basementfest.

The Mercury recently spoke with Abston over the phone about coming out of quarantine to tour, his now-viral joke targeting Dave Chappelle, and what’s coming next for him.

We lightly edited this interview for length and clarity.

MERCURY: What has it been like seeing the response to your debut special?

Abston: It’s been really dope. A lot of people like it. I was 24 when I shot it, I’m 26 now, because it was literally the day before my 25th birthday back in February of 2020. So it was really before the pandemic.

I don’t even think about it anymore, and I honestly forget about some of the shit I even said on there so it’s really funny when people discover it now and they’re like “Yo, this was hilarious!” I’m like “that was a whole other person ago.”

But it’s really cool, the response I’ve gotten from it. Whenever something goes viral on the internet, people flock to it and find it. As of this week, I’ve gotten a lot of traction from it, so it’s been fun.

Is it your style to have it be that you finish a special and move on to all new material?

Yeah, that’s what I’ve been doing. Just working on all new stuff, putting this new set together. It’s then just really funny for people to discover the old special and then come see me live then say “Oh, you didn’t say anything you said on there.” Like yeah, that’s because that was forever ago.

I wanted to ask you about going viral while also only asking one Dave Chappelle-related question as you’re your own comedian. The clip you posted on Twitter about making jokes about trans people without offending anyone—how did you come to write that?

I wrote that joke like two, three weeks ago. I was just really high and laughing about the whole situation. I even told someone “I really don’t think it’s that hard, I bet I can think of one.” I was literally just on shrooms, I dropped it in my group chat and everybody laughed so I was like “alright, I’m gonna say it on stage.”

Then I was opening for Roy Wood Jr. at Fort Collins at the Comedy Fort. It’s a really nice new club in northern Colorado and they get really good video of all the comedians so they sent me the set tape. I was wondering if I should share this, so I posted it on Instagram to my close friend’s stories.

So I posted it and it just went crazy online, so Jay was right.

Now with an even more serious journalistic question, has the woman at the nail spa seen that joke?

Oh no, I don’t know [laughs]. Maybe, that’d be crazy. If some nail salons could reach out to me, maybe I could get some deals.

One of the things I read is that you first got into stand-up because you really wanted to make movies. Is that something you still want to do in your future?

Yeah, that’s all I wanted to do. Stand-up was bullshit [laughs]. I only did this because as a Black dude in the film industry it’s very hard to navigate certain places. Whether that’s like being an assistant or an intern, who knows how long that could take. Even just getting that job, a lot of people can only do those jobs because they don’t have to pay rent, or their family has money and all this kind of shit.

I was just like “I can’t be an intern for eight years,” so I just started doing stand-up to meet people and write. It just kind of formed into me actually liking it. But yeah, filmmaking is the reason I moved to LA., and I’m still doing it. I just directed my first short film this past year after somebody gave me the money to do it because they liked my special. We just submitted the short film to a couple festivals so hopefully we get in.

It’s called Notice To Quit, and it’s about two stoners that get an eviction notice. In California they’re called “Notice To Quits.” Basically they come up with a plan to blackmail their landlord so they don’t have to pay rent anymore.

When it comes to you traveling around, is it weird still being in the midst of the pandemic, or has it been refreshing to get back out there?

It’s funny, I got popular during the pandemic so I don’t know what touring outside of a pandemic is like [laughs]. So this is normal to me. But it’s been really fun. A lot of people reached out to me online, so it’s funny getting to actually meet them at these shows and take pictures with these people.

Is it surreal to come back through the Pacific Northwest in a totally different landscape both for yourself as a comedian and for the world?

So it’s funny, I went to Portland two weeks before COVID hit. I shot my special on my birthday and then the next week I was in the NW Black Comedy Festival in Portland in February of 2020. I had a great time, I was there for about four or five days. Strip clubs were dope, the food was good, everybody was really nice, the weed was dope. So I haven’t been since like right before the pandemic.

It’s funny—when I was there, I didn’t have any followers or anything like that. I had just shot this special that I didn’t know what I was going to do with yet. I didn’t even have a name for it yet and then now, two years later, to come back to Portland as a headliner on tour is pretty crazy. In fact, I’ve never even thought about that until now. It’s wild [laughs]. Yeah, I’m excited to come back to Portland but I’ve never been to Seattle so that’s something I also really excited about. I’m blessed.

Something I’ve seen you say is that you would want to be in a scene arguing with Larry David on Curb Your Enthusiasm. What would you argue about with Larry if you could?

In your last special you had a joke about Parasite. Is there anything you’ve watched recently that was good that you are working into your act?

I’m working on some jokes about this one movie I liked recently, in fact I literally just watched it this morning before this interview, which is called Shiva Baby. It’s like my favorite movie right now, so I’ve worked on a couple jokes about that. I’m also working on a joke about the old Mighty Morphin Power Rangers, so we’ll see if it works.

Do those jokes, Shiva Baby and Mighty Morphin Power Rangers, work together?

No, they’re a little bit spaced out [laughs].

You can see Niles Abston live at the Hawthorne Theater in Portland this Thursday, November 4, and in Seattle Saturday, November 6.