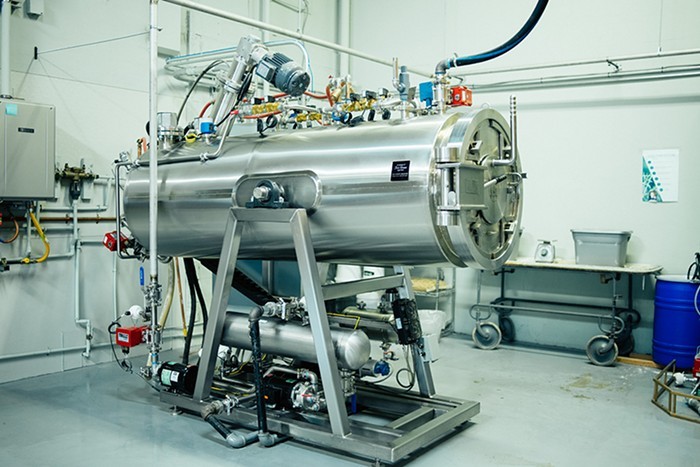 [Happy Halloween! All week long the Mercury has been publishing classic tales of local Halloween horror from our archives, as well as brand spankin’ new (and creeeeepy) pieces… in this one from 2019, writer Ciara Dolan inspects Portland’s first water cremation machine.—eds]

In Oregon, there are five legal ways to lay the dead to rest. Bodies can be embalmed and shipped out of state; donated to scientific research facilities; cremated; buried; or dissolved. Yes, you read that correctly: When you die, the flesh can literally be dissolved from your bones.

The scientific name of the process is alkaline hydrolysis, though it’s more commonly known as aquamation or aqua cremation. If you want to avoid the mildly gory details later in this piece, here’s the short version: Like flame cremation, aqua cremation reduces the body to bones—it just uses water instead of fire. It’s legal in more than a dozen states, but Oregon was one of the first to legalize it in 2009, and it’s one of the only states with the proper facilities to actually perform the procedure.

Deon Strommer, the owner and president of Northeast Portland’s First Call Mortuary Services, has worked in the death care industry for more than four decades. One year ago, he purchased what he says is the first commercially available, high-pressure alkaline hydrolysis machine west of the Mississippi. (Strommer is sure to specify that it’s the only high-pressure machine, since there’s a low-pressure model in Roseburg.) Since debuting it last year, Strommer says he’s conducted around 200 aqua cremations.

Portland has always been ahead of the curve when it comes to death care. In 1901, Wilhelm’s Portland Memorial installed one of the first flame crematories west of the Mississippi. (Modern flame cremation came about in the 19th century to prevent the spread of communicable diseases, but didn’t gain traction in the industry until the 1980s.) Back then, explains Wilhelm’s family services advisor Josh Runyon, flame cremation was just a “kooky idea.” Though some people might feel that way about aqua cremation, Runyon believes it’s the future for death care.