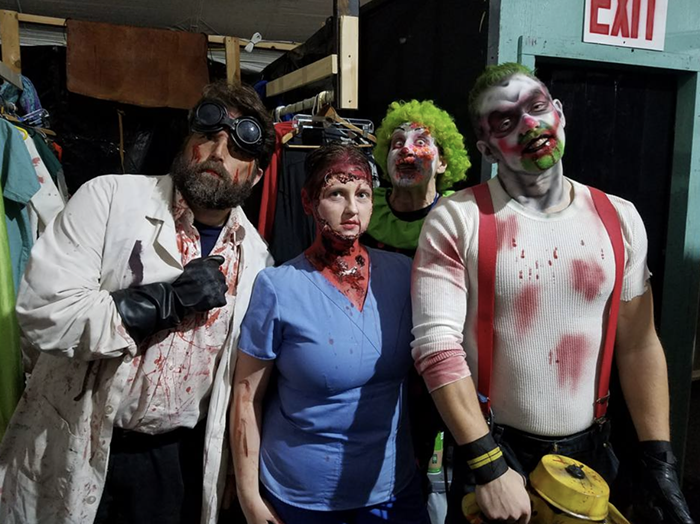 Tracy Kittle (center) during her first year as a haunter at Fearlandia. courtesy of Tracy Kittle

Unlike some fellow actors, Lawrence doesn’t only rely on jump scares, gruesome makeup, or heightened special effects to bring the creep factor. Instead, he’s what haunted house pros call a “talker”—someone who sets the tone as people file into the set. His job is to make sure visitors get an unsettling welcome and to “just be generally off-putting.”

That might mean demanding a stick of gum or a mint from patrons, or asking someone their name and then exclaiming, “You told a stranger in the dark your name? Your real name?”

“I glean a little information, then use it to make people uncomfortable,” Lawrence says in a recent interview with the Mercury. “Before the pandemic, I would break their personal space and stand inches from them, which weirds people out. What I do now is make eye contact—I mean real eye contact… It’s definitely a challenge when a lot of your face is covered [by a COVID-19 mask]. It’s a lot of eye acting, and voice work.”

Lawrence acts each year at Fearlandia, which this year is doing a joint haunt with Underhill Haunted House at Veterans Memorial Coliseum. Bound by pandemic protocol, haunt actors must check vaccine cards, social distance from customers, and wear face masks. But it’s an improvement from last year, when the only haunted houses operating in Portland were drive-throughs—hardly an opportunity for actors to shine.

For Fearlandia actors like Lawrence or Tracy Kittle, the return to form for haunted houses is a welcome chance to have fun and scare people again. But it’s also deeper than that. 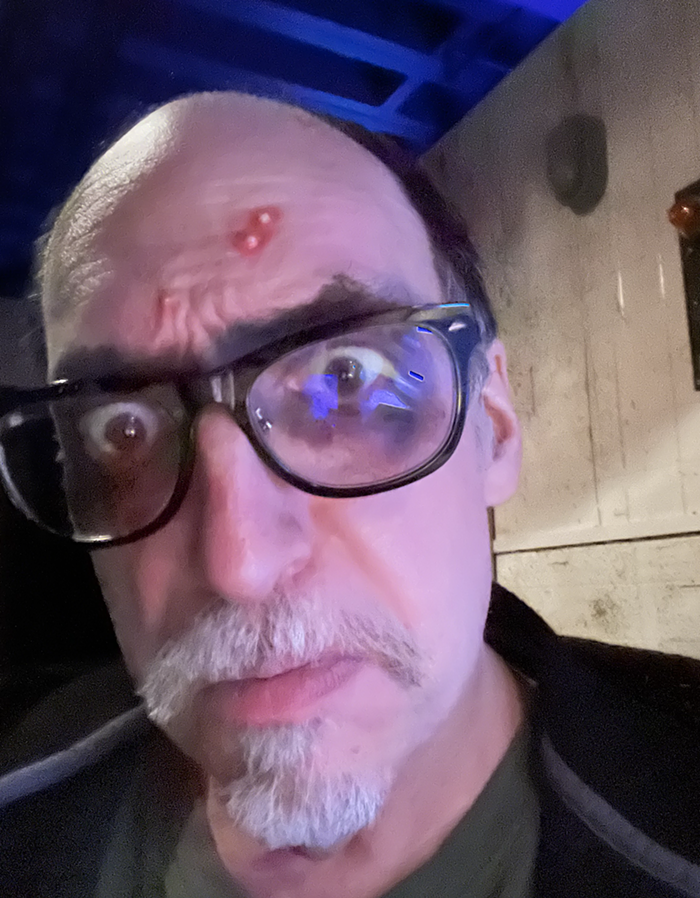 “Something that draws me back each year is how familial it is,” says Kittle, who started as an actor and is now cast manager at Fearlandia. “It’s a crazy family reunion one month every year.”

When casting the haunted house, Kittle isn’t necessarily looking for performers with horror acting expertise, though many people drawn to haunted house work do have experience with acting or improv. Instead, the only hard-and-fast requirement is enthusiasm.

“We have an attitude of embracing skills and background of all sorts,” Kittle adds. “If you’re brand new, you’re working next to people who have been doing it a long time. A lot of people who do haunt work year after year have an extra passion about it, and they want to bring people in. It’s interesting to see how much the returning people coach and encourage new actors.”

Most newbies start with the simplest job: operating a push-panel that makes for an easy surprise scare. But eventually, actors will find the role that suits them best. They might be a jump-scarer, a roamer—or, like Lawrence, a talker.

“What I’m doing now is my favorite, just because of the human interaction with it,” he says. “It’s fun improvising, interacting with people and messing with them. It’s a gas.”

Lawrence has been acting in Portland for 40 years, usually in supporting roles. He compares haunted house work to the best ensemble-cast plays he’s done, when “everybody is there for the show.”

“It’s a funny thing—a lot of people love to be terrorized. We’re in a world that’s already pretty terrifying, but this is a fantasia. This has a structure. There’s an end to this terror.”

“The haunt is one of those places where it’s all about the show, the fun, the excitement, the scares,” he adds.

Those fun vibes include behind-the-scenes hijinks. Haunters keep tallies of how many people they surprise so much that they jump, or scare so badly they wet their pants.

“There was one 13-year-old boy who said ‘I just pooped in my pants,’” Lawrence remembers.

Other haunters enjoy bringing their characters outside of the haunted house, and into the real world.

“If I have full makeup on, I love going through a drive-through,” Kittle says. “There’s something about making a drive-through worker’s night. For some people, it’s important to get out of the monster before they go home. Others will totally take public transit home with their full face makeup on.”

But while the team takes pride in scaring people, they also try to walk the line of not causing anyone real trauma. In an environment where people have willingly paid to be terrified, haunt actors have to “be good at reading people,” Kittle says.

“No haunter that I work with wants to be the reason somebody never goes back to a haunted house,” she continues. “So far, everyone I’ve worked with has been great at knowing when to break character and get them out.” 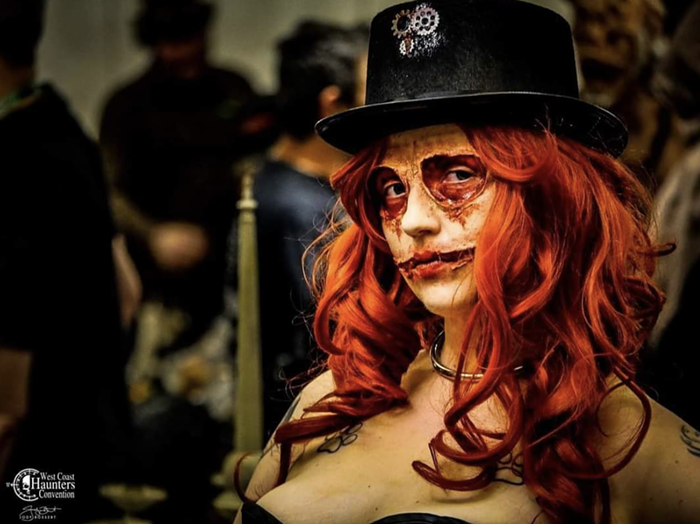 For many haunters, that compassion for too-scared customers comes from a personal place.

“There’s a surprising number of us [haunted house actors] who deal with feeling anxious or depressed,” Kittle says. “It’s interesting to get to be the thing behind the curtain scaring people. You’re the one in control in that situation. You know the halls aren’t scary, you know the people in every next room, and you’re the one who has the edge on a person. It’s empowering.”

That dynamic might explain why Lawrence loves working at haunted houses, but hates going to them as a customer. “They scare the crap out of me,” he confides. But he can understand the appeal for visitors.

“It’s a funny thing—a lot of people love to be terrorized,” he says. “We’re in a world that’s already pretty terrifying, but this is a fantasia. This has a structure. There’s an end to this terror.”

But there’s at least one real-world horror seeping into the fantasy realm of haunted houses this year. The pandemic has presented some challenges for haunters (no crazy fake teeth), but also some opportunities (masks make great blank canvases for air-brushed effects).

“It does take away from things a little,” Lawrence says about the COVID protocol. “But judging from the shrieking and screaming I’ve heard, not too much.”