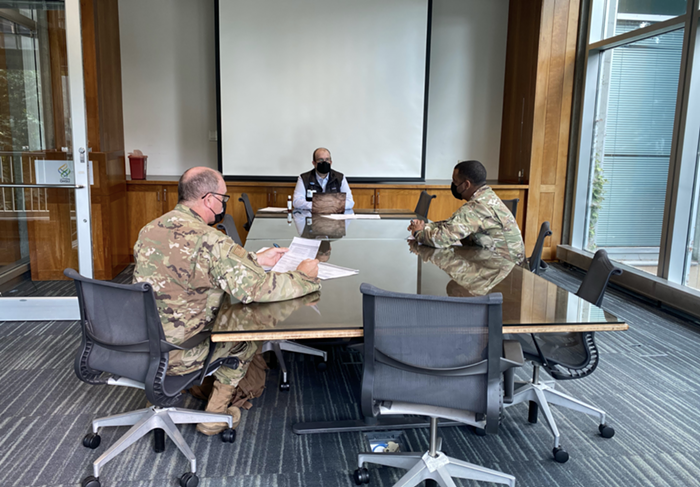 Members of the Oregon National Guard in a meeting with an OHSU official. OHSU

A member of the Oregon National Guard assigned to support COVID-19 relief work at Oregon Health and Science University (OHSU) has been placed on leave after being accused of sexual harassment.

In late September, two OHSU staff told management that a male member of the National Guard working at OHSU had sexually harassed them. That unnamed Guard member was promptly pulled from his deployment at the hospital, according to Major Chris Clyne, a spokesperson for the Oregon National Guard

“The guard will be off duty pending an investigation into his conduct,” Clyne said. “We are dedicated to transparency and take this very seriously.”

This incident was first reported by the Oregon Capital Chronicle on Friday.

Around 1,500 members of the Oregon National Guard were deployed to 50 state hospitals in August, where they were tasked with offering “non-clinical” support to hospital staff burdened by a swell in COVID patients. About 40 of those guards are currently assigned to OHSU. Clyne said those guards do everything from cleaning rooms to preparing food and screening visitors’ temperatures at the hospital’s front desks. Clyne did not say what type of tasks the guard under investigation was responsible for.

OHSU administration briefly informed staff of the incident in a Monday evening email, but offered little information on what took place.

“OHSU does not tolerate harassment of any kind and deeply regrets the trauma this incident has caused,” the email reads.

Pressed for more information by the Mercury, an OHSU spokesperson shared the same statement. It’s not clear if OHSU is conducting its own investigation into the incident. OHSU is already the focus of an investigation by a private law firm (which includes former US Attorney general Eric Holder) into separate claims of sexual assault against OHSU employees. The investigation, which began in April, was prompted by a number of lawsuits filed against the hospital for assault.

In the statement to the Mercury, OHSU spokesperson Tamara Hargens-Bradley included the hospital’s gratitude for the National Guard’s work.

“The National Guard has been an incredible partner to us throughout the pandemic, and we are extremely grateful for their service,” writes Hargens-Bradley.

Governor Kate Brown was responsible for deploying the National Guard to state hospitals. Brown’s office did not return the Mercury’s request for comment Wednesday.