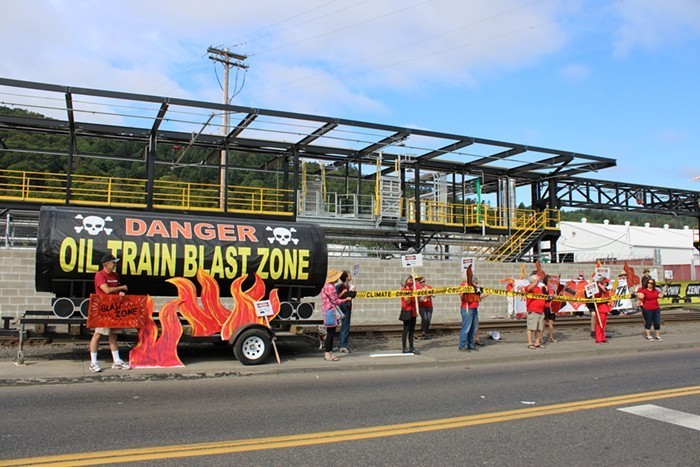 On Wednesday, Zenith Energy contested the Oregon Department of Environmental Quality’s (DEQ) denial of an air permit the oil transport company needs to continue operating its Portland facility. As a result, the company may be able to continue its operations for years while fighting legal battles against the city and state.

Zenith’s facility transports oil that arrives by train and then is shipped out from a dock in Northwest Portland’s industrial zone on the Willamette River. The facility has been under scrutiny from city officials and environmental activists for years, but the opportunity to halt the company’s operations didn’t arise until the DEQ started processing Zenith’s air permit renewal earlier this year.

While reviewing Zenith’s required renewal application for the facility’s air permit, the DEQ allowed Portland officials to evaluate whether the facility lined up with the city’s land use policies and values. In late August, city officials determined that Zenith’s operations were not in line with the city’s climate and public health goals and denied the company’s Land Use Compatibility Statement (LUCS). The city’s refusal of the LUCS triggered the DEQ’s denial of the facility’s air permit five days later.

Zenith immediately appealed the city’s LUCS decision in August, sending the case to the Land Use Board of Appeals (LUBA). If LUBA rules in Zenith’s favor, the company could then restart the application process for an air permit, which includes an opportunity for public comment. The first hearing for the LUBA case is scheduled for November 16.

Zenith contested the DEQ’s air permit decision Wednesday morning, just five days before the department’s denial of the air permit would take affect and Zenith would be forced to stop operations. According to DEQ spokesperson Lauren Wirtis, because the DEQ’s decision relies on the city’s denial of the LUCS, the Department of Justice—which oversees the DEQ’s legal battles—may want to wait until the LUBA case is decided before moving forward with Zenith’s challenge against the DEQ.

“That process can take longer than people think,” Wirtis said, noting that the courts have a backlog of cases due to pandemic delays.

Even if both cases are decided in the favor of the city and state, Zenith can continue to appeal the decisions to higher courts. In short, Zenith could extend their legal battles against the city and state for years while continuing to operate its oil transport facility.

Environmental advocacy organizations Willamette Riverkeeper and Columbia Riverkeeper are assisting the city of Portland in the LUBA case.

“Zenith refuses to accept any outcome where it does not get exactly what it wants,” said Willamette Riverkeeper Executive Director Travis Williams in a September press release announcing the organization’s legal support.

“The City made the right decision in denying the LUCS,” said Columbia Riverkeeper attorney Erin Saylor. “Our goal now is to ensure that decision stands.”

Members of the public can learn how to listen to the LUBA hearing here. The hearing is scheduled for November 16 at 1:45 pm.