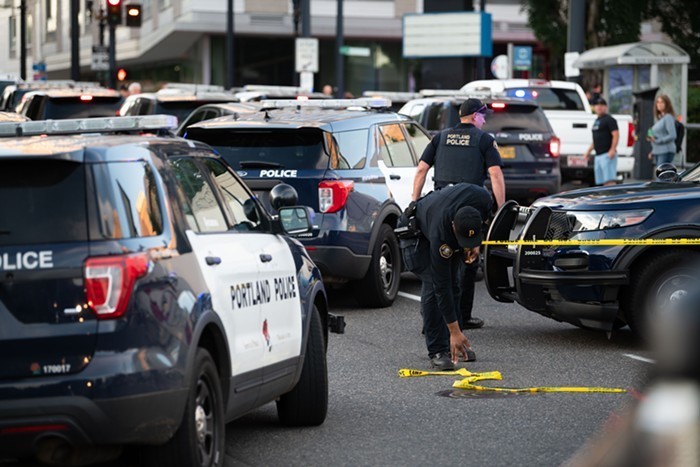 Portland police officers in Northeast Portland on June 24, 2021, shortly after a police officer fatally shot a member of the public. MATHIEU LEWIS-ROLLAND

It’s been nearly a year since Portlanders voted to approve a new oversight system for police who engage in misconduct. Yet, because the process of overhauling a police accountability program takes time, the city is still operating under the oversight system the ballot measure aims to undo—the Police Review Board (PRB).

That five-person board reviews the most serious allegations of police misconduct that come through the city’s Independent Police Review (IPR) office, the clearing house for all officer misconduct reports. Specifically, the PRB reviews cases that city investigators believe warrant an officer’s suspension or termination, cases that involve discrimination, cases where an officer used deadly force on a member of the public, cases in which a person dies while in police custody, and other weighty allegations.

After reviewing these cases during its closed-door sessions, the PRB votes to uphold the discipline proposed by the investigator who initially reviewed the case, or to dismiss (or lessen) the penalties. While it’s ultimately up to the chief of police to make the final decision on these cases, the chief often follows the PRB’s recommendation. The five-person PRB is composed of three police bureau employees, one representative from IPR, and one community member approved by Portland City Council.

The outcomes of these decisions are made public several times a year. To better understand Portland’s current oversight system, we’re diving into the details of some of those cases.

But first, an update on what its future holds: In July, City Council unanimously appointed 20 volunteers to a commission that will create the framework of a new police oversight system that they will submit to City Council by the end of 2022. While the commission is still in its infancy, there are a few guaranteed changes between how it will operate in contrast with the current process. As promised in the November 2020 ballot measure allowing the board’s creation, members of this future oversight board will be granted the authority to mandate officer discipline and compel officer testimony during an investigation—along with other privileges that are currently off limits for people outside of PPB.

Another wrinkle: In March, the US Department of Justice (DOJ) raised concerns with how the current oversight system operates, accusing the PRB of relying on erroneous information—given to them by PPB management—to determine whether or not an officer acted in violation of PPB policy. DOJ lawyers argued that the PRB determined a case based on an officer’s testimony instead of measuring the misconduct accusations against PPB’s policies, as they are instructed to do. DOJ lawyers are currently in closed-door meetings with city attorneys to determine how to settle this identified issue.

To understand how the new oversight board may differ from the current accountability system, it’s worth observing how decisions are made by the PRB. PRB’s reports on the group’s hearings and outcomes offer a hazy peek behind the curtain. However, these reports don’t include interviews investigators have with officers and witnesses about the alleged misconduct, only the final decisions—with limited details—made by the PRB. It’s not a comprehensive look at the current system, but it’s the best chance for the public to see how officers are held accountable—or not—by the city’s most consequential accountability team.

We’ve pulled several notable cases from the latest report on misconduct rulings decided by the PRB below. The report doesn’t include the names of any officers accused of misconduct.

This case looked into the allegation that a PPB officer intentionally poured a bottle of soda out on the seat of a person’s car while conducting a vehicle search. Another PPB officer and another unidentified witness saw this take place. The accused officer claimed it was an accident, but PRB members found the officer’s “narrative of the situation…to be inconsistent with other evidence.” The PRB found this officer in violation of both PPB’s professional conduct standards and rules regarding truthfulness, as it appeared this officer had lied to an internal investigator about the soda dump. Three out of the five board members recommended that this officer be fired over this infraction, arguing that the lying officer could “not be trusted to testify in court in future incidents.” The other two board members suggested the officer be placed on unpaid leave for two days. However, according to the report, neither of these outcomes stuck. Instead, the report notes, PPB’s then-Assistant Deputy Chief Davis decided not to discipline the officer at all. The report offers no explanation as to why Davis shirked punishment in this case.

In this case, PRB members reviewed an allegation made against an officer who, while chatting with new PPB employees, made a comment about a transgender community member that was “derogatory,” and “not normally used to refer to people.” At the same time, this officer allegedly bragged about his income to the other officers, and noted that new hires would likely be the first to be laid off if PPB faced budget cuts. The new employees reported this officer’s behavior to management. The PRB unanimously agreed that this officer’s actions went against the bureau’s professional conduct and anti-discrimination rules. According to the board, this was the second violation for “similar behavior” that this officer had made in three years. The board recommended this officer be placed on unpaid leave for a week, for punishment. But, instead of facing any punishment, this longtime officer retired.

The board is required to review all incidents where police use lethal force against a member of the public. Last year, they met to consider the fatal shooting of Koben Henriksen, a homeless man killed by PPB Officer Justin Raphael in December 2019 after Henriksen was observed wandering in traffic near Mall 205, waving knives at passing cars. (We know the names of those involved because this case resulted in someone’s death). The board unanimously agreed that Raphael’s actions were in line with PPB’s “application of deadly force” policy, as it appeared Henriksen was going to assault or injure someone, “unless intervention occur[ed]”. Per the report, the PRB believed that Raphael “made the decision to use deadly force to protect themselves, employees, and others in the area.” Because of this decision, Raphael faced no punishment by PPB for killing someone while on the job. Raphael was also cleared of any criminal charges for killing Henriksen by a grand jury a month after the shooting, with jurors finding that his actions were a “lawful act of self-defense.”

During a protest that had been deemed an “unlawful assembly” on June 8, 2020, several PPB officers observed two individuals in downtown Portland run west, contradicting orders from PPB to move east. In particular, these two people were running toward the Multnomah County Justice Center, the building where most of the evening’s protesting was taking place outside. One officer chose to respond by shooting a “less-lethal” launcher at one of the individuals. It’s unknown if the person was actually struck by the munition, as officers did not follow them. The officer claimed to believe that “the subjects intended to cause harm to police officers” who were outside the Justice Center. The PRB believed the officer.

“Based on the direction in which the subjects were running, the majority of the Board believed the subjects intended to cause harm to the public or other officers,” the report reads. “One board member said the act of running towards the riot scene, rather than away from the enclosed area, clearly showed the subjects’ intent to engage in aggression. Two members said the use of force was justified because the suspects did not comply with the order to disperse.”

A minority of the PRB argued that the officer was wrong to use such force against the individual.

“One board member believed Employee 1 was reacting to the subjects’ noncompliance and showing them, by force, that they were heading in the wrong direction,” the report reads. “This board member did not believe the subjects posed an immediate danger because they were running away.”

Yet, the majority of the PRB dismissed the idea that the officer had inappropriately used force, and simply suggested that PPB offer better training on when to use a less-lethal launcher. Chief Chuck Lovell went further, advising PPB management to send the officer a “letter of reprimand” for his conduct, suggesting that Lovell believed the officer did act inappropriately.

The PRB reviewed another protest-related case from last summer, this one involving an officer pulling down a protester’s gas mask before shooting them with pepper spray. The investigation into the officer’s use of force was instigated after a member of the public shared a video of the incident posted to social media with IPR. According to the officer, the individual was trying to grab the officer’s baton at the time. The majority of the PRB agreed that this force was appropriate, explaining that the officer’s action “met the directives based on the threat and active resistance from the subject who was not obeying orders and pushing and grabbing an officer’s baton.” The one member of the PRB who disagreed did so due to lack of sufficient evidence. Regardless, the dissenting member said the officer “took reasonable action to make the [pepper] spray effective.” Instead of penalizing the officer, the board recommended that PPB update their training to address “new protest tactics” and use body cameras. Both of these issues are being addressed by PPB this year. Deputy Chief Davis advised against any punishment in this case.

Another protest case: An officer is accused of inappropriately using force against a member of the public during an August 2020 protest outside the former Portland Police Association (PPA) building. This officer attempted to shoot a less-lethal weapon at a person who was throwing eggs at officers, but missed—instead hitting another individual. The officer told the PRB that ”raw eggs could virtually blind officers if the eggs hit their face masks.” The majority of the PRB believed the officer acted appropriately, despite missing the intended target. Per the report, the PRB believed that the officer “used an appropriate use of force during the civil disturbance that night to deploy a less lethal shot at an aggressive subject, who posed a threat by putting the police and community at risk by throwing eggs at officers.” The board again urged PPB to adopt body cameras and review its protest response tactics. As he did in the previous two protest cases, Lovell directed management to send the officer a letter of reprimand.