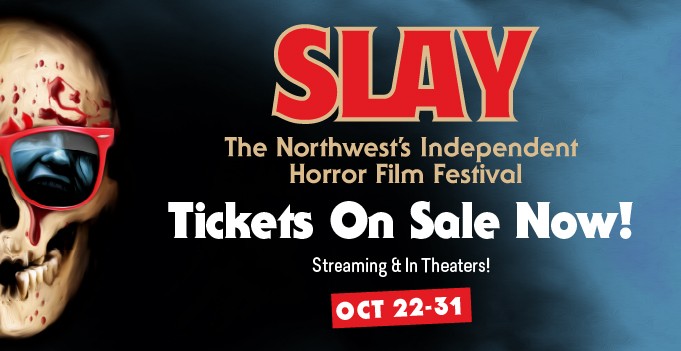 Get ready for a screaming good time… the terrifying fun of SLAY—our scary short film fest made by horror lovers like YOU—returns this October 22 through October 31, streaming online AND at the Clinton Street Theater!

Earlier this year, we asked filmmakers to send in their homemade short horror films (eight minutes or less) capturing whatever it is that scares them most—from classic ghost stories and slasher films to dystopian cults and political nightmares. AND BOY, DID YOU DELIVER! For the 2021 version of SLAY we have 18 frightening, freaky, and fun films that are guaranteed to scare the poop directly into your pants!

GET YOUR TICKETS HERE for the LIVE and in-person screenings at Clinton Street Theater on Friday, October 29 and Saturday, October 30, and if you’d rather stay home and watch it online, we have FIVE opportunities to do just that on October 22-31, and you can GET LIVESTREAM TICKETS HERE!

Want a sneaky peek at what you can expect from SLAY 2021? Then grab a spare pair of undies (just in case!) and read the descriptions and watch the new SLAY trailer below!

A Date With Death
After a disastrous date Mary returns home alone…or so she thought! A loving tribute to the Giallo genre made during lockdown.

Cute
A girl has an obsession with her cute appearance.

Edgar Allan Poe’s THE MURDER HOUSE
It’s as if there’s an EVIL in this house.

Face Off
Jenn’s bedtime routine is interrupted by a noise in the closet. Is it her overactive imagination, or is it her darkest fears brought to life?

First Date of The Dead
Even when zombies walk the Earth, romance isn’t dead…

Legs
It’s a perfect summer day for paddle boarding, but this beach isn’t what it seems. There’s something in the water and it wants what you have.

Gary
A man contends with his smart home, and the horrors of its past.

Mill Creek Strangler
A woman obsessed with a local serial killer finally gets to meet him one night when he shows up to her house to kill her.

The Executioner
John wakes up in the middle of the night and battles between what is real and what is not.

Projector
Houses aren’t the only things that can be haunted. This film will make you think twice about shopping second-hand.

Slash-O-Lantern
It’s been 3 years since a mysterious killer murdered Kevin’s brother on Christmas Eve. This Halloween, Kevin faces a terrifying showdown when the masked madman returns—but this time, he’s ready for him.

The Lake
When a young man takes his girlfriend out on the lake to propose, they are faced with the dark spirits beneath the surface.

The Midnight Jester
Jenny is heading home after work when her night takes a terrifying turn with the arrival of a stranger, dressed as a Jester.

The Thing In The Tub
Everything was coming up aces for associate professor Wilkins, that is until he brought home a lab sample… and left it in the tub.

The Things We Do For The Kingdom
A priest is called to a house but discovers everything is not as it seems.

The Parental Reconstruction
A man attempts to rebuild his deceased mother using body parts stolen from a being that once used to resemble a human, but has been reduced to something far less.

Road Trash
Alice can’t help but bury every dead animal she comes across. One day, she buries something she never should have touched and pays for her kind act dearly.

Sunburn
A mysterious airborne pandemic causes a mother and daughter to become deathly sensitive to sunlight.

If you think those sound absolutely terrifying and fun, you’re right! So don’t miss the screamingly enjoyable SLAY 2021, coming to you online and in theaters October 22-31!