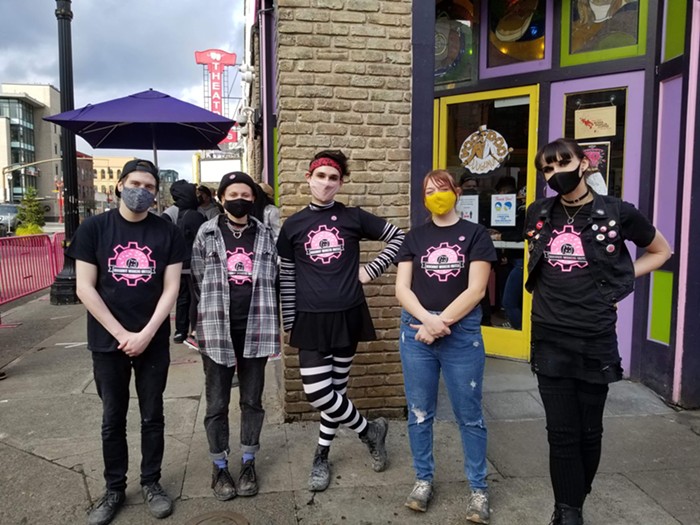 Voodoo Doughnut illegally fired seven of their employees who went on strike during Oregon’s record breaking heatwave in June, the National Labor Relations Board (NLRB) found this week.

A dozen workers at Voodoo Doughnut’s Old Town location refused to work June 27 and 28 when temperatures in Portland reached 115 and 116 degrees. The heatwave, which killed over 100 in Multnomah County, was exceptionally dangerous due to the high overnight temperatures, which allowed the heat to compound day over day.

According to Doughnut Workers United, the local Voodoo Doughnut union, several employees expressed concern about the store’s temperature to the management even prior to the heatwave. Mark Medina, an organizer with the Portland chapter of Industrial Workers of the World (IWW) that represents Voodoo workers, said several employees experienced heat exhaustion and went home ill in the days leading up to the record-breaking heat.

When employees raised their concerns to the store’s general manager, Medina said no action was taken. However, according to Medina, the manager did tell a group of employees that they could leave if they were concerned about the extreme heat. A manager at Voodoo’s Old Town Location declined to comment on the incident, when asked by the Mercury.

“It felt like there was no other option but to walk out,” Medina said.

Seven employees walked out of the store in protest of the working conditions the first day of the strike, with several others joining the following day.

“The weak A/C and water is not enough to protect the workers from the hottest day in Oregon history,” a Facebook post from Doughnut Workers United read on the first day of the strike. “The temperatures at Voodoo Doughnut have reached so high that multiple customers could not handle it for the short time they were in the store. The doughnuts themselves melt in the heat as the frosting never fully dries.”

Voodoo management has refuted these allegations in the past. “The store is air conditioned and we took measures to address warmer than normal conditions, including providing employees extended or additional breaks, and shifting production to early morning and late evening hours,” Voodoo Doughnut spokesperson Audrey Lincoff told the Oregonian in July. “Employee and customer safety is our highest priority; if we felt either were at risk during this time, we would have adjusted operating hours and otherwise made sure everyone was safe.”

When employees returned two days later after temperatures dropped down to the low 100s, nine of them were fired for workplace abandonment, prompting the IWW to file an Unfair Labor Practice accusation with the NLRB. The NLRB sided with the union in its Thursday ruling, finding that Voodoo Doughnut violated the National Labor Relations Act by firing workers in retaliation for striking.

“The company was well aware that their actions were illegal retaliation,” read a statement from Doughnut Workers United following the NLRB’s decision.

The NLRB is currently forming a tentative agreement with Voodoo Doughnut that will require the company rehire seven of the nine fired employees, with back pay. Medina expects the finalized agreement to be reached in a couple days. While most of the illegally terminated employees have already expressed interest in returning to the company, workers will receive back pay regardless of whether they are rehired.

“While this is a great victory on behalf of workers, the company had nothing to do with it,” Medina said. “The company […] doesn’t care enough about workers until they’re forced to by the federal government.”

Voodoo Doughnut did not respond to Mercury‘s request to comment on the NLRB’s decision.

In a Facebook post, Doughnut Workers United alleged the retaliatory firings were intended to send a message to employees. Employees at Voodoo’s Old Town store founded the Doughnut Workers United union in March 2020, calling for more authority to negotiate wages and employee contracts. The company has not formally recognized the union because it wasn’t approved by workers during a vote to unionize this summer. However, the NLRB also found that the company created an atmosphere of fear in the workplace during the election, possibly contributing to the failing vote.

The NLRB’s findings set an expectation and precedent for a more fair and free union election in the future, according to Medina.

“[Voodoo Doughnut] made it clear that there was no equality of choices and voices in the workplace regarding what the working conditions should look like,” Medina said. “That was a huge settlement on behalf of workers and moving forward will provide us a kind of security that we will have a fair election. We’re not going anywhere.”