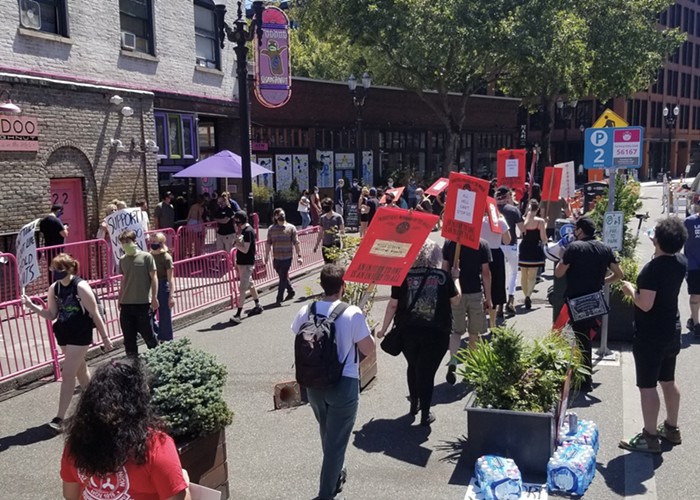 TGIF! Let’s get into the headlines:

• Make some time for this long read from OPB that examines Portland’s long history of anti-fascist and neo-Nazi clashes through the story of Jon Bair, an anti-racist skinhead who killed a white supremacist gang member nearly 30 years ago.

• The National Labor Relations Board found Voodoo Doughnut illegal fired Old Town workers for going on strike during Oregon’s historic heatwave. The company is expected to rehire seven of the employees with back pay.

In national and international news:

• Federal prosecutors are declining to file charges against the police officer who shot Jacob Blake in Wisconsin last year. The shooting, which left Blake paralyzed from the waist down, sparked several nights of protest in Kenosha where Kyle Rittenhouse shot three people, killing two of them. Rittenhouse’s trial begins next month.

President Biden stressed the sunny side of a disappointing jobs report on Friday, touting an unemployment rate that fell below 5% for the first time since the pandemic began. https://t.co/ISBFQiQAno pic.twitter.com/t7t97RC8vm
— The New York Times (@nytimes) October 8, 2021

• Facebook, Instagram, and WhatsApp went down for about two hours Friday, marking the second time this week that the major social networking sites were inaccessible. The network of apps went down around noon Pacific Standard Time due to a “configuration change”—whatever that means.

• A suicide bomber struck a busy Afghan mosque Friday, killing at least 46 people. The Islamic State took credit for the attack, stating they purposefully targeted Shiite Muslims and the Taliban for their perceived willingness to expel Uygher Muslims from the country.

President Biden restored the boundaries of Bears Ears and Grand Staircase Escalante national monuments in Utah that were dramatically reduced in the Trump era. Here are scenes of the majestic terrain.https://t.co/bbPtapyrF9
— NPR (@NPR) October 8, 2021

• Get ready for the fun fright of your life with SLAY—the Mercury’s short HORROR film fest coming at ya online from Oct 22-31, and LIVE and IN-PERSON at the Clinton Street Theater on Oct 29 & 30! Get your tix now!

• The Mercury’s WING WEEK is here through Oct 4-10 with 24 creative wing dishes from your fave restaurants and bars—and they’re only $6 per plate! YES, PLEASE!