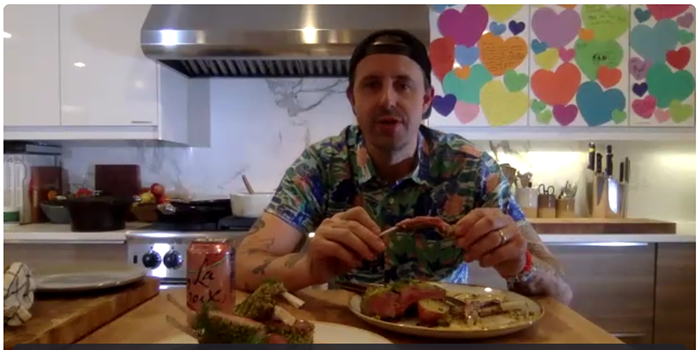 I’m a good cook, but nearly a year into home cooking, it’s time to shake it up. Fortunately, a number of local chefs and previously in-person cooking classes have shifted online, allowing some new inspo to flow.

I tried two classes—seared scallops with Le Pigeon Chef Gabe Rucker and filled handmade pasta with Leta Merrill—and scoped out a few other promising offerings as well. As a home cook who would rank herself advanced, I did both classes with someone less experienced, in order to get a vision of what it might be like for all skill levels.

When the pandemic first started, celebrated Chef Gabe Rucker and his fam started an Instagram series, Cookin with the Ruckers (which are still available on YouTube). The project was such a hit, Rucker made it a professional affair as the Dirty Bird Dinner Club.

Now aspiring home chefs can pick up a box full of partially-prepped ingredients for a three-course meal for two, then spend a couple hours with Rucker as he preps the meal. I jumped at the chance to snag a chance to learn to make proper seared scallops, and invited along my dad, who loves those li’l bivalves.

First course was a salmon tartare with fried wontons, followed by those scallops accompanied with a coconut tomato sauce, and finally, a pandan panna cotta with citrus and candied peanuts.

Rucker is known for prep-heavy dishes that can take days of pre-work (I’ve tackled some recipes from Le Pigeon’s cookbook and can attest to that personally), and the Bird Box splits the middle nicely. The salmon for the tartare, for example, was cut up for us by Rucker, but the tumeric, ginger, and lemongrass for the coconut sauce was ours to peel and dice. 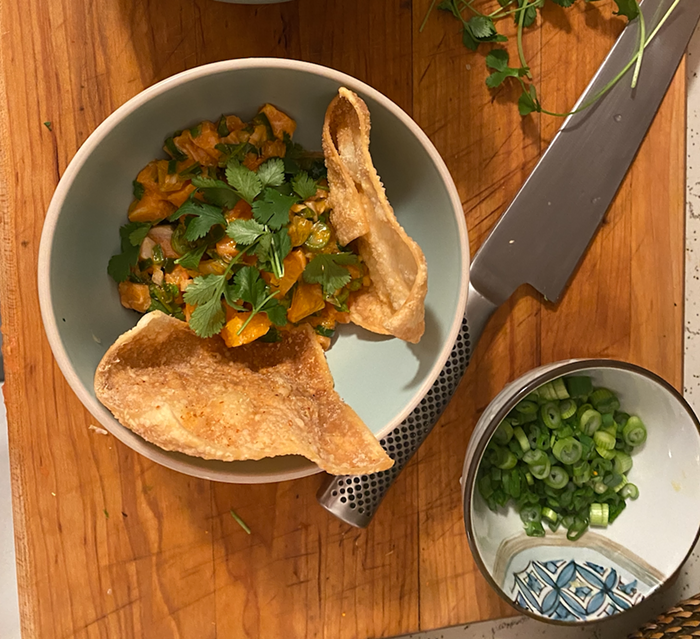 The box comes with recipes, and I did some of the knife work before the class, worried I’d run behind, but with two people, it isn’t necessary. Plus, if you do it along with Rucker, you’re apt to pick up tips—like you should peel your ginger with a spoon; it’s easier than with a veggie peeler.

My dad served as an able sous chef, slicing tomatoes in half and making sure we heard Chef Rucker’s instructions as I stepped over a piping hot cast iron to sear off the scallops. The whole meal and class was $150, but I didn’t worry about overcooking those scallops as I had Rucker there to answer questions in real time, and watch him in action.

I think I’d have fared okay cooking alone, while my dear dad probably would have struggled to keep up if he were by himself; however, he said it definitely inspired him to try making it again on his own timeline. And together, we wound up with a meal I’d have been happy to be served at Le Pigeon itself—perfectly seasoned, awesomely inventive, and with six scallops that tasted all the better for knowing that it was the two of us who made them.

Classes sell out quickly, so keep an eye out for new offerings. Find out more here.

I’ve been so desperate to learn to make homemade pasta that I had it in my dating profile.

Thanks to a quaranbae, my thirst (for this knowledge, jeez) has been quenched. Owner Leta Merrill said she learned her pasta love as a toddler from her Sicilian great-grandmother, and ultimately she worked the pasta line at Union Square Cafe in New York City. Now in Portland, she makes custom homemade pasta orders, and teaches online classes.

Merrill’s setup was ideal, with a camera on her, and one on the process, and she ably walked us through the art of making pasta. For the filled pasta class ($40), you get recipes beforehand and shop for your own ingredients. (Merrill can also loan out pasta attachments for KitchenAid mixers and hook you up with the ideal 00 flour used in many high-end pastas).

There are plenty of online resources for making handmade pasta, but having Merrill on hand to assure me that my dough was the right level of shaggy as I kneaded, and give a nod to the thinness of the sheet we pulled through the machine, was a really excellent experience. Plus, paying for and showing up for a class (although you can also watch it later if you can’t make the class at the given time), meant I was actually going to follow through with my dreams of making the best tortellini in the Americas. 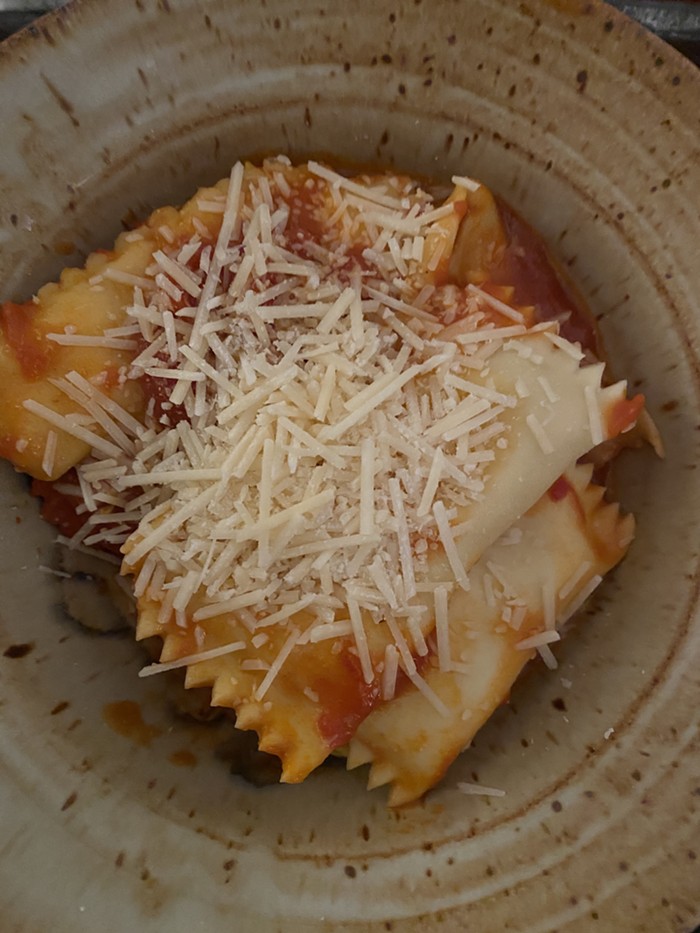 I didn’t quite hit that last part, but having Merrill walk us through numerous different shapes and sizes of stuffed pasta, and then watching my little dumplings float to the top of boiling water as they finished, was super satisfying.

Creole Me Up
Elsy Denvil advertises her Haitian cooking classes as events, and she’s not wrong. In April, she’s hosting a four week Haitian Cooking Boot Camp ($285): every Saturday for the month, she’ll lead an online team in the basics of Haitian cuisine and how to make seasoning blends and condiments.

Small Good Bakery
Never figured out what to do with that sourdough starter your friend gave you unasked for in April 2020? (Is that just me?) Baker Reva Castillenti recorded super comprehensive self-guided classes on demystifying sourdough, and making New York-style bagels at home for $45 each.

Hipcooks
Hipcooks’ North Williams location is one of several on the West Coast, so they’re able to run a huge variety of virtual classes—from mini chocolate lava cakes for kids, numerous dumpling crafting classes, and a few hot-looking Valentines cooking and cocktail sessions, and they’re all in the ballpark of $20-$30.