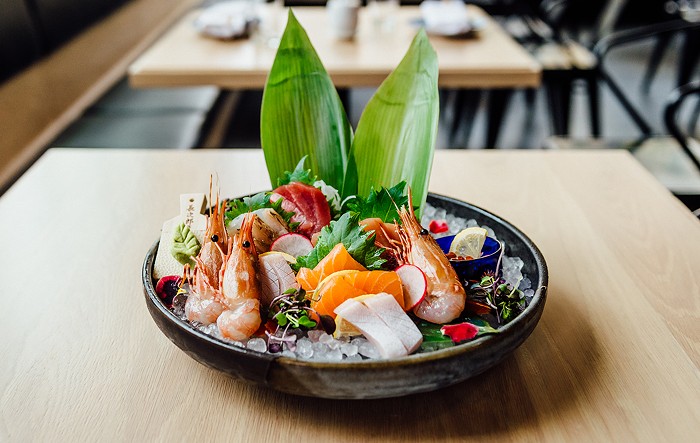 EverOut is The Mercury’s new website devoted to things to do in Portland and across the Pacific Northwest. It has all the same things you’re used to seeing from Mercury EverOut, just in a new spot!

Some exciting new options for Japanese food have landed on the scene, with this week’s openings of Afuri Izakaya and Momoyama and the recent opening of Hamono Sushi. Plus, a hip New England-style deli called Lottie & Zula’s has arrived, a food hall called Valley Public House with food from Tamale Boy and Ranch Pizza is coming soon, and In-N-Out is making moves towards Beaverton. Read on for all that and more food-world updates. For additional inspiration, check out our Portland food and drink guide.

NEW OPENINGS AND RETURNS
Afuri Izakaya
According to a press release, this buzz-worthy Tokyo-based restaurant specializing in yuzu ramen, which opened its first location outside of Japan in southeast Portland in 2016, celebrated the grand opening of its outpost in Old Town Beaverton on Thursday, October 22. The restaurant, which is currently open for takeout and delivery through DoorDash as well as dine-in by reservation, features an open kitchen layout so guests can peek at the process behind the scenes. The menu features classic izakaya bites such as karaage chicken and dumplings, in addition to nigiri and sashimi, sushi rolls, ramen, tsukemen, robata (Japanese grilled food similar to barbecue), and chirashi. Drinks include sake, wine, and beer.
Beaverton