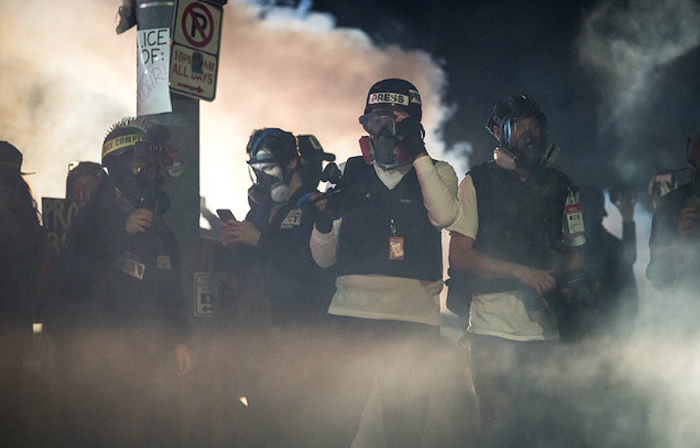 What’s it like for the reporters, photographers, and livestreamers who cover Portland’s protests on a nightly basis?

For nearly five months, protesters demonstrating against police brutality and systemic racism have marched in Portland and the city’s reporters, documentarians, and photographers were with them every step of the way, facing many of the same dangers. Now you can find out what it’s like to be a person recording history on the front lines of the nation’s Black Lives Matter movement with our Tuesday, October 27 livestream event, “Eyes on the Ground: A Conversation With Portland’s Protest Journalists and Documentarians.”

Join news editor and host Alex Zielinski of the Portland Mercury for a livestream conversation with the people who’ve been reporting on the protests for the last five months. You’ll hear honest reactions on topics such as their motivations, confrontations and arrests by police, journalistic ethics, personal safety, and how they keep their message centered on the Black Lives Matter movement. This is the type of behind-the-scenes, candid conversation you won’t be hearing anywhere else.

This is a “Pay What You Can” event with proceeds going toward supporting the Portland Mercury as well as the attending participants. If you wish to make an additional contribution to support the Mercury, please do so here.

If you want to know what really happens on the ground at Portland’s nightly protests, don’t miss this thought-provoking and fun evening of conversation from the reporters, photographers, and livestreamers who are committed to bringing you the truth!

Don’t miss “Eyes on the Ground: A Conversation With Portland’s Protest Journalists and Documentarians,” THIS COMING TUESDAY, OCTOBER 27, 7 PM. GET YOUR “PAY WHAT YOU CAN” TICKETS HERE!