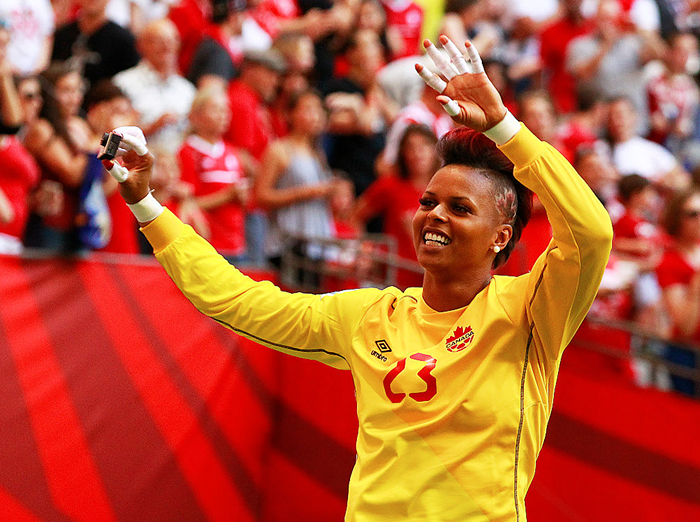 • The City of Portland in tandem with Multnomah County announced they will be devoting a whopping $38 million of unexpected tax money into helping the houseless across the region. Besides using the money for cleaning up certain areas, millions will also go toward funding new shelters, teams of behavioral health specialists, and outreach workers who will help get necessary services to those who need it most. (But! Mayor Wheeler will also get even more money to continue and increase his homeless sweeps.) Our Alex Zielinski has more!

• The Portland Thorns announced they’ve hired their former goalkeeper, Karina LeBlanc, as the club’s new general manager to replace the embattled Gavin Wilkinson who is under investigation for his potential role in the Paul Riley sexual coercion scandal. Abe Asher has all the details and background on LeBlanc who sounds very cool!

In an apparent nod to players’ demands, former goalkeeper Karina LeBlanc has been named the new general manager of the Portland Thorns. @abe_asher has the details and what this means for the state of the NWSL.https://t.co/wT4yCdanc8

• Look, I’m not saying this Mercury article had anything to do with it, all I’m saying is that last Monday we came out with our story, and today THIS HAPPENED: “Lender says it will repossess, redevelop Lloyd Center mall.” Ouch, and au revoir, Lloyd Center Mall.

• To combat a record number of traffic-related fatalities, Multnomah County is kicking off a new public health effort to analyze and identify the root causes of these unnecessary deaths in the region. Our Isabella Garcia has more!

• If you haven’t heard, comedian Niles Abston is FREAKING FUNNY, and he’s coming to town this weekend for a show. Check out this interview with Abston from Chase Hutchinson, and watch his killer, hilarious response to the not-so-funny Dave Chappelle’s transphobia.

• After hours of arguments, the Supreme Court has indicated a potential willingness to allow abortion providers to pursue a federal court challenge to the draconian anti-abortion laws in Texas… and it could be thanks to… creepy Kavanaugh??

Supreme Court Justice Brett Kavanaugh sharply questions Texas over the prospect that the legal machinery of its new abortion law could be used against other freedoms, including gun rights https://t.co/oWOuCdzMHJ

• Well, here’s a shocker: The Democrat’s “Obstructionist in Chief” Sen. Joe Manchin has hit the brakes AGAIN on the price tag for Biden’s social safety net plan, saying he needs more time to evaluate something he will probably never be capable of understanding.

• World leaders meeting at COP26 finally seem serious (or at least are acting like it) about climate change, ramping up the rhetoric about the “doomsday” that we will almost certainly face if they can’t all get on the same page about global policies. And even then, will that be enough?

As the UN climate summit gets underway, many countries have vowed to do more to fight climate change. Yet those plans still fall short of what’s needed to avoid a dangerous rise in global temperatures. https://t.co/fW6x2qUray

• If you find the time, do yourself a favor and read this absolutely fascinating/harrowing deep dive from the Washington Post into the “before, during, and after” actions of everyone involved with the January 6 domestic terrorist attack on the nation’s capitol. It’s a real eye-opener! (Apparently Trump did NOT appreciate the investigative report, and wrote a long, unrelated response filled with a bunch of lies… that the Post wisely chose not to publish.)

• QAnon crackpot Rep. Marjorie Taylor Green has racked up a whopping $15,000 in fines—just for refusing to wear a mask on the House floor. (Maybe she can trick her idiot supporters into paying for it? The Lizard People™ certainly aren’t going to do it!)

BREAKING – After threats that 10,000 NYPD officers could quit the force over the NYC vaccine mandate, the actual number going on unpaid leave today was 34.

• If you need a drink, you won’t want to miss the Mercury‘s “Shot & Beer” week, featuring creative, one-of-a-kind pairings of shots and beers from your fave local drinkeries. It all goes down from November 8 through 14, and you can get a taste of all the offerings here!

• And now… THE WEATHER REPORT: Clearer tomorrow with a chance of showers in the afternoon and a high of 58.

• And finally, this trick-or-treater has the right idea.