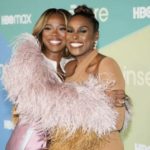 The study found that ratings and social media engagement for most groups, including white audiences, peaked for shows that featured casts that were at least 31% minority, while viewership among adults between the ages of 18 and 49 often peaked when a show had a majority minority cast.  – Time