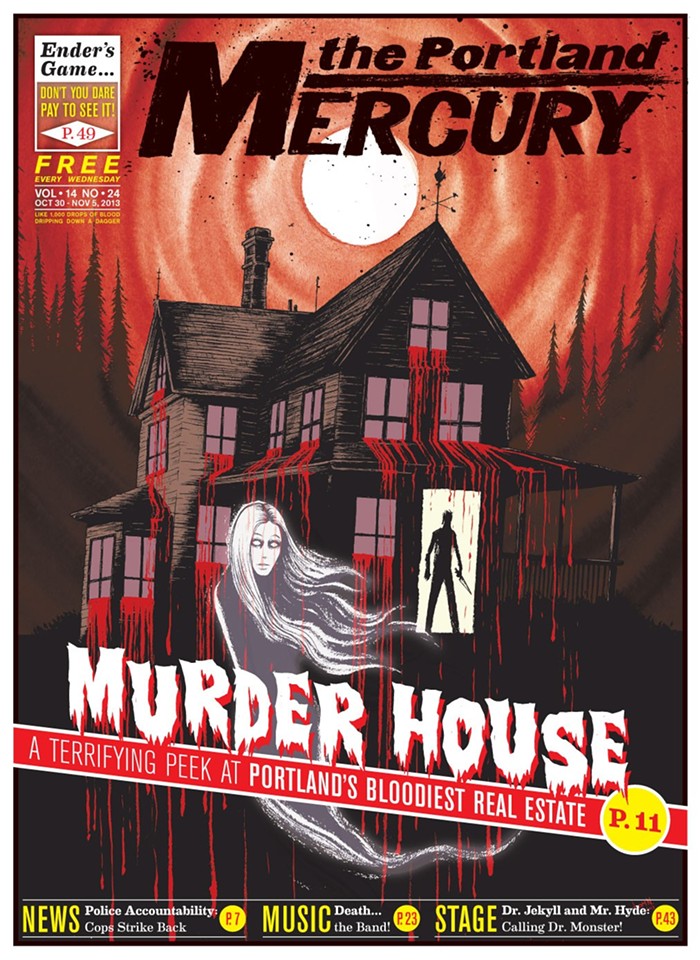 [Happy Halloween! All week long the Mercury has been publishing classic tales of local Halloween horror from our archives, as well as brand spankin’ new (and creeeeepy) pieces… in this one from 2013, Mercury writers recount some of Portland’s most infamous murders… that may have happened in a home near you. WARNING: These stories are factual and can be both gruesome and troubling.—eds]

ALL HOUSES have histories. And Portland has many old homes—but not many current owners know anything about the previous occupants… or the horrifying things that may have happened there. What follows are true stories of some of the grisliest murders of Portland past, and the homes where they took place. All the houses mentioned below are still standing and occupied—though we’ve redacted the exact street addresses to protect the anonymity of the current owners. (Much thanks to author/researcher JD Chandler for his help in choosing the following stories.)

“Do you want a swimming lesson?”

That was the offer 13-year-old Michele Dee Gates made to four-year-old Ruth Anne O’Neil on January 4, 1980—an invitation that would end her young life.

Michele had been Ruth’s babysitter on numerous occasions, and the older girl had agreed to escort the four-year-old to a nearby Herfy’s restaurant for ice cream. Instead, Michele lured Ruth to her house on SE 35th with the promise of teaching her how to swim. The teen dressed the young girl in a yellow bathing suit, and escorted her out to the four-foot-tall vinyl swimming pool in the backyard. It was unseasonably balmy that day, and the pool still had 10 inches of water at the bottom.

The young girl climbed in, followed by Michele. That was when the teen forced Ruth O’Neil’s face underwater and held her there until she drowned.

No longer struggling, Michele pulled the lifeless girl out of the water, removed her bathing suit, and put Ruth back into her street clothes—with the exception of her socks and underwear. She then carried Ruth’s body into a neighboring man’s backyard, and carefully laid her corpse onto a rubbish heap, hiding the underwear and socks in the neighbor’s shed—possibly to frame the man.

Michele had been very careful this time. She had learned a lot since drowning her male three-year-old cousin a year before.