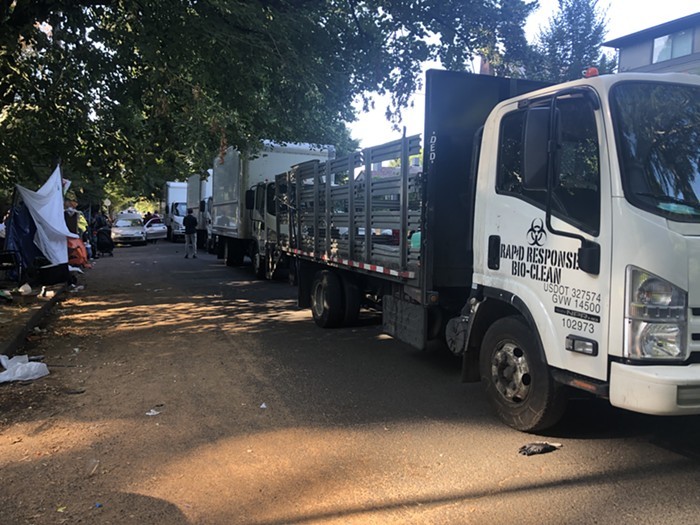 The family of Debby Ann Beaver, a Portland woman who died while living unhoused in 2019, has filed a lawsuit against Rapid Response Bio-Clean, the city contractor hired to clear homeless encampments. The wrongful death suit accuses Rapid Response of confiscating Beaver’s medication during a camp sweep, leading to her death a week later.

According to the lawsuit, filed by Michael Fuller on Wednesday afternoon, Rapid Response staff took Beaver’s medication on July 16, when the contractors were clearing the camp where she was living near the corner of SE 35th and SE Yamhill, bordering Sunnyside School. This medication was used to “treat symptoms from seizures due to a head injury, high blood pressure and diabetes,” the suit claims. It goes on to pin Beaver’s death on Rapid Response, because the contractor did not return her medication.

“Ms. Beaver’s loss of life was avoidable, and was a reasonably foreseeable result of Rapid Response’s wrongful behavior,” the lawsuit reads.

Beaver was found dead on July 24, 2019, at the same campsite location. Her body was first discovered by Rapid Response staff, who were conducting another clean-up. Beaver’s death certificate alleges that Beaver died from an “accident caused by illicit substances,” according to Fuller. Yet, Fuller added in an email to the Mercury, “It’s unclear whether the certifier was aware that Ms. Beaver was without her medication.”

Portland attorney Kelly Jones is the plaintiff in this case, as she was assigned to legally represent Beaver’s estate by Beaver’s husband Scott Rupp. The lawsuit requests a jury trial and $45,000 from Rapid Response to make up for both economic and emotional losses.

The city was aware that this lawsuit was on the horizon. Fuller first indicated his intent to file this lawsuit on July 28, a day before Rapid Response was scheduled to sweep a large homeless encampment in Laurelhurst Park.

“My intent is to get relief for this family,” Fuller told the Mercury on July 29. “A mother is dead and a wife is dead… and it doesn’t have to be that way.”

Fuller is involved in another case regarding the city’s homeless sweep process. Fuller is one of several attorneys representing unhoused Portlanders in a class action lawsuit against the city, which accuses the city of losing or discarding personal property during campsite sweeps.