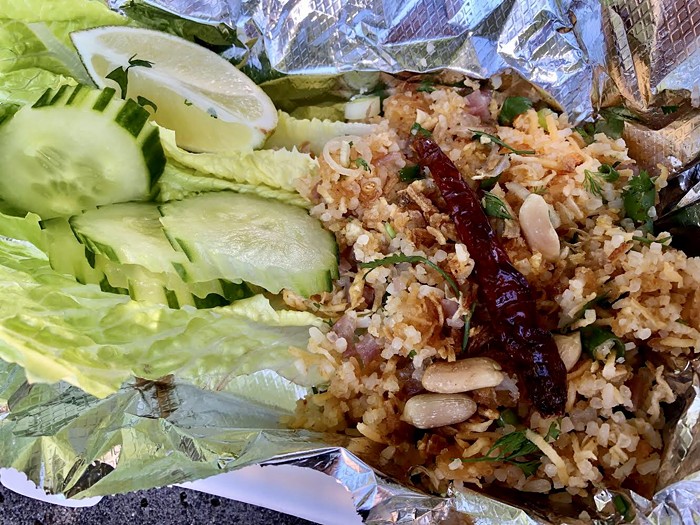 An unassuming food stand at the Vancouver Farmers Market, WeLa Lao has been quietly churning out some of the best Southeast Asian food in the Portland-metro area since May.

Last year, proprietor Suzanne Phengsy was displaced by the Almeda fire when it devastated the town of Phoenix, Oregon. She was readying to open WeLa in either Medford or Ashland, the two bigger cities that sandwich Phoenix. Instead, she lost all of her commercial kitchen equipment when the fire ripped through Phoenix two days after her birthday. That didn’t stop Phengsy from her mission of introducing people to the complex flavors of Lao food; she relocated to Vancouver to start afresh.

“People were like, ‘You could have done a lot to invest to [re]build your life, but you choose to do this,’” said Phengsy. “I’m like, ‘Well, what other way can I bring joy back into my life but to keep this alive? At least it’s the memories that I have… turn the tragedy into something positive, right?’”

WeLa’s menu is concise and strictly comprised of Laotian dishes, which is a welcome respite from places to try to do *the most.* I’m always open to being proven wrong, but there’s something about restaurants who make Thai food AND sushi that give off major red flags. I’d rather someone whole-ass one thing than half-ass two, y’know?

“We don’t have an extensive menu right now, but it’s not like we ever plan on adding 87 items… that’s unnecessary. For the little items that we do offer, our goal is just to make it the best, and that’s good enough for me,” said Phengsy.

The four main dishes, all handmade solely by Phengsy, are nam khao (crispy coconut rice salad), ping gai (chicken skewers), sai oua (herb sausage), and khao jee (savory sticky rice waffle). I tried the first three dishes, which were all hits for me, and will definitely be back for that waffle.

Full of texture and with just a tinge of sour flavor, I daresay the nam khao is addictive to anyone who tries it. The dish is a hallmark of Laotian cuisine and hails from the central region of the country in Vientiane, the capital. Its preparation starts with deep fried coconut rice balls that get broken up into the basis of the salad.

Phengsy’s rendition is not to be missed as it includes the traditional sour fermented ham. Most other spots that she’s seen substitute tofu or chicken for the fermented ham, but Phengsy was adamant on staying true to the dish, and went through a back and forth with the health department to include the ingredient. After some tenacity and over ten tries from Phengsy, the pencil pushers acquiesced, and that alone should earn the dish the privilege of your dollars.

Out of the two skewers I tried, the chicken looks and tastes a little more bland than the beef, which is fine since you’ll be dunking them into the real stars of the show, WeLa’s condiments. Both proteins are tender, which almost matters more to me in the scheme of things. Try them alone or accompanied by small handfuls of khao niew (sticky rice).

Sauce-wise, the jeow mak len, a roasted tomato sauce that bears a resemblance to salsa, has a spicy level of “2-3” out of 10. If you want to pretend you’re on your very own episode of Hot Ones, you can also go further up the spice scale (a “7-8”) with the jeow bong, a chili relish which Phengsy has put a modern twist on by making into a creamy aioli that I want to dip all sorts of things into.

Phengsy makes her sai oua, a flavor-packed pork-based sausage, a week in advance of market days since they require a good amount of prep work and are pretty labor intensive. The recipe was passed down through her family and is a regional specialty from Luang Prabang, Laos’ ancient capital.

She explains that while most Southeast Asian cuisines tend to use more cilantro, flavor profiles in traditional Lao cooking favor dill. This is the “secret ingredient” in the sausage… but I guess not so secret since she told me on the record? There’s probably multiple secret ingredients. In an effort to make her food more organic, she’s looking to work with local farmers who might be able to source and grow certain hard-to-find herbs essential to her cooking, like lemon basil.

Hang around on the side or the back of the stand while you wait for your food, and you’ll see the magic happen. I spotted the biggest mortar and pestle I’ve ever seen, and my family is from Southeast Asia, so that’s saying something. Also on deck is a traditional khao niew steamer and basket. Phengsy emphasizes that sticky rice is so integral to the cuisine and culture that Laotians have been nicknamed “the children of sticky rice.”

WeLa Lao will be at the Vancouver Farmers Market full-time starting in August (they currently only appear on Sundays) and will also start slinging food at the more intimate Camas Farmers Market on Wednesday afternoons. Stay tuned because Phengsy plans to debut laap tacos and a banh mi-esque (BUT NOT A BANH MI!) sandwich. Like neighboring Vietnam, Laos was colonized by the French, which resulted in locals adopting the baguette. You can also watch her Instagram for weekly specials like tapioca dumplings and papaya salad.