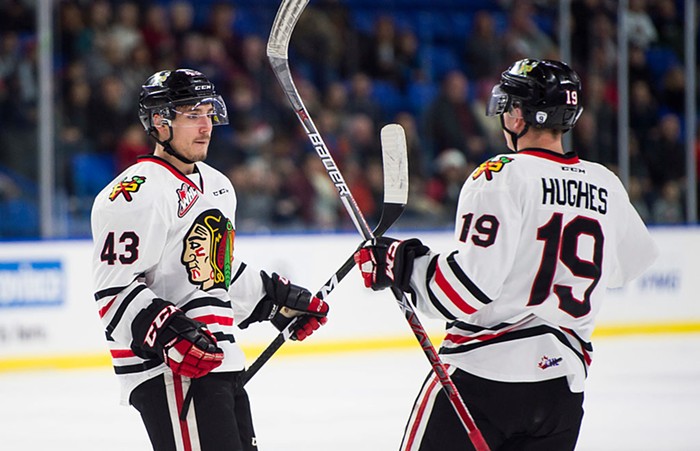 Stakeholders in the Native community celebrate the removal of the Winterhawks’ racist logo, but were not included in the decision. Rich Lam / Getty Images

• The Winterhawks, Portland’s hockey team, finally changed their racist logo from the profile of a Native American man with feathers in his hair to a hawk (Gee, it seems like that would have been a good design for the original logo?). While members of the Native American community have been pushing for the logo change, they were not included in the process—a decision that erased the opportunity for healing, some stakeholders in the Native community say.

• In response to the city’s housing crisis, the Portland City Council is exploring the development of six sanctioned camp sites for unhoused people across the city. Council is currently exploring potential locations for the so-called “Safe Rest Villages.” Check out the Mercury’s map of the 71 possible sites here.

• If you’re hankering for flavor-packed Laotian food, you might want to venture over the Columbia River to Vancouver. WeLa Lao, a food stand at the Vancouver Farmers Market, is “quietly churning out some of the best Southeast Asian food in the Portland-metro area,” according to Janey Wong’s latest food review!

Valuable new imaging of the geology off the Oregon, Washington and British Columbia coasts — and possible clues to the next big earthquake — comes from a specialized research vessel.https://t.co/NZd0Y40fK4
— OPB (@OPB) July 18, 2021

• This year’s fire season continues to be grim as the Bootleg fire in Southern Oregon approaches 450,000 acres burned, the largest fire in the nation. In a press conference Tuesday, Oregon Department of Forestry leaders noted the number of fires and acres burned during this year’s fire season is already 17 times the state’s 10-year average and urged Oregonians to stay prepared to respond to smoke or evacuate throughout the summer.

• The American Academy of Pediatrics recommends all students over two years old and school staff wear face masks regardless of vaccination status. That recommendation, announced this week, contradicts the Centers for Disease Control and Prevention’s (CDC) guidance that only unvaccinated students and staff should wear masks.

• As patrons flock back to restaurants, food service workers are calling it quits—about 5 percent of the industry workforce has quit every month this year. A recent survey indicated the issue isn’t just low pay, but the exhausting work coupled with minimal benefits and rude customers.

A clash between Dr. Anthony Fauci and Sen. Rand Paul erupted again on Capitol Hill, with each accusing the other of lying. Fauci rejected Paul’s insinuation that the U.S. helped fund research at a Chinese lab that could have sparked the COVID-19 outbreak. https://t.co/uZGiYXwvxF
— The Associated Press (@AP) July 20, 2021

3 major drug distributors and the pharmaceutical giant Johnson & Johnson are finalizing a $26B settlement to resolve thousands of lawsuits over the nation’s opioid crisis, according to 4 people familiar with the discussions. https://t.co/n5CAWEPuHs
— NBC News (@NBCNews) July 20, 2021

• From the makers of HUMP! and SPLIFF comes a new film fest that features short documentaries made by YOU! It’s called SCOOP! and you can find out more about it here.

• Too hot for ya? Get ready for a cool July because the Mercury’s SUMMER OF SLUSHIES is serving up $5 delicious, boozy frozen concoctions from your fave bars all damn month long!

• It’s a bad day to be the Oregon State Police’s social media manager: