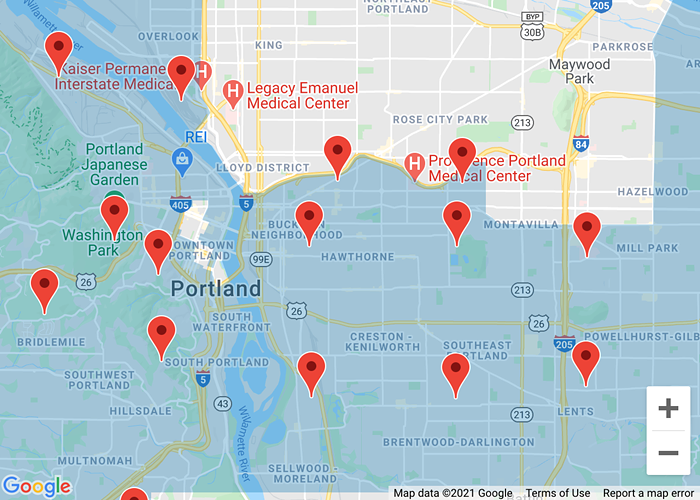 If you live in the blue area, you are literally powerless. Courtesy PGE

• Following last night’s ice storm that left a majority of Portland without power, PGE is frantically working to get people back on line, but they’ve got their work cut out for them with more than 4,900 miles of electrical wires down, 216 miles of transmission lines to be repaired, and more than 200,000 customers without power. So I suppose those of us without electricity are going to have to be patient. (By the way, today’s edition of Good Afternoon, News is being brought to you by the converter I took out of my camping gear, that was then attached to a car battery and plugged directly into my internet router. THAT’S SOME HARDCORE MACGYVER SHIT RIGHT THERE AND YOU’RE WELCOME.)

• By the way if you’re cold and need a place to sleep or just warm up, our Alex Zielinski (a lucky duck who has electricity, but I ain’t mad) has a great, and very necessary guide for you to check out!

How to get into an emergency shelter in Portland tonight, how to volunteer at one (to make sure they stay open!), what gear to donate, and how to keep helping those living outside this winter after the snow melts: https://t.co/6GMIOMuGkS

• Oregon’s beloved Enchanted Forest amusement park also experienced a lot of damage from falling ice during last night’s storm—but breathe a sigh of relief, because according to park officials, “HUMPTY DUMPTY IS OKAY.”

• The long-awaited Portland Street Response program is launching this week in Lents, consisting of mental health experts who will respond to people in crisis rather than the police, who… well, let’s be honest… are woefully unprepared for such encounters that occasionally lead to fatal results.

• Portland’s not the only place suffering from an icy power shutdown; a winter storm swept much of the nation this weekend, hitting Texas particularly hard and leaving more than 2 million without electricity.

• Following Trump’s expected acquittal by cowardly Republicans on Saturday, Dems are still pushing for justice. House Speaker Nancy Pelosi is establishing an “independent, Sept. 11-style commission” to find out who was behind the January 6 domestic terrorist attack on the nation’s Capitol. (Wonder how many more “get out of jail free” cards Trump is holding? Because he’ll need all of ’em.)

• Meanwhile Utah Republicans are planning to strike back against their own Sen. Mitt Romney for having the AUDACITY to vote in favor of convicting Trump, and are accusing him of being “an agent of the Establishment Deep State.” (Are they forgetting that the GOP has been the establishment for years?)

• Besides dealing with COVID, the economy, and (waves arms indiscriminately) everything, Busy Bee Biden is also busy determining his next steps regarding gun control, meeting with groups committed to stricter restrictions—though you best believe it’s gonna be an uphill battle.

• GOP donors gave millions to a scheme that would purportedly investigate “voter fraud” in the 2020 election. Now they’re asking for their money back because SURPRISE! The former president and his fellow grifters fleeced them! (Saaaad trommmmbooooone.)

• Unfortunately for the world, the social media platform for domestic terrorists, Parler, is back online and in business. (I’m sorry, but can’t the ice storm do something about those assholes?)

A D.C. cop who killed himself was struck by a metal pole during the Capitol riots https://t.co/TgCWc3c4JT

• Members of the Los Angeles police circulated a valentine featuring a picture of murdered Black man George Floyd with the words “You take my breath away.” Tell me more about how you think the police can be “reformed.”

• According to officials, the father of rapper Nicki Minaj was struck and killed by a hit-and-run driver.

• This Thursday, do not miss the second installment of the Mercury Music Series with a special performance filmed live at Polaris Hall by Yawa (AKA Amenta Abioto)! Get your sliding scale tickets here!

• And now… THE WEATHER REPORT: Say goodbye to snow and ice tomorrow as a mix of sun and showers return with a high of 45.

• And finally, unlike us, people in Amsterdam don’t give two FRICKS about ice! (But this nearly nude guy should have definitely cared a bit more.)