We need your help. The economic fallout of the coronavirus crisis is threatening our ability to keep producing the quality reporting you’ve come to love. If you’re able, please consider making a monthly contribution to the Mercury. 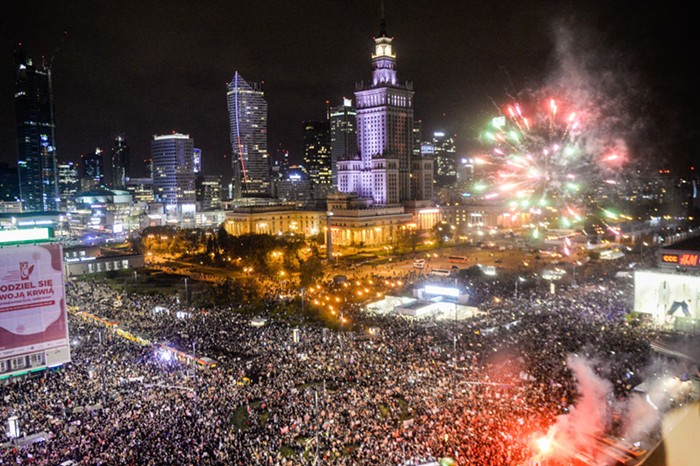 Good morning, Portland! Are you feeling bright and chipper with one extra hour of sleep? Yep, me neither. We’re two days out from an election that’s extremely consequential (except for middle-class, straight white men like John Mulaney), and I’m considering hibernating until next week, when the results might be more concrete. Who’s with me? Before we return to our caves of dread, let’s check in on this weekend’s news:

– It’s been four days since Clark County law enforcement shot and killed 21-year old Kevin Peterson Jr., and we still know very little about the moments leading up to his death. It doesn’t help that different law enforcement agencies are telling the press different stories—not that any of those stories are worth trusting. Hundreds gathered Saturday at the bank parking lot where he was shot to participate in a candlelight vigil—while heavily armed right wing activists menaced nearby to protest the memorial. On Friday, right-wing activists allegedly fired gunshots at another vehicle at the end of a Vancouver demonstration in honor of Peterson. No one was reported injured.

– Also at the Friday night demonstration, Portland activist and writer Mac Smiff was arrested for… asking directions? Here’s a video of the deeply questionable arrest:

– As we wait for clarity around Peterson’s killing, I recommend making time for this in-depth Think Out Loud conversation with two men and one boy about growing up Black in Portland and how they’re thinking about this year’s local and global call for racial justice.

– A new investigation by OPB and ProPublica digs into the stories of Jay Danielson and Michael Reinoehl—two men with similar upbringings but polarized political beliefs—and suggests that their deadly interaction on August 29 was a “harbinger of what the election could bring.”

– Across Oregon, a historic number of candidates of color are running for elected office—and many have a solid chance of winning on Tuesday. But as two Multnomah County races show, with more diverse candidates come new, important questions around the role of race in political campaigns—and how a candidate of color’s past experiences might be viewed differently than a white candidate’s.

– Due to COVID-19 constraints, locations that local officials used to rely on to offer extra shelter during the winter months are no longer available. So they’re asking for the public to help find space for 300 additional emergency shelter beds.

– A reminder that our previous president was, and still is, a baller (see also: shot caller).

– The 2020 election is on track to see historic levels of voter turnout. On Sunday afternoon, Americans had cast some 93 million early ballots—which is almost twice as many pre-election votes as were cast in the 2016 election. Keep it up!

– Some state courts are keeping legally cast ballots from being counted. But not in Texas! (Bet you didn’t see that coming.) On Sunday, the Texas Supreme Court rejected a request from GOP activists to preemptively throw out 127,000 ballots from drive-thru polling sites in the state’s most populous, and largely Democratic, county.

– Meanwhile, police officers in Graham, North Carolina assaulted adults and children participating in a march to the polls Saturday for no clear reason. Said the organizer of the march: “There are people that did not vote today because the police released tear gas and pepper spray.”

– According to the New York Times, a total of 20 counties in six states could decide the presidential election. Here’s a breakdown of which corners of the country you should be paying attention to as the results roll in.

– Thousands of Poland residents protested in Warsaw Friday after Poland’s top court upheld a ban on nearly all abortions. The demonstrations are the largest the country has seen since the fall of communism in the late 1980s.

– A group of unknown gunmen killed 19 and wounded 22 during a book fair at Afghanistan’s Kabul University Monday. The Taliban has denied involvement in the hours-long assault. Most of the casualties were students.

– Natural disasters devastated the Philippines and Turkey this weekend. Super Typhoon Goni killed more than a dozen people and left 125 towns left without electricity as it whipped across the Philippines Sunday. In the Turkish city of Izmir, a magnitude-7.0 earthquake left at least 39 people dead and 800 injured Saturday.

– And lastly: Sean Connery has died at the age 90.