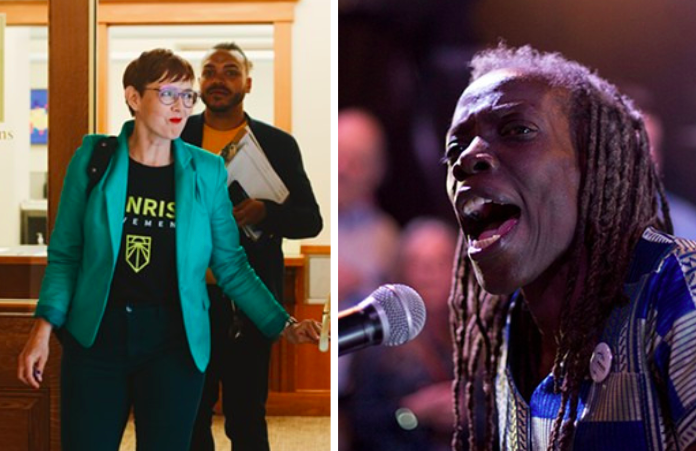 Hardesty has until now refrained from endorsing Iannarone, or popular write-in candidate Teressa Raiford, in the mayor’s race. That changed Thursday afternoon, when Hardesty threw her support behind Iannarone just five days before the election.

“This is a moment in history that requires strong and inclusive leadership, not more of the same status quo,” Hardesty wrote in a lengthy statement posted to her campaign’s public Facebook page. “If we are going to actually rethink community safety based on a public health model, we must be bold and visionary. Sarah Iannarone has a vision and a plan to do this that was developed and rooted in the community.”

Throughout the 150-plus days of ongoing protests in Portland, Hardesty has repeatedly disagreed with Wheeler over his actions in the role of police commissioner. Wednesday evening saw a heated Portland City Council meeting at which Hardesty urged her fellow commissioners to vote on her proposed $18 million budget cut to the Portland Police Bureau (PPB)—a cut Wheeler hasn’t endorsed. At the end of the meeting, the vote was pushed to next week, prompting Hardesty to call Wheeler and other commissioners “cowardly” for not responding to community demands for a vote.

However, Hardesty mentioned in her statement, “this is not a decision based on an isolated disagreement.”

Iannarone, meanwhile, has ran on a platform of police reform, and has been highly critical of PPB’s use of force against protesters. She has pledged to turn control of PPB over to Hardesty if Iannarone is elected mayor—an action Wheeler has refused to take.

Recent polls show a tight race between Wheeler and Iannarone—and while over half of Multnomah County voters have already turned in their ballots, Hardesty’s endorsement could be a deciding factor for some Portlanders who have yet to vote.

Hardesty is the only sitting city commissioner to endorse Iannarone for mayor. City Commissioner Amanda Fritz has endorsed Wheeler, while Eudaly and Ryan have abstained from endorsing a contestant.

“This is a pivotal moment in Portland history and we need to plot a new, truly progressive path forward,” Hardesty wrote in her statement. “These are exhausting and challenging times, but I look forward to working with Mayor Sarah Iannarone to continue engaging our community to build a more equitable and resilient Portland out of the series of crises we find ourselves in today.”

Iannarone responded to the endorsement with her own statement:

“I’m honored to receive the endorsement of a Portlander I so admire for standing up for justice and fighting for what is right. I look forward to serving with Commissioner Hardesty and to rolling up my sleeves alongside her as we work together getting Portland back on track.”