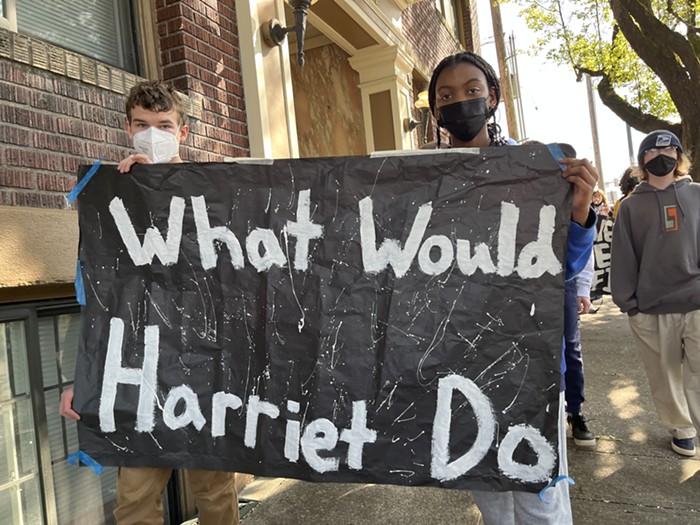 Six weeks after Harriet Tubman Middle School teacher Bryan Chu was placed on leave, his students are still demanding that Portland Public Schools (PPS) return him to the classroom. Facing significant teacher absences, students added that the district address the staffing crisis at Harriet Tubman to their list of demands this week.

“Mr. Chu’s removal is an immature example of PPS putting their petty workplace politics before students’ education,” Lauren Lockman, a 7th grade student at Harriet Tubman Middle School, said to the school board Tuesday. “We need teachers who care about us, and Mr. Chu was just that.”

Chu, a social studies teacher at Harriet Tubman, was placed on leave at the beginning of April followings allegations that he swore and yelled at a school board meeting, told a district staff member she “failed at her job,” said “shut up” to a student in the classroom, and encouraged students to write letters to the district opposing the planned expansion of Interstate 5 that would move the freeway closer to the middle school. Chu told the Mercury at the time that the allegations were over-exaggerated and that he believed the district was retaliating against him for speaking out against the proposed I-5 expansion and relocation of Harriet Tubman.

“At the end of the day, this is racist retaliation,” said Chu, who’s Asian. “The stuff that [PPS] says, it’s not really about that. It’s a bigger thing.”

Chu’s students have been walking out of their midmorning classes every Wednesday for the past six weeks and marching to the nearby PPS district headquarters at the Blanchard Education Service Center (BESC) in an attempt to get answers from the district.

According to the students, the district has not acknowledged the students’ demands for Chu to be returned to the classroom. Multiple students told the Mercury that the front doors of the district building were locked during the most recent walkout last Friday. Chloe Wolfson, an 8th grade student at Harriet Tubman, told the Mercury that the group of approximately 75 students could see district staff inside the building peering around the corner to look at students through the glass doors.

“People at the district acted like scared children while the students begging for answers acted like brave adults,” Wolfson testified to the school board Tuesday.

Chu’s removal from the classroom coincides with a PPS staffing crisis. The pandemic has stretched staff thin, both from teachers leaving the field and more teacher absences due to COVID-19 and quarantine periods. According to multiple students, about 15 of Harriet Tubman’s 34 teachers are replaced with substitutes on any given day.

On Tuesday, the majority of Wolfson and Lockman’s classes were taught by substitutes. Wolfson told the Mercury that she’s had five different substitutes in Chu’s class alone—almost a different teacher for every week of Chu’s absence.

Wolfson and Lockman both told the school board they are worried that they won’t be prepared for high school because of the inconsistency in their classes. Parents at Harriet Tubman share that fear.

Kamelah Adams and Molly Dwyer, both parents of 8th graders at Harriet Tubman, said their students are learning from substitutes giving out worksheets and showing videos that are below their learning level. Adams believes the issue stems from Harriet Tubman teachers not being given enough support from the district, which has prompted staff turnover.

“The whole school is in chaos,” Adams told the Mercury.

A 2021 survey of PPS teachers by the Portland Association of Teachers, the teacher’s union, indicated that more than 80 percent of teachers have such high workloads that they can’t complete them during their regular work hours and more than 1,000 educators said they were considering leaving the profession. 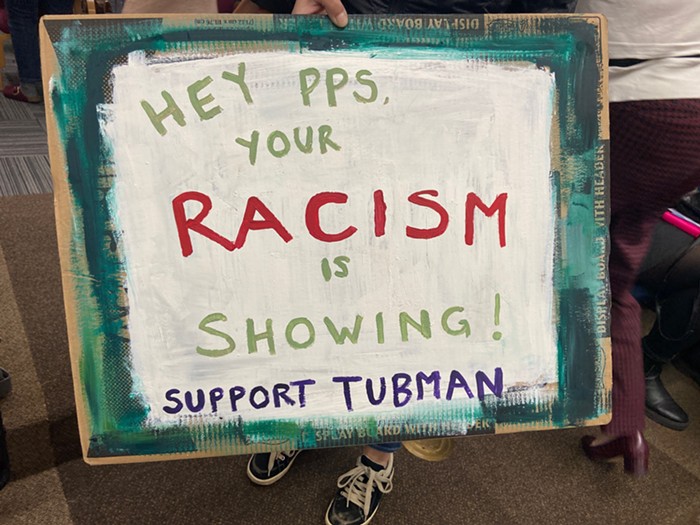 A sign during the May 10 PPS board meeting. Isabella Garcia

To Dwyer, the district’s lack of action to put long term substitutes or other solutions in place at Harriet Tubman sends a poor signal to students.

“There’s a whole building full of kids whose daily experience tells them that the people in charge of their education do not care,” Dwyer said.

In addition to demanding Chu be returned to the classroom before the end of the year, students and parents are calling on the district to place special assignment math teachers at Harriet Tubman for the remainder of the school year to address the lack of consistent math teachers at the school, assign long term substitutes for teacher absences, and hold a community meeting to address parents’ and students’ concerns for the next school year. Students are also calling for an audit of the district’s human resources practices.

The district did not immediately respond to a request for comment.

“We should be treated with the same respect you would give an adult,” Lockman said to the school board, “because there is no PPS without PPS students.”