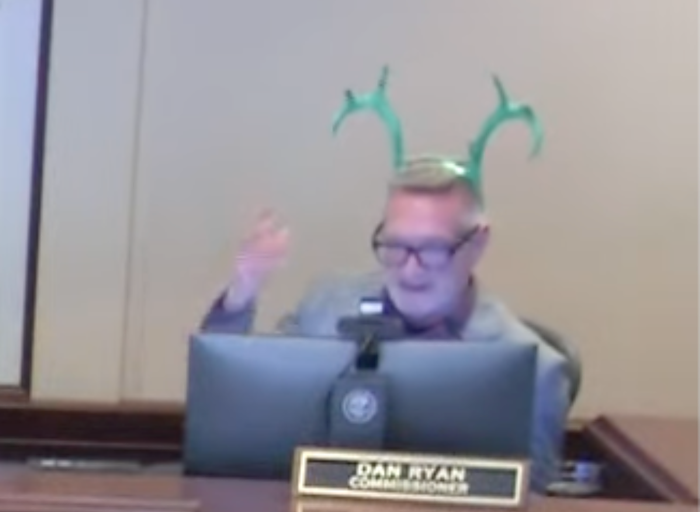 Half-human/half-elk Dan Ryan votes in favor of sticking a huge horse-drinking fountain in the middle of the street. Alex Zielinski

GOOD AFTERNOON, PORTLAND! Reminder that election day is only… *looks at imaginary watch*… ONLY SIX DAYS AWAY?!? My friends, there are some particularly troublesome candidates running for City Council who would end up making Portland’s rich people significantly more rich, and the rest of us? Significantly LESS SO. So vote smart with the Mercury‘s Election Endorsements! Portland will be glad you did. Now… ON WITH THE NEWS!

• Good thing there’s no longer a homeless crisis to be concerned about, right?

Commissioner Dan Ryan with elk antlers attached to his council computer monitor gives me the impression that he… might be putting them on for the Elk Statue vote today? pic.twitter.com/cR2qe4YeUQ


• For those keeping score, today Portland City Council unanimously voted to restore the damaged Thompson Elk fountain to its original, honkin’ huge, traffic-slowing size, because according to Mayor Ted Wheeler, “Bringing the statue back is more than just a statement of aesthetics… It’s a statement that people who break the law and break things do not get the last word in our city. We do.” Yeah, but he mostly voted in favor of total restoration because the dark money group People for Portland told him to.

• Students at Harriet Tubman Middle School are PISSED about current staffing for their classes, and particularly about the fate of teacher Bryan Chu who was put on leave by PPS, allegedly for speaking out against the proposed I-5 expansion and possible relocation of the school. Students are demanding the return of Chu as well as improving staffing for the school, and our Isabella Garcia has more.

Like many employers, the Oregon DMV is experiencing a staffing shortage. In the Portland metro region, DMV offices have seen a 25 percent dip in staff. https://t.co/c6N6kZ5D0U

• Today in “the shine’s off the apple”: Oregon-based drive-thru coffee chain Dutch Bros got some terrible news today when their stock (which opened last fall at $81 per share) dropped to a disturbingly low $23.53 per share. They’re blaming “inflation” rather than my teenage daughter who has single-handedly boosted their daily profits (while decimating my paycheck), but has been out of town for the past few days.

• Portland’s favorite place to stand in line, Salt & Straw, has an entire goddamn month of “flower-flavored” ice creams, and… WAIT, WAIT, WAIT! Before you roll your eyes, check out our Suzette Smith’s excellent review of her five top picks, and if it doesn’t have you drooling over these sweet cold treats, I’ll eat my hat (which is decidedly less delicious)!

• As expected, efforts by Dems in the Senate to codify abortion rights—even if the Supreme Court overturns them—failed today because of Republicans and the turncoat Manchin, for sure… but also because Dems refuse to nuke the filibuster. SO LONG DEMOCRACY, I GUESS!

NEWS: 49-51, Senate fails to advance the Women’s Health Protection Act, which would enshrine legal abortion nationwide, ahead of the SCOTUS ruling.

Democratic Sen. Joe Manchin, the last senator to vote, sided with all 50 Republicans to block debate.https://t.co/QvBcWktiDn

• A federal judge has lifted the contempt order against Trump—at least temporarily. But he says he will reinstate it unless the former prez pays the required $10,000 per day for every 24 hours he’s refused to turn over his shady financial documents to prosecutors. (That’s a total of $110,000 so far! Yay!)

A Florida trial court judge blocked a congressional map favored by Gov. Ron DeSantis (R) that would wipe out a voting district in North Florida represented by a Black Democrat. https://t.co/2gFlL7gWWD

• Ukraine is expected to start holding war crime trials for the Russian soldiers they’ve captured. First up: Sgt. Vadin Shyshimarin, who’s accused of gunning down and killing an unarmed 62-year-old civilian who was riding a bicycle.

• This doesn’t convince me there’s a god… but still: “A man died of a heart attack while burying a woman he killed, S.C. sheriff says.”

• And finally… when mimes show up at the gym.

what did we just watch pic.twitter.com/1Y0j9CNPTq