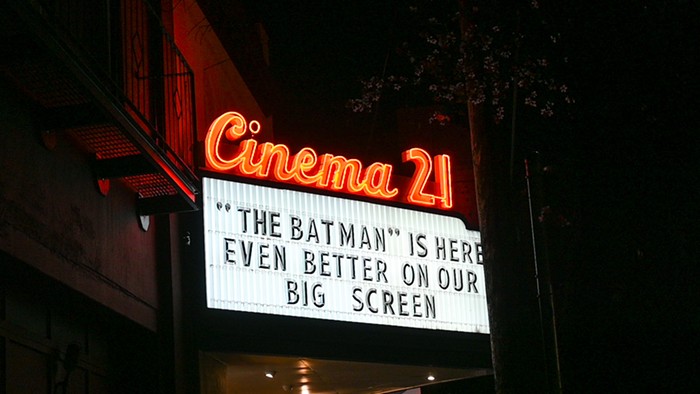 The Cinema 21 marquee on the opening night of a film that should have been called Mr. Batman. Suzette Smith

Movies in Portland got a little more accessible recently, as two local movie houses added open caption screenings to their regular repertoire. Cinema 21 announced the addition on Wednesday, and the Hollywood has offered open caption showings since a Sunday showing of Licorice Pizza, on March 13.

Anyone who’s watched a lot of films and TV has probably heard the phrase closed caption, which describes optional subtitles that can be turned on or off, which also may include notes about sounds and songs occurring in the film. Open captions are essentially non-optional subtitles. Everybody’s watching them together!

For decades, the workaround for hard of hearing audiences at the movies was sound amplifying headsets and caption readers, that unfortunately frequently malfunctioned in unpredictable ways (eg. “For some reason, this headset no longer works in Theater 2!”)

“We’re just keeping up with what’s happening nationwide,” Cinema 21 owner Tom Ranieri told the Mercury. “[Adding captions] was really expensive to do with film, but it’s not with digital.”

Though open captions are a method of making cinema more accessible to film fans with hearing loss, there are plenty of other reasons someone might enjoy them. At home, I frequently watch films with captions because my two favorite genres of cinema are mumbly, breathy atmospheric pieces with sparse dialogue and action movies with explosions and convoluted plot lines.

On an artistic level, widespread open captions could also present an opportunity for innovation. It’s interesting to imagine what Everything Everywhere All at Once will look like, owing to the film’s roller coaster free-fall pace and multi-language script. “It’s going to be chaos,” Ranieri ventured.

In the past, both Cinema 21 and Hollywood Theatre have worked with moviegoers who wanted to watch a film with open captions, but that required making a request and scheduling it with the theater. Now there will just be an expected open caption showing or two for each run, at conventional movie times.

“We’re trying to be proactive about it,” Ranieri said. “The National Association of Theatre Owners and state legislatures have been examining the question as to whether or not people who have hearing impairment are being served properly. This is also a chance to accumulate data so we know what we’re talking about in terms of how much interest there is.”

Ranieri said that his theater’s ability to offer open captions is still limited to whether a film comes with them. The deeply sound driven Memoria, for instance, does not carry an option for open captions—neither does the new 4K restoration of David Lynch’s Inland Empire, which Cinema 21 began showing today.

Cinema 21 is offering evening and matinee open caption showings for The Northman and Everything Everywhere All at Once on Sunday May 1 and Wednesday May 4. The Hollywood’s open caption screening schedule can be found on this page.