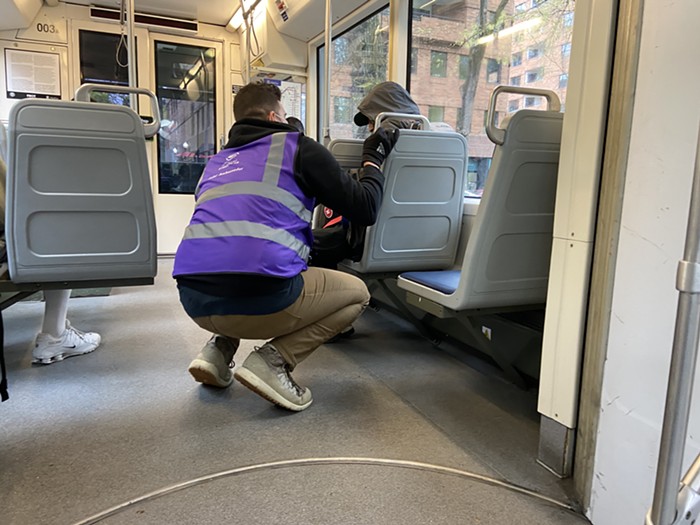 Clad in purple vests and backpacks, the Portland Streetcar’s Rider Ambassadors are the newest addition to the city’s changing public transportation safety landscape.

Funded by a federal grant that aims to encourage riders back to public transportation as the pandemic wanes, the streetcar’s team of five Rider Ambassadors started riding the system in mid-January. During the year-long pilot project, the team is tasked with providing a non-security presence that increases onboard support for homeless riders in an effort to provide a feeling of safety for all passengers on the streetcar. Despite being only four months into the pilot year, streetcar leadership is already looking to make it permanent.

Prior to the pandemic, Portland Streetcar staff noticed that they were either responding to or receiving complaints about the same handful of riders, most of whom were homeless or suffered from mental health issues. Wanting to find a way to respond to those passengers within the transit system instead of getting law enforcement involved, streetcar staff started to consider an in-house safety team that could proactively address potential conflicts by forming relationships with riders who regularly caused issues or simply deter unwanted behavior with the team’s presence.

As Portland’s homeless and mental health crises worsened during the pandemic and transit operators started to report an increase in assaults on public transit, transit agencies like TriMet and the streetcar also face the challenge of convincing commuters that public transportation is still a safe option.

“Some people really care about perceiving that the transit system that they use every day is safe,” said Rider Ambassador Jack Blashchishen, “and others care about how vulnerable people who maybe give those other people the unsafe perception are treated and that they have access [to public transit] because they need it the most.”

The Rider Ambassadors team—whose members have backgrounds in social services, de-escalation work, or transportation planning—occupies a space between enforcement and customer service. The team doesn’t have authority to check fare or enforce city code on the streetcar, like riders who are intoxicated or assaulting other passengers—that responsibility still lies with Portland Bureau of Transportation’s fare enforcement staff, supervisors, or the Portland Police Bureau.

The ambassadors’ role on the streetcar is similar to the role TriMet’s Safety Response Team plays on its more expansive system. Both teams, born out of a community call for less police-like security on public transit, are not tasked with any type of enforcement, carry backpacks with snacks and first-aid supplies, and are expected to build trusting relationships with riders while onboard the transit system. In contrast, the streetcar’s ambassadors are employees of the Portland Streetcar, not contracted from an external private security agency.

Local bus rider coalition Bus Riders Unite (BRU) criticized TriMet’s Safety Response Team when it was revealed that the team members were hired and trained by Portland Patrol lnc (PPI), a private security firm that has come under criticism for employee behavior and hiring decisions. PPI employees working downtown have been accused of harassing unhoused Portlanders and the company employs former West Linn police lieutenant Micheal Stradley, who played a key role in the wrongful arrest of Micheal Fessler in 2017, as a trainer. Following public backlash, TriMet changed its contract with PPI to ensure that Stradley was not responsible for training any of the safety team members.

“[TriMet’s safety team] are being trained with the same values once again,” Maia Vásconez-Taylor, an organizer with BRU, told the Mercury last year. “Just because they’re unarmed doesn’t mean that they don’t have a policing mentality.”

Bower opted to work in collaboration with BRU to develop the ambassador program and feels strongly about having the team members be employees of Portland Streetcar where they can set the tone of their training.

The ambassadors’ primary job, according to Bower, is to maintain a presence on the streetcar system and assist vulnerable riders when possible.

For example, on a drizzly and cold morning in April, Blashchishen and fellow ambassador Zeyaad Moussa started their four hour shift riding the streetcar system. When one rider who appeared to be homeless got on the streetcar without any cold weather gear, Moussa offered them hand warmers and fresh socks from his backpack. Later, Blashchishen checked on a passenger who was slumped over in their seat, offering them a water bottle and making sure they didn’t need medical attention or hadn’t slept through their stop.

According to Moussa and Blashchishen, the ambassador team is passionate about responding to behaviors, not targeting specific passengers because they appear to be homeless. Overall, the ambassadors say their goal is to keep all passengers safe on the streetcar.

“If anything, it’s preemptive,” Moussa said. “A lot of it is to make sure if [a rider is] going down a path where it could get worse, that we’re hopefully the first interaction that the individual has where its like ‘We see you and we want to make sure you are safe and getting to where you need to be.’”

The only time Moussa and Blashchishen’s interaction with a passenger has possibly escalated a situation was when Moussa asked a rider to put on a mask while the mask mandate for public transportation was still in effect. The rider, a person of color, asked if they were also making white riders wear masks which triggered an additional passenger to jump in and start a tense discussion about race. In that case, Moussa—who holds a degree in conflict resolution and de-escalation—acted as a buffer between the two passengers, engaging the initial rider in conversation until they arrived at their stop. TriMet bus drivers have also indicated that asking passengers to put on masks during the pandemic has triggered conflict and sometimes physical assaults.

Overall, Bower considers the ambassadors’ presence on the streetcar as low risk, high reward. In the best case scenario, the team can help connect people with nearby social service resources or refer unhoused riders to open shelters on a cold night. A poor outcome may require de-escalation skills, which the ambassadors are trained in, or someone being offended that the ambassadors offered them help in the first place, in which case the ambassadors can simply leave them alone.

So far, Bower said the feedback on the program has been overwhelmingly positive. Streetcar staff receive multiple emails from riders each week noting how much safer they feel on transit—Bower is collecting all the anecdotal feedback in a Google Doc that’s over 10 pages long. That feedback will play a key role in the pilot’s end of year evaluation by Portland State University’s Transportation Research and Education Center (TREC), as required by the federal grant, but the research team will also consider survey responses about how safe riders generally feel on the streetcar, referrals to other social services the ambassadors were able to give vulnerable riders, and estimates on how many conflicts were deescalated on the streetcar by the team.

Bower attributes the progress of the program and positive feedback to experience the individual ambassadors brought to the team.

“The people we were able to hire are making this program possible,” Bower said. “I don’t know if we would have been able to move forward if we didn’t have people who sincerely believed in the mission from the outset.”

However, the program’s success riding on the individual team members also presents a problem. As the local conversation around public safety systems shifts away from traditional security and policing towards services and deescalation, Bower says that the demand for people with the same skillset as the ambassadors is high in Portland. Additionally, because the ambassador positions are part time, several of the team members are in graduate school or balance other jobs that may eventually lead them away from the program.

Despite the competitive labor market, Bower is interested in expanding the group and extending its service hours. Currently, the ambassadors ride the system in pairs from 9 am to 1 pm and 4 pm to 8 pm six days a week, when the streetcar sees the bulk of its ridership. Bower is considering hiring more ambassadors during the pilot year to extend the program into the later hours of the night when more unhoused Portlanders ride the transit system to stay warm.

Following the pilot year, Portland Streetcar will have to find a new funding stream for the program to keep it running. For that challenge, the streetcar just started selling ad space which Bower believes could be used to cover the program’s $150,000 per year price tag.

“That way,” Bower said, “people who have to look at a Geico ad all day at least get to see the benefit.”