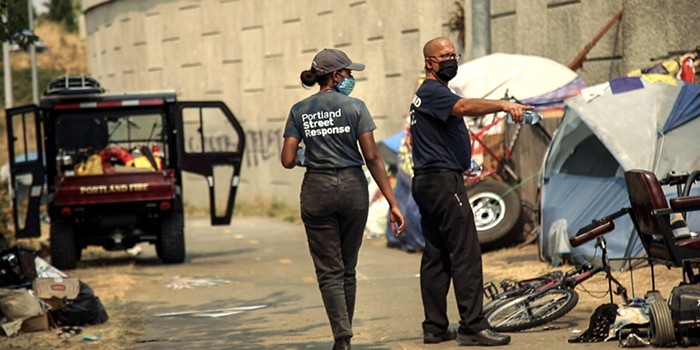 The wildly successful Portland Street Response program could get a HUGE boost from the Mayor. City of Portland

GOOD AFTERNOON, PORTLAND! In the currently WILD world of April weather, you can expect mostly overcast skies tomorrow with a chance of a late-day shower and a high of around 52. UNLESS YOU KNOW IT SUDDENLY DECIDES TO START HAILING ICE, BRICKS, AND LEMON-FLAVORED LOZENGES. Now, let’s look at some news.

• GREAT NEWS #1: Today Multnomah County leaders announced a new program dubbed “Move-In Multnomah,” that offers incentives to private landlords who agree to rent apartments to people who are trying to leave homelessness. What type of incentives? Like the county paying a tenant’s rent on time for a YEAR, and repairing any damage (if it happens). At least one landlord has tried it, and LOVES IT—and maybe our rich developer friends can encourage other landlords to do it as well? You know, if they actually want to DO something about homelessness, other than spread fear and lies? (Just a suggestion. Our Alex Zielinski has more.)

Life inside Multnomah County Jail facilities is disproportionately worse for people who are Black or have a mental illness, according to an audit released Wednesday.https://t.co/MKIwJewCy4
— Portland Mercury 🗞 (@portlandmercury) April 27, 2022

• GREAT NEWS #2: As we recently reported, the Portland Street Response Team was a BIG success in its first year of answering 911 calls about houseless people or those in mental distress, so the cops wouldn’t show up and… well, let’s be honest… shoot them. Maybe this is why Mayor Wheeler is set to propose adding even more support for the program, including nearly tripling the number of mental health work teams and extra money to help Portland Street Response work around the clock! All together now: OH HELL YEAH!

• GREAT NEWS #3: Our Isabella Garcia went on a ride-along with the new Portland Streetcar’s Rider Ambassadors program, which promotes a more humanitarian-forward approach to rider safety, as ambassadors have backgrounds in social services, de-escalation work, or transportation planning. The executive director of Portland Streetcar, Inc. is already calling the new program “a home run.”

“Real estate firm Killian Pacific is one of the new committee’s biggest donors, with a $50,000 donation to support the push for more shelters…”

“Killian Pacific filed a lawsuit against Multnomah County last month over the location of a women’s shelter on the Central Eastside.” https://t.co/WMMnQeuGPQ
— Alex Zielinski (@alex_zee) April 27, 2022

• (Not so) GREAT NEWS: Here’s your reminder that the wealthy real estate developers and biz owners of Portland are pushing as hard as they can to have voting power on city council, while pushing for a cruel, tax siphoning homeless ballot measure for the November election. And heyyyyyyyy… this is weird… but these same wealthy people are apparently behind People for Portland, the “Everyone Deserves Safe Shelter” PAC, and Portland United. Do Portland a favor and don’t get suckered in by these bullshit artists.

Due to last week’s presidential fly through, you may have missed visiting former Portlander Monica Lewinsky’s epic, nostalgic coffee cake quest. We have the solution and best moments of the ensuing coffee cake discourse.https://t.co/xQCKiCgMm5
— Portland Mercury 🗞 (@portlandmercury) April 27, 2022

• Russia’s latest evil move: Cutting off the gas supplies to Poland and Bulgaria, two NATO countries, in a bald-faced attempt at striking back against European sanctions. Meanwhile a series of explosions have taken place *inside the border of Russia* near Ukraine, which could signal a new spread of the conflict.

A Minnesota state agency found that the Minneapolis Police Department has engaged in a pattern of race discrimination for at least the past decade.

• An optimistic Dr. Anthony Fauci is saying that America is exiting its COVID “pandemic phase,” and into the “control” stage—meaning fewer deaths and hospitalizations. Next up: “elimination” of virus and then “eradication”… but don’t get your hopes up for that one.

• A former member of the US military has been released from imprisonment in Russia during a prisoner exchange—but what does this mean for WNBA star Brittney Griner who also remains behind bars over there?

President Joe Biden has signaled he might forgive some student loan debt and further extend the federal moratorium on repayments.

His remarks came during a wide-ranging Monday meeting with seven members of the Congressional Hispanic Caucus. https://t.co/jwLuJO8xD3
— The Associated Press (@AP) April 27, 2022

• Today in “EW“: “Illinois family finds preserved McDonald’s food from over half a century ago in home’s wall.”