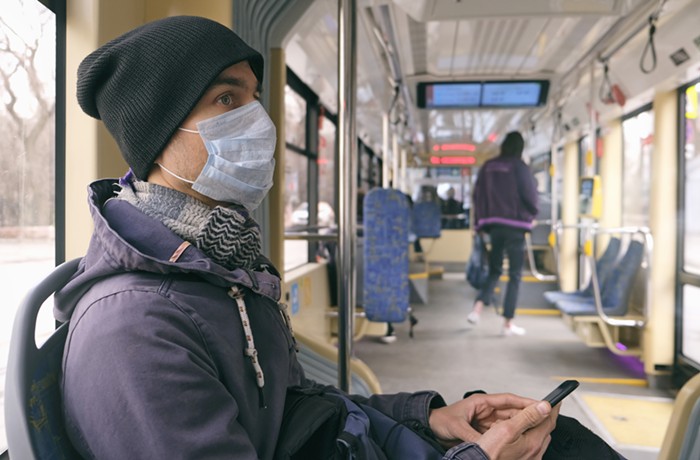 Multnomah County Public Health Director Jessica Guernsey says you should continue to mask up on transit, like this nice-looking person! Just making assumptions about people who wear masks over here! Gargonia / Getty Images

Good Afternoon, my rain-bedraggled stoners. Get on your impenetrable parkas, and run into the evening, seeking nuggets of wisdom and slices of glory. This is what makes us Portlanders!

• While masks are now optional on TriMet busses, MAX trains, and the Portland Streetcar, Multnomah County Public Health Director Jessica Guernsey issued a statement, in response, asking people to continue to mask-up indoors. She stressed that while the recent federal ruling changed what can be enforced, it doesn’t magically reduce the risk to the immunocompromised.

• 44-year-old Jeremy Levi Gurtner was found dead on April 8, in the Columbia River Slough, the victim of an apparent homicide. The Multnomah County Sheriff’s Office hadn’t made his death widely known, but now they’re seeking tips from the community on the circumstances of his disappearance and death.

• If you celebrate the most hazy of holy days, check out our list of 420 events for festivities near you. For instance, tomorrow—and tomorrow only—the Trap Kitchen food cart is serving up a “wake and bake” fried chicken sandwich, loaded bacon cheddar fries, and deep-fried Oreos. Now that your munchies know what they can have, you’d better not disappoint the future, stoned you.

Some people like to play rough… but how rough is *too* rough? Dan Savage (with some expert assistance) has the answers to your kinkiest questions in this week’s SAVAGE LOVE!https://t.co/kWvln1HwD6
— Portland Mercury 🗞 (@portlandmercury) April 19, 2022

• More details emerged today, in the case of Patrick Lyoya, a refugee from the Democratic Republic of Congo who was shot and killed by a police officer in Grand Rapids, Michigan on April 4. The independent autopsy report confirmed the strange circumstances of the shooting. The police chief in Grand Rapids says he will only release the name of the officer who shot Lyoya if the officer is charged.

• Is it strange that I will be spending this Wednesday after work reading all the Taylor Lorenz articles that I’ve missed behind that ineffable paywall? It’s not that I don’t have a Washington Post subscription—I do—but I’m TOO LAZY to log into my account. Hoorah!

Just announced: @washingtonpost website will have *free* access from Wednesday (around 2:30 pm) to Friday (ends at midnight).

• In the past three months, Netflix lost 200,000 subscribers, and its stock fell 25 percent. And sure, it’s easy to say “ha HA, maybe you shouldn’t have raised rates by $1.50 in January.” But Vox points out that Netflix hasn’t actually lost subscribers since 2011. You all don’t care about the second season of Russian Doll?!

• CALLING ALL PIZZA LOVERS! Your favorite week of the year is here: It’s the Mercury’s PIZZA WEEK featuring $3 specialty slices at 28 locations across the Portland area, starting NOW through Sunday, April 24! Eat ’em up!

• In closing, this is joke true about grad school and also about interviewing: