The Boys Of 98′ Social Media + Brand Sensation taking of the world by storm release new revolutionary product while establishing themselves as a millennial powerhouse. 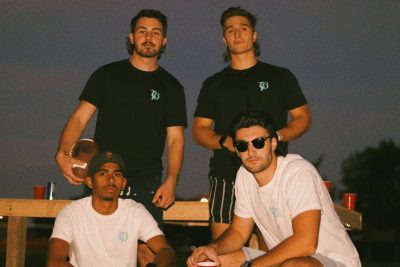 The group that is taking over the internet — also known as The Boys of 98 are currently on a college tour across the USA but that is not just it. The Boys of 98 could also be known as inventors and innovators. A common party trick of “shotgunning” among millennials has become an entertainment staple of getting the party started. The group has released a revolutionary product that sold out nearly 3,000 units.

The Boys Of 98, which is made up uniquely by a group of engineers, Matthew Cianci, Christian Camarata and Stefan Rebello, as well as a hands-on apprentice Matthew Maccarone created The Stinger. The Stinger solves a problem many college kids and millennials face when shotgunning. Poking a hole in a can before has consisted of using teeth (often what The Boys Of 98 would do), using keys, or using a traditional shotgun tool. The Stinger not only made the hole larger but revolutionized a different style and design from all other copycat products, The Stinger also represented the groups logo at the time of creation, a bee.

Taking all of the members of The Boys Of 98’s impressive academic backgrounds, The Stinger was just an idea before the group went to the drawing board and put their minds to work. The final product was 3-D printed and led to a Kickstarter Campaign which exceeded the goal by 20% in just 30 days. Since inception, The Boys Of 98 have spoken with multiple manufacturers and have sold out an additional 2500 products. Much of this is thanks to the rapidly growing number of loyal fans that the group has throughout social media, specifically on platforms like YouTube, Instagram, and TikTok The group plans on expanding and releasing a new collection in the coming months.

While traveling from college to college giving the gift of entertainment to millennial students all across the country The Boys Of 98 have encountered numerous fans that have shared their joys of using The Stinger. According to Christian Cammarata a member of The Boys Of 98 “it is probably one of the best feelings we can get seeing someone with a product we worked so hard to make and bring to life”

The group plans on continuing their college tour, bringing entertainment to millennials all across the United States. With a rapidly growing brand, community, and loyal fans one thing is certain, “The Boys” are here to stay and leave a positive mark everywhere they go.

The post The Boys Of 98’ Take Over The USA With A New Party Product first appeared on PRUnderground.