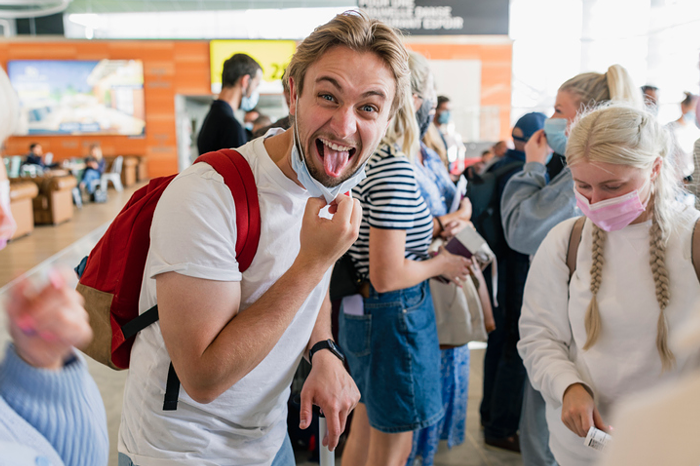 Get ready to see a LOT more buttholes like this at the airport. SolStock / Getty Images

GOOD AFTERNOON, PORTLAND! It’s gonna be a “rinse ‘n’ repeat” sort of week, with lots of showers, occasional sunbreaks, chilly to warmer temps, and (of course) the devil’s hail. LET’S DO SOME NEWS!

• Cannabis has come a long way since its early legalization days in Oregon, and now, though it’s hitting its stride, there are still a lot of details to work out… and that’s what the Mercury is covering in our latest Cannabis Guide called “Growing Pains… and Pleasures” hitting the interwebs today! SO MUCH GOOD STUFF!

Starting on Jan. 2, psilocybin – aka the psychedelic in magic mushrooms – will come to OR. But what will that actually look like, & who is it for? I wrote an FAQ on the messy intersection of politics, capitalism, science & equity for the @portlandmercury https://t.co/asLcw1zGR1
— Calley Hair (@CalleyNHair) April 18, 2022

• ICYMI, after failing TWICE to get the language for their sketchy ballot measure approved, local power-monger lobbying group People for Portland are attempting to fail for the third time—by taking the matter to court! (This is getting embarrassing!) Oh, and by the way, it turns out that the regional homeless tax that P4P is trying to siphon away for temporary shelters is actually making a lot of headway, already housing at least 500 homeless people into more permanent residences. Sooooo… what’s the purpose of these P4P folk again?

•  OHSU officials have apologized to employees for a phishing scam they perpetrated on employees—offering them up to $7,500 in pandemic assistance—and then saying, “surprise.” there is no money, this was a test to warn people about phishing scams. I guess it’s true: Teach a person to phish, and they’ll get phished for a lifetime.

• President Joe Biden is scheduled to visit Portland this week to talk investments into American infrastructure, so be on your best behavior, please.

• A Florida federal judge has struck down the CDC’s mask mandate for planes, trains, and other forms of public transportation, saying the agency has “overstepped its authority” and calling it “unlawful.” And prepare to be shocked to your very core: Trump appointed the judge. And it looks like Alaska Airlines had their marketing campaign ready to go:

• According to Ukraine President Zelenskyy, Russia has started its military push into the eastern part of the country, including attacks on the industrial heartland known as the Donbas, which the Kremlin says has always been their main objective. Meanwhile Russian missiles are also striking the western city of Lviv, killing at least seven so far.

• More April snow is coming (thankfully somewhere else), as a nor’easter is expected to dump up to 10 inches of the white stuff across the upper East Coast.

A private nurse testified Monday about searching a rented house for Johnny Depp’s severed fingertip in 2015: “I remember looking for his finger in the downstairs area. The house was a mess.” https://t.co/gypIWgL88n

• CALLING ALL PIZZA LOVERS! Your favorite week of the year is here: It’s the Mercury‘s PIZZA WEEK featuring $3 specialty slices at 28 locations across the Portland area, starting NOW through Sunday, April 24! Eat ’em up!

• And finally… and this is what the apocalypse will look like.