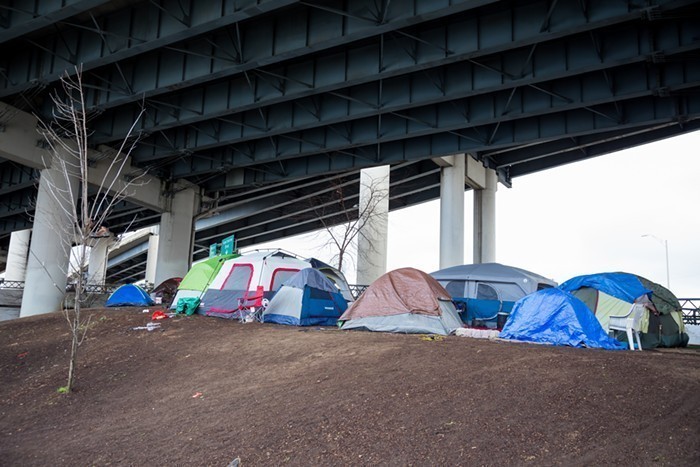 A cluster of tents under a highway overpass. JOSHUARAINEYPHOTOGRAPHY / GETTY IMAGES

Mayor Ted Wheeler unveiled the “first in a series” of executive orders Friday to address homeless camping in Portland.

In an afternoon press conference, Wheeler announced an immediate order to ban camping from high crash streets and intersections to protect the lives of those living outside.

The ban instructs Homeless and Urban Camping Impact Reduction Program (HUCIRP) to notify everyone camping near these specific roadways (identified in a recent report) to leave the area within 72 hours. If campers do not leave in that time frame, Wheeler said they won’t be ticketed or arrested.

Asked how this policy would be enforced, Wheeler simply stressed that the city “will not let people come back.” He said he supported fencing off these areas to keep people from returning.

Portland is required to follow a 2018 ruling by the 9th Circuit Court of Appeals, which prohibits cities from banning camping in public spaces if there are no alternative shelter options available. Wheeler said city outreach workers will “do their best” to connect evicted campers with shelter. 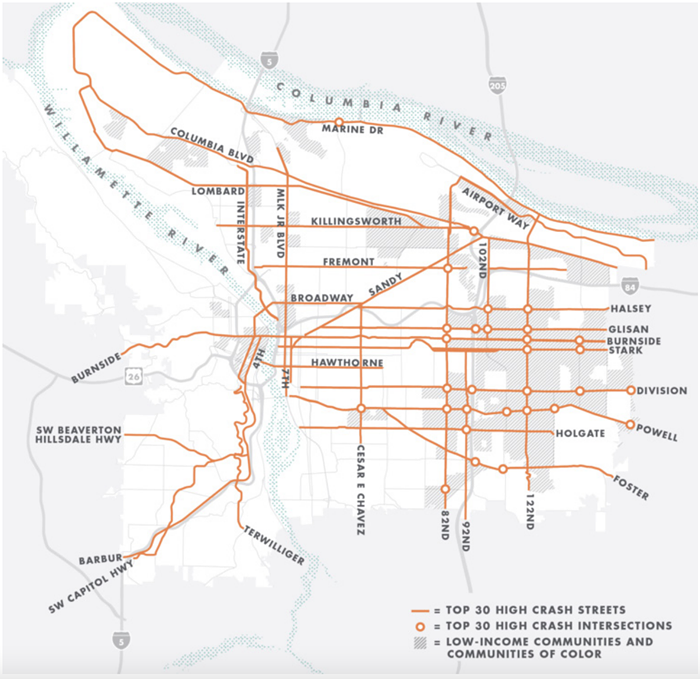 A map of Portland’s “high crash corridors” where camping is no longer permitted. PBOT

This order, which went into effect at 3 pm Friday, comes a day after Portland Bureau of Transportation (PBOT) released a report showing that 70 percent of Portlanders who were killed by cars in 2021 were homeless. Yet Wheeler did not consult PBOT before announcing this ban, nor did he discuss the proposal with City Commissioner Jo Ann Hardesty, who oversees PBOT.

Wheeler didn’t consult with any other City Hall staff before penning this order. An email sent to city commissioners’ staff Thursday afternoon shows that Wheeler’s office gave commissioners under two hours to read the proposed order and give feedback.

In a Thursday statement, City Commissioner Mingus Mapps endorsed Wheeler’s unilateral decision: “I applaud Mayor Wheeler for taking this common-sense approach to tent camping along high crash corridors. The no-rules perspective has led to unprecedented death. Mistaking chaos for compassion has led to historic death for houseless folks in every conceivable category.”

“The traffic fatality data is clear and alarming, and it requires a response,” Rubio said in a statement shared with the Mercury. “Over the coming days, as we learn more about how this will work from the mayor’s office, I intend to make sure that our efforts to reduce traffic fatalities also treat people with dignity and respect. These actions will naturally disrupt the lives of our houseless neighbors, and we cannot lose sight of those human impacts.”

Instead of using a policy to negatively impact victims of car crashes, the coalition suggested council penalize those who perpetuate the harm: drivers. The letter recommends that the city shut down all high crash corridors from car traffic and reduce speed limits on all other roads to 20 mph. It also lends this response to Wheeler’s recent budget request to add officers to the Portland Police Bureau (PPB): “Rebalance the city’s public safety budget to address the traffic fatality epidemic, beginning with reallocating funding set aside to hire 67 police officers to complete unfunded and shovel-ready projects in PBOT’s High Crash Network.”

Wheeler’s announcement comes on the heels of a Portland Business Alliance poll published Monday that showed that 81 percent of Portland voters believed that City Council was ineffective at providing public services and 79 percent support requiring unhoused people to sleep in shelters or designated camping locations. Wheeler said the poll had “no impact” on his decision to introduce a new camping ban, yet several sources within City Hall said it was a major influence.

Wheeler has been calling for urgent action on homelessness since first entering office in 2017, yet he’s never used the power of his executive office to fast-track a homeless policy. On Friday, Wheeler said the timing was based on a confluence of budget funding for HUCIRP and coordination with Multnomah County over additional shelter bed space created with Metro’s Supportive Housing Services tax funding.

“You need resources on ground to execute effectively,” said Wheeler.

This isn’t the first time a proposal to ban homeless camping has sprung from Wheeler’s office.

In May, Willamette Week reported that Sam Adams, one of Wheeler’s top aides, met with representatives from several different downtown law firms to discuss moving homeless campers to city sanctioned campsites. In October, Wheeler’s office suggested a strategy to ban homeless camping from areas of downtown Portland—and to move those campers into a “high-population outdoor camping zone”—yet the idea was rejected by fellow commissioners. At the time, emails between commissioners hinted that Wheeler’s office had wanted to open a shelter that could hold more than 60 individuals—a move that is currently banned by city zoning code.

Asked Friday if plans to open shelters holding more than 60 people would be included in a future executive order, Wheeler said he is “looking at larger-scale solutions across the board.” He said he spoke with Gov. Kate Brown Friday morning to request funding to create thousands of additional shelter beds in Portland.

Wheeler’s announcement dovetails with another decision made this week on homeless camping. On Friday morning, Wheeler joined City Commissioner Dan Ryan in announcing a new rule regarding the city’s planned “Safe Rest Villages”—a plan from Ryan’s office to create six outdoor shelters for unhoused Portlanders. While the shelters have yet to be developed, community conversations around where they may be located have angered neighbors who fear that a new homeless shelter will attract violence and crime. The new rule announced Friday attempts to address that by banning camping in a 150-foot “buffer” around these future shelters.

In a press release, Ryan suggested that the decision was made to somehow keep village residents from relapsing due to substance abuse.

It’s not clear when construction will begin on any of the safe rest villages.

On Friday, Wheeler said his traffic-related camping ban was unrelated to the village camping ban. Wheeler did not make it clear when to expect any additional orders from his office regarding homelessness.

“As soon as possible,” he said.