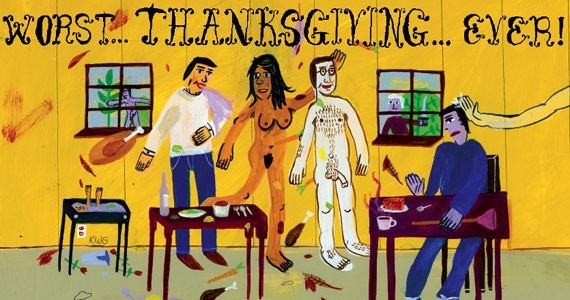 [The year was 2009. That’s when we asked Mercury readers to share their most disturbing, disastrous, and disgusting Thanksgiving memories for our “Worst Thanksgiving Ever” essay contest—and boy, did they deliver!—eds]

My old man approached the bird slowly and told me to get ready. The blade, longer than my forearm, trembled precariously in my hand. The old man took one step toward the bird, then another, but the turkey didn’t move an inch. It only stared at the old man as though it were watching some strange and uninteresting performance. Then, suddenly aware of what was going on, the bird raised its head, puffed out its chest, and lifted its tail feathers like a battle flag.

“Get ready!” the old man shouted, but I couldn’t tell if he was addressing the turkey or me.

He made a quick dive toward the bird, but it managed to jump clear of his grasp. The bird then began hopping from side to side, like a prizefighter, jabbing the air with its beak, while a terrible cackle emanated from somewhere deep within its throat.