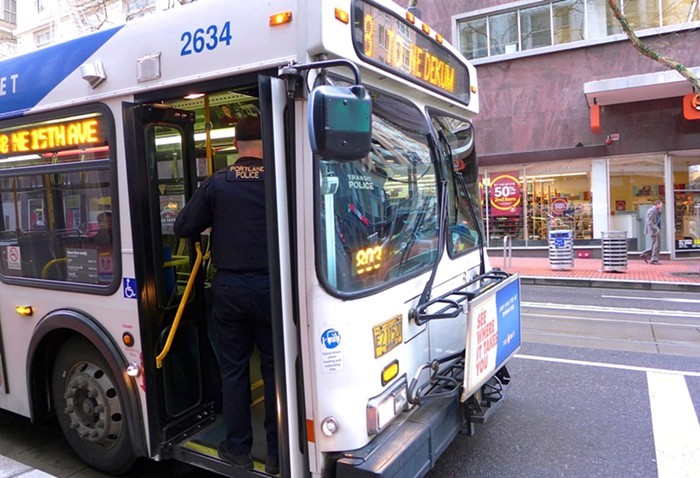 The person assigned to train TriMet security personnel was a former cop involved in the infamous false arrest of a Black Portlander. (Not a good look!) TriMet

• TriMet has done a quick about-face, requesting that former West Linn lieutenant Michael Stradley be removed from his post of training security personnel on trains and busses, after they were reminded that Stradley was involved in the 2017 false arrest of Black Portlander Michael Fesser—who was understandably NOT happy that the disgraced former officer was given the job!

• Happy D.B. Cooper 50th Anniversary! Don’t miss this fun, interesting feature by Doug Kenck-Crispin on the 10 weirdest revelations from the FBI files on the only unsolved skyjacking case in American history!

• The Oregon Health Authority announced yesterday that Oregonians no longer have to wear masks outside in crowded settings, thanks to the progress MOST of us have made battling back COVID-19. GOOD WORK, (most of the) TEAM!

• While COVID-19 cases and hospitalizations have dropped a lot since September, insufficient staffing and long hours are significantly stressing the health care system in Oregon, and nurses are taking the brunt of it, in some cases working 12 hour days up to 21 days in a row.

• Breathe a sigh of relief: The three Georgia white men who murdered a Black jogger, Ahmaud Arbery, have been found GUILTY of pursuing and fatally shooting him, along with other charges including hate crimes and attempted kidnapping. They all face life imprisonment. (Note: It took 74 days following the murder for authorities to press any charges—and may have never happened without a national spotlight and outcry.)

But we should never forget that his killers almost escaped accountability because the first DA handling the case instructed police to not charge them. She is now under criminal indictment. https://t.co/RGB0kU71Pf

Coronavirus cases are once again rising in most of the U.S. after a steady decline since mid-September.

New cases have increased by 25% nationally in the past two weeks. Here’s a look at where they’ve risen the most. https://t.co/t33UygVBYg

• At least 31 migrants have perished after their boat crossing the English Channel from France to Britain capsized. Officials are still looking for survivors.

• The number of people applying for unemployment plummeted to the lowest levels since 1969 last week, indicating good news for an economy on the rebound.

• Today in SCIENCE!: NASA has launched a spacecraft designed to smash into (and hopefully deflect) an asteroid in a test to defend the earth from potential future asteroid collisions

.@NASA’s #DARTMission spacecraft blasted off on a @SpaceX-owned Falcon 9 rocket in a first test mission designed to deflect an asteroid from a potential doomsday collision with Earth https://t.co/VBkpe1BP5W pic.twitter.com/KtdDnwwD8T

• You want to find the perfect gift while also supporting local businesses, yes? YES! Then don’t miss the Mercury‘s Holiday Gift Guide, featuring only the coolest gifts and where to find them… locally!

• And now… THE WEATHER REPORT: Expect a dry Thanksgiving day and a rainy night with a high of 54.

• And finally, do not invite this parakeet to any of your holiday festivities.