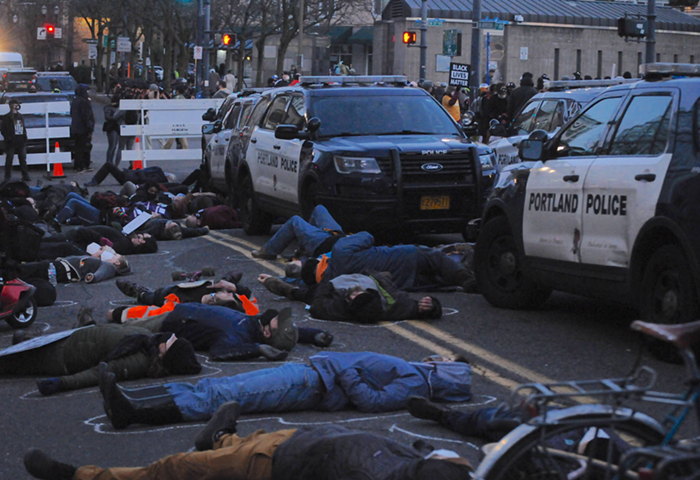 Portland protesters gathered on Sunday to stage a “die-in” for the victims of acquitted killer Kyle Rittenhouse. Jordan Brokaw

• Well, this is halfway surprising: Commissioners Mingus Mapps and Carmen Rubio have both given their endorsement to the re-election campaign of Commish Dan Ryan—despite the appearance of some very promising candidates to take him on. (I’ll let you guess why I’m calling this decision “halfway” surprising.) Our Alex Zielinski has more!

COVID-19 case numbers have been declining for weeks in Oregon, but state health officials say there’s still a long road ahead. From @AprilEhrlich https://t.co/wjEOSMfwVg

• A less publicized (and peaceful) response to the Kyle Rittenhouse verdict happened Sunday afternoon, when a few hundred protesters met up downtown outside the Portland Art Museum to march to Providence Park and stage a “die-in” to mourn Rittenhouse’s victims.

• Another crushing disappointment for lying Oregon Republicans: The Oregon Supreme Court has dismissed Republican claims that state Dems gerrymandered new legislative districts. The judges ruled that the GOP’s argument was “unpersuasive, largely because they rely on debatable and unsubstantiated assumptions.” WOMP WOMP.

• RIP Stu Rasmussin, the former mayor of Silverton, Oregon, and the first openly trans mayor in America. He was 73 years old.

• This Wednesday marks the 50th anniversary of skyjacker D.B. Cooper yoinking $200,000 and parachuting out of a plane somewhere over Washington state, before safely escaping (or dying… NO ONE KNOWS). Local historian Doug Kenck-Crispin has looked at 200,000+ pages (!!) of the FBI’s investigation, and has come up with his top ten list of the WEIRDEST things from the decades-long case.. and it’s very entertaining! Check it out!

• Today in “I bet People for Portland is somehow behind this bullshit”:

• Police are charging a Milwaukee man with five counts of murder, saying he intentionally drove his SUV into a Wisconsin Holiday Parade, killing at least five and injuring more than 40 (including 18 children). He was apparently driving away from the scene of a domestic disturbance.

NEW: The RNC is using party funds to pay Trump’s personal legal bills, as he faces investigations of his business practices in NY.https://t.co/BQYZ0iImot

• Attorneys have made their closing arguments in the murder trial of the Georgians who killed a Black man, Ahmaud Arbery, for the crime of “running.” The decision will now go to a disproportionately white jury… UNNNNGGGGGGHHH.

• Another one bites the dust: “Trump-backed Pa. Senate candidate suspends his campaign after losing custody battle.”

• You want to find the perfect gift while also supporting local businesses, yes? YES! Then don’t miss the Mercury‘s Holiday Gift Guide, featuring only the coolest gifts and where to find them… locally!

• And now… THE WEATHER REPORT: Possible showers and sunbreaks tomorrow with a high of 48.

• And finally… and I fear Tuesday won’t be much of an improvement.