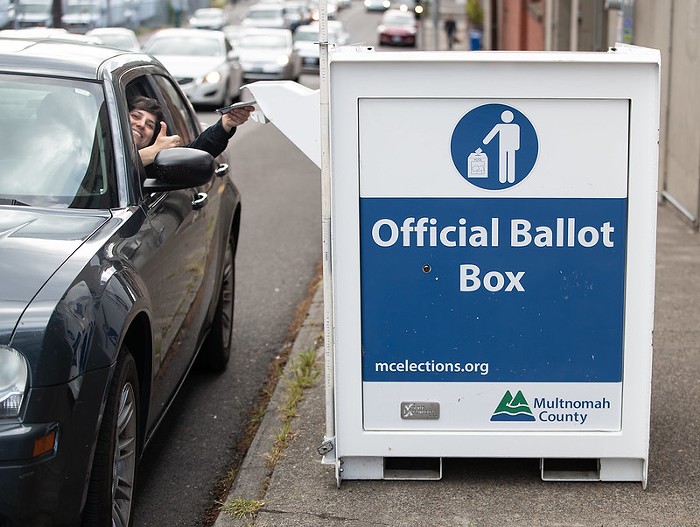 Today is the last day to register to vote in time for the November 2, 2021 Special Election. Motoya Nakamura / Multnomah County

• ALERT! Today is the last day to register to vote in time for the November 2, 2021 special election. Oregonians with a valid drivers license, driving permit, or ID can register online, or fill out a paper Oregon Voter Registration Card at a post office, county library, or the county elections building at SE Morrison and 11th.

• As the October 18th vaccination deadline for healthcare workers and emergency responders looms closer, at least eight counties in Oregon have already declared states of emergency in preparation for mass resignations. The predominantly Southern and Eastern Oregon county leaders have asked Governor Brown to remove or extend the vaccination mandate deadline, but Brown hasn’t budged—probably because we’re in this little thing called A PUBLIC HEALTH CRISIS.

Kicker rebate finalized: Oregonians will get 17% of their 2020 state income taxes back https://t.co/BNjRBhnbwg pic.twitter.com/kf5j4M1P6Q
— The Oregonian (@Oregonian) October 12, 2021

• Residents at Rosemont Court, an affordable housing complex for seniors in North Portland, have been facing an outbreak of Legionnaires’ Disease—an illness spread by bacteria in water droplets—since January 2021. With the housing complex unable to identify the source of the outbreak, some residents are trying to escape the public health crisis by moving out, only to find they can’t afford to live anywhere else.

It took more 19 months, but you can finally reach the Oregon Employment Department by phone https://t.co/7jitafQdqM
— KGW News (@KGWNews) October 12, 2021

• Facing a steep increase in electric bike theft in 2020, groups of bike delivery workers in New York City for services like Door Dash are banning together to keep each other safe using location sharing apps and neighborhood patrols. The peer groups are especially popular among undocumented delivery workers who don’t feel safe reporting attacks and stolen property to the police because of their immigration status.

• While food insecurity is slowly decreasing from the height of the pandemic, the amount of food being distributed by food banks across the nation is still 55 percent higher than pre-pandemic levels. “There are people going back to work, but it’s slow going and God forbid you should need a car repair or something,” said the president of an Indiana food bank.

Republican governors in Texas and elsewhere are moving to block President Biden’s COVID-19 vaccine mandates for private employers before the regulations are even issued. The issue will likely end up in the courts, which have long upheld vaccine mandates.https://t.co/f0T7pa1Fb3
— The Associated Press (@AP) October 12, 2021

• With more moderate US House Democrats blocking the passage of the $3.5 trillion social spending package, House Speaker Nancy Pelosi is proposing shortening the timelines of several major programs in the package to lower the price tag. On Tuesday, Pelosi said the smaller bill would still address the three major pillars of the Biden administration’s “Build Back Better” agenda—climate change, health care, and jobs—but while reducing the total spending to $2 trillion.

• And in closing, I’m sending all my love to Mary-Kate and Ashley, the two-headed baby turtle. You go, girls!

A rare two-headed turtle is being cared for by the veterinary staff at New England Wildlife Centers.

The diamondback terrapin hatchling has two heads and three legs on each side.https://t.co/oK0Orz2roF
— The Boston Globe (@BostonGlobe) October 12, 2021