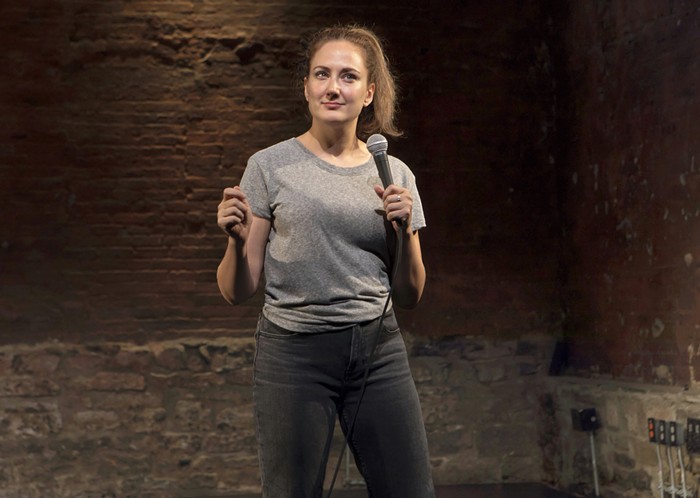 It’s not really about blowjobs—or at least, not exclusively. Rather, GOYK, which you can see this Sunday evening at Revolution Hall, uses the blow job as “this recurring thing I revisit to talk about a lot of other things,” Novak says in a recent interview with the Mercury, which is peppered with the mile-a-minute commentary and generous, honest humor fans of Novak would recognize.

Novak first opened GOYK in 2019 in New York City, to rave reviews from the likes of the New York Times and The New Yorker. She was set to start touring in March 2020, and was delayed for obvious reasons. Now, she’s been on the road for a month, but says keeping the show fresh has come easily.

“My emotions and thoughts around it are changing all the time, because I’m always looking for ways it can be improved. My inherent self-dissatisfaction keeps it fresh for me,” she says. “It’s like it’s never done…. Plus, every time I go in front of an audience, it is inherently scary.”

“I’m certainly feeling a giddiness, or a thrill, so hopefully that has a contagion,” she adds. “Oh—wrong word, wrong word. Or maybe it’s funny, I don’t know. Probably not.”

When planning her Pacific Northwest tour leg (she hits Seattle first on Saturday), Novak had grand plans of turning the trip into a vacation. “I was wildly looking this week at these lodges—these Pacific Northwest getaways. ‘I’m gonna go a week early, I’m gonna go to this lodge, ride a horse.’ I had ten of these woodsy spa resorts, and then I didn’t get my shit together, so that’s not happening.”

Still, at every tour date, Novak looks forward to the moment after the show, when she can return to her hotel room and eat nachos.

“It’s the best experience of food in the world, doing a post-show meal. It’s just the utter sensation of relaxing,” she says. “God’s greatest gift: room service. The one true glory of God is room service, and everything about it.”

You can see Jacqueline Novak’s one-woman show, Get on Your Knees, at 8 pm Sunday, October 10 at Revolution Hall. Tickets are $35. Proof of COVID-19 vaccination or a negative test is required for entry.