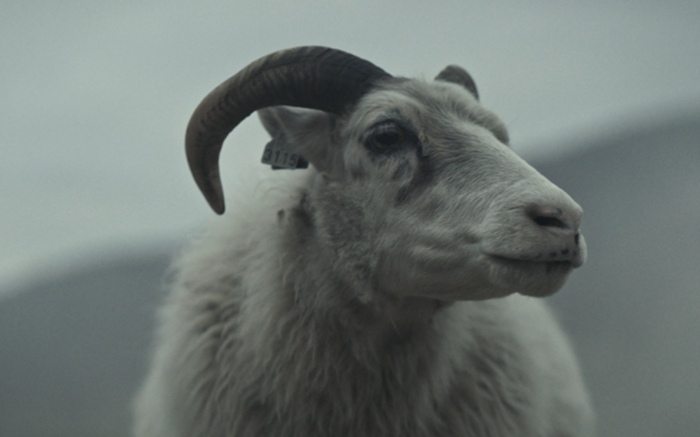 A patient slow burn of a film built around a haunting atmosphere, Lamb is an exploration of deep loss that plays out as a horrifying yet darkly comedic fable. More closely resembling a fairytale in style and execution, it is all about the desperate lengths one couple will go to ease the pain of losing all they hold dear. Defying easy categorization, Lamb lives in the horror genre while still creating its own rules. It owns its strangeness, only briefly pulling the wool over your eyes beforing diving in.

Set in rural Iceland—a remote location defined by its vast beauty, which comes with the tradeoff of a steadily crushing isolation—the film follows farming couple María (Noomi Rapace) and Ingvar (Hilmir Snær Guðnason) as they struggle to mourn the recent loss of their child. They spend their days going about the duties of taking care of the farm and their flock of sheep, almost barely talking to each other even as they are the only ones here. They remain together, though without passion for living.

Each new day doesn’t bring any relief or joy, providing only an increased numbness for the couple as they remain both trapped and comforted by the repetition of routine. Whether intentionally or not, they have settled into a quiet acceptance of the pain of their grief without any hope for their future. It is starkly bleak, stripped of any pretense or delusion about life getting better.

That is, until the couple discovers something that will forever alter the course of their quiet lives and set them on a path towards destruction. An unexpected gift—or potential curse—will offer them a fraught salvation. It brings both literal and metaphorical new life to the farm, giving the couple a renewed sense of purpose. The transformation in the way they carry themselves is subtle, as they still remain fearful of losing what they have been given, though it begins to bring a sense of joy and happiness to a home that hasn’t seen it in a long time. Finally, there may be something resembling a good life for them peaking over the horizon. 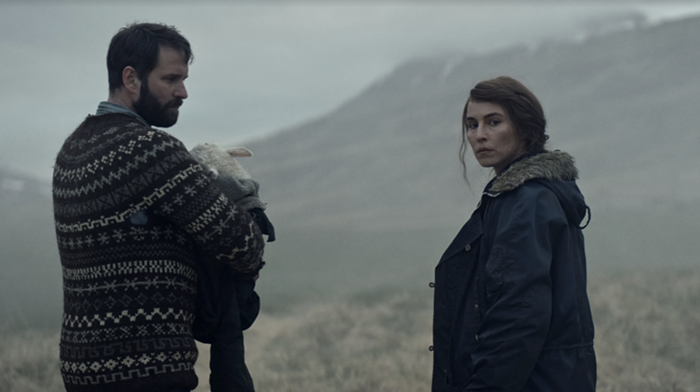 However, there is a force lurking around their farm that was the cause of the gift. The couple remains blind to it, but as an audience we both hear it creeping around and see the mark it leaves upon the isolated farm. Meanwhile, the oblivious couple fully accepts their gift and makes it a core part of their identity so completely that they will risk everything to protect it. In particular, María becomes so entirely drawn to this chance at a new life that she commits a violent act in order to protect it. It is this that marks the beginning of the steady descent into tragedy that threatens to consume the couple and all they know.

Any further details of Lamb are best left as unknown as possible, to preserve what is an audacious film that still remains humble in its construction. When the film fully lays all its cards on the table about the gift, it may be a lot to swallow at first. However, writer-director Valdimar Jóhannsson has both the confidence and commitment to make it all work. In his feature debut, he takes what could easily be dismissed as an absurd idea and gradually pushes it deeper into your mind until it draws you completely into its world. Split into chapters, the film is expertly paced and shot with a sharp eye for instilling artistry into every frame.

It is important to note, there is still a high degree of absurdity that is baked into the film. What ensures Lamb does not lose its grounded sense of direction is in how it approaches the material: with a knowing wink on a deadly straight face. The story will let out some of the comedic tension ever so slightly before further delving deeper into what it actually cares about. In particular, there is one moment where the characters are watching some sort of sporting event on a television that we don’t see. They are doing so with such a rapt attention that it gives the impression that it’s the most exciting of all events possible. The reveal of what it actually is elicits an earned chuckle, part of a delicate balance of humor.

The tragedy comes from all the events around the humor. The film builds complete compassion for María and Ingvar, whose response to the absurdity of their situation is precisely the point. Even as an outsider may consider their embracing of this strange gift incomprehensible, the fact that they are doing so as a way to heal only makes it all the more painful. The well-timed introduction of such an outsider brings this all into focus.

Amidst all those complications, the cast navigates the fraught situation they find themselves in with a delicate precision. In particular, Noomi Rapace as María gives the most standout performance even as it is often the most reserved. The way her character grows from being still broken by the loss of her child into then being the one who first latches onto the newfound hope is devastating. When she commits a shocking and brutal act in order to cling to that hope, the film does not look away from the cold nature in which she carries it all out. Amidst it all, Rapace expertly crafts a morally complex character that is so consumed by her grief that it has shifted into desperation that drives her to the edge. It will soon all catch up to her.

When that moment of reckoning comes in the film’s conclusion, it doesn’t hold back in laying it all out in the open. Without saying any details, it is a both cathartic and terrifying moment that rams home the overarching moral of the dark folklore. A dash of ambiguity and the sudden nature in which it concludes may prove to be unsatisfying for some. It is without a doubt a hopeless path that the film ends up going down, though it is shot with a terrifying grace and beauty. Lamb creates an authentic, inescapable sadness that echoes that of true loss.

You can see Lamb in theaters starting October 8.