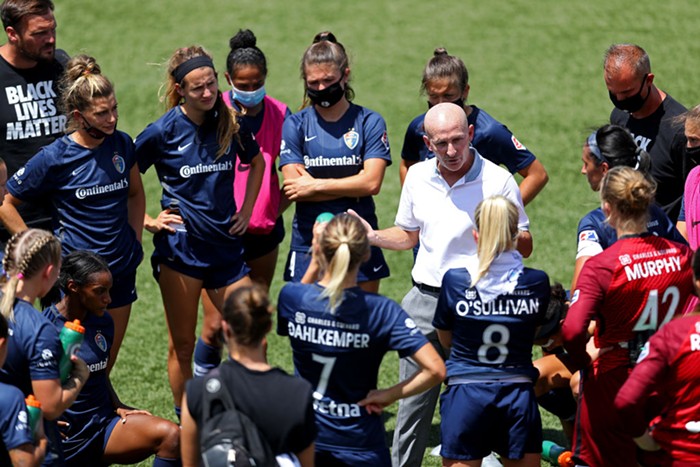 The National Women’s Soccer League (NWSL) is reeling from one of the biggest scandals to hit women’s soccer in the United States in years—and the Portland Thorns are right in the middle of it.

On Thursday, The Athletic’s Meg Linehan reported that North Carolina Courage manager Paul Riley had for years harassed, intimidated, and sexually coerced players, including while he managed the Thorns in 2014 and 2015.

Two of the dozen players who shared their experiences with The Athletic were former Thorns midfielders Sinead Farrelly and Mana Shim. Both described a range of abusive behavior by Riley. Farrelly said that she was, on multiple occasions, coerced into having sex with him.

The Courage fired Riley after the story was published on Thursday afternoon and US Soccer has suspended his coaching license. NWSL Commissioner Lisa Baird said that she was “shocked” by the allegations against Riley, even though multiple players say they contacted Baird regarding the allegations earlier this year after the league implemented a new anti-harassment policy and she had declined to act.

NWSL games this weekend have been cancelled.

Riley spent the last decade as one of American women’s club soccer’s most decorated figures: a three-time NWSL champion and two-time Coach of the Year who had spent the last 15 years managing six teams across two top-flight leagues.

Riley’s long career now stands as a monument to the NWSL’s flagrant disregard for player safety. Despite ample evidence that the Thorns and the league itself were aware of the nature and seriousness of the allegations against Riley, the manager was allowed to continue to occupy positions of power year after year.

The Thorns, namely owner Merritt Paulson and general manager Gavin Wilkinson, continue to have plenty to answer for regarding why Riley’s tenure in Portland ended and what steps the Thorns took to make his future employers aware of his behavior while with the club.

According to The Athletic, following the 2015 season, Shim sent a complaint regarding Riley’s conduct to Paulson, Wilkinson, Riley, and Thorns HR director Nancy Garcia Ford. She also forwarded the email to then-NWSL Commissioner Jeff Plush.

The Thorns investigated the complaint and found that while the investigation did not find any “unlawful activity,” it did “uncover clear violations of our company policies.” A week later, the club announced that Riley, his contract expiring, would not return to coach the Thorns the following season.

The Thorns management declined to respond to the Mercury’s questions for this story.

In The Athletic article, Thorns owner Paulson was paraphrased as stating that the results of the investigation into Riley’s conduct “factored into the decision to let Riley go.”

In their statement released Thursday afternoon, however, the Thorns wrote that they placed Riley on administrative leave immediately after receiving a complaint about his behavior and that the club “chose to sever ties” with him based on “clear violations of our company policies.”

In a brief press release announcing Riley’s departure on September 23, 2015, Wilkinson said, “on behalf of Thorns FC, I would like to thank Paul for his services to the club these past two seasons.”

Paulson was not quoted. Nowhere did any public statement by the club mention that Riley was not retained for violating company policies. The Thorns’ season had ended in disappointment just three weeks previously on September 4; 2015 remains the only year in which the club did not qualify for the NWSL playoffs.

Even before Shim’s complaint, Riley’s future with the club had already been in doubt. The Oregonian reported in a story about Riley’s future days after the Thorns’ 2015 season ended that, “Wilkinson said that the organization expects the Thorns to be a perennial playoff team that challenges for the title year after year and the club has not met those expectations under Riley.”

Riley, in a statement to The Athletic, wrote that “I was interviewed and cleared by the team after an investigation. My contract was not renewed because our results were not very good and I was interested in returning to the East Coast for a host of different reasons, including marriage and businesses.”

Riley was not out of work for long. On February 19, 2016, he was hired by the Western New York Flash, whose Vice President Aaran Lines said, “we couldn’t be happier to have Paul. He is an excellent coach and very well respected across the globe.”

Lines himself has long-standing connections to Portland. He played for the Portland Timbers in 2005, where Wilkinson was both a teammate and an assistant coach. Lines said that the Flash was aware of an internal investigation into Riley at the time they hired him and that the hiring was approved in conjunction with the league office.

When the Flash moved to North Carolina and became the Courage after the 2016 season, Riley moved with them. All the while, Paulson continued to cheerfully tweet at and compliment Riley, including as recently as 2020.

The Athletic’s reporting included an account from Shim, corroborated by her partner and former Thorns forward Alex Morgan, that Wilkinson called her into his office before the 2014 season to ask her to stop speaking publicly about non-soccer matters.

Shim had publicly come out as LGBTQ+ the day before the Thorns won the inaugural NWSL championship in 2013 and, despite her outstanding play that season, had been left off of a list of players protected by the Thorns from selection in the following year’s expansion draft.

Wilkinson called Shim’s account “bullshit” in The Athletic article, but Wilkinson softened his response in a follow-up statement on Thursday, writing that while he has “always intended to encourage players to speak freely on all matters,” he “clearly said something to Mana [Shim] in 2015 that made her feel differently.”

“I fully own that and do not question Mana’s feelings surrounding our conversation,” Wilkinson said. “On my end this is an opportunity to re-focus on how I communicate.”

Shim’s account is particularly troubling for a club that touts its “long-standing ethos of social justice and inclusion, and of player and employee advocacy,” but clashed repeatedly with Thorns and Timbers supporters just two years ago over the use of antifascist imagery at Providence Park.

In a statement, the Thorns supporters group the Rose City Riveters said that they were “furious” with the club’s conduct and endorsed NWSL Players Association demands that the league open a new, independent investigation into Riley, that personnel accused of violating the league’s anti-harassment policy be suspended pending investigation, and that the league disclose how Riley was rehired within the league after the Thorns’ initial investigation.

But Riley, as the players and supporters of the league are well aware, was not a lone bad actor. This year alone, the NWSL has been plagued by numerous allegations of misconduct by men in positions of authority and the decisions of other men to cover for them.

The future of the league may depend on its willingness to change that. The Thorns’ future does too.

“We want to support the best club in the world,” the Riveters wrote in their statement. “Today’s reporting brings to light that there is a long way to go before we can make that claim.”