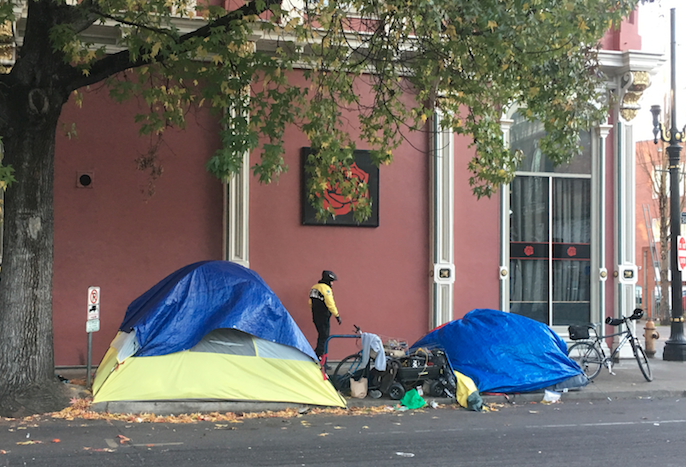 The fate of downtown Portland has remained a common source of hand-wringing in City Hall after the economic toll of COVID-19 slowed downtown pedestrian traffic, shuttered businesses, stalled tourism, and increased the number of unhoused Portlanders on downtown streets.

On Thursday, City Council will vote on a contract that will shape the future of Portland’s downtown as it reemerges from the pandemic. The vote will renew and tweak a contract the city currently holds with Downtown Clean & Safe, an organization that charges property owners located within its 213-block boundary to fund additional, or “enhanced,” services not already provided by the city—like graffiti removal, expanded trash pick-up, and augmented police and security patrols. Clean & Safe is a subcontractor of Portland Business Alliance (PBA), with many of its staff on the business lobbyist group’s payroll.

Clean & Safe is one of the city’s three Enhanced Service Districts—or ESDs—that oversee how property owners’ fees are distributed to support a certain business district. In each contract it holds with an ESD, the city plays the role of the fee collector—ferrying money from property owners to Clean & Safe.

The proposed contract (link to PDF) is being introduced on Thursday by Mayor Ted Wheeler and Comissioner Mingus Mapps, and allegedly has the support of the “majority of the City Council.” It’s not clear if Comissioner Jo Ann Hardesty, whose office has pushed for transparency in the contract’s development, is part of that majority.

The $25 million, 5-year contract attempts to address concerns long raised by homeless advocates, law enforcement critics, and business owners—concerns that were also outlined in a 2020 audit by the city. Yet the proposed contract falls short of overhauling critics’ top issues with the program.

“Overall, this contract does very little to change the status quo,” reads a letter to Portland City Council written by a group dubbed the End Clean & Safe Coalition, which includes homeless advocacy groups Stop the Sweeps, Western Regional Advocacy Project, ACLU of Oregon, and Sisters of the Road. “Renewing this contract for another five years is too long. We need radical change now.”

Members of the coalition have long condemned Clean & Safe’s security guard programs for focusing its efforts on removing unhoused people from public sidewalks. The new contract tries to lessen the impact of these teams by limiting the number of security on shift at any given time to 15 and only allowing 25 percent of security on shift to carry a gun.

Clean & Safe has not publicized how many security guards currently work a Clean & Safe shift, let alone how many of them are armed.

Another change to the contract: A plan to create a three-person “community health outreach team,” that includes a licensed mental health clinician, to meet with homeless people in the district and potentially connect them with requested social services. The program appears to mimic the work of the city’s navigation team, which works under the Homelessness and Urban Camping Impact Reduction Program (HUCIRP) to link unhoused Portlanders up with services. Under the terms of the contract, this team would occasionally partner with PPB when it feels unsafe.

This proposal does little to resolve advocates’ concerns.

“This program is not what the community asked for,” writes End Clean & Safe Coalition. “It is an expansion of privatized public space services. We do not want to see more privatization of services that should be public in the first place.”

Anita Davidson, a resident of a downtown condo building within the Clean & Safe district, said she doesn’t see how a group like Clean & Safe has any expertise in mental health intervention.

“It sounds like they just want a reason to increase their staff,” said Davidson. “Taxpayers already pay the county to provide mental health services. It should be a public service—not private one.”

Condo owners like Davidson have been required to pay Clean & Safe’s annual fees since 2009. For Davidson, that comes in at about $300 per year. It’s a mandate that she and other condo residents take issue with. In a letter to City Council, Davidson and seven other condo owners write that the services promised to those who pay ESD fees do not feel “enhanced,” and does little to replace the basic services that taxpayers should expect from a government entity.

Davidson told the Mercury that she only sees expanded police and security patrols (funded by Clean & Safe) in Portland’s Old Town—the area of the Clean & Safe district with the largest homeless population. Davidson said she’s also uncomfortable being forced to pay fees that bankroll a political lobbying organization like the PBA.

This requirement, the condo owners’ letter reads, “obligates homeowners to support political positions with which they may or may not agree.”

It’s not just private property owners whose fees are funding PBA. Because the City of Portland owns property within the Clean & Safe district, city bureaus are also required to pay the Clean & Safe fees. In 2020, the city paid out more than $575,000 in fees to Clean & Safe.

“The public should know that this is not just a fee for [property owners] in the district,” Davidson said. “This is taxpayers funding a political lobbying entity.”

Business for a Better Portland, another local lobbying organization, echoed Davidson in a separate letter to City Council.

“This substantial public investment deserves thorough scrutiny,” writes Ashley Henry, director of Business for a Better Portland. Henry points to the August 2020 ESD audit by the Portland Auditor’s Office, which noted that “problems arise when security, enforcement, and management of public spaces are decided by one paying sector of the community without the city’s oversight and public input.”

The city was due to respond to the audit’s findings and recommendations by August 2021. It has yet to produce that response. The proposed contract directs Clean & Safe to participate in the city’s coming process to evaluate ESDs as a result of the audit.

Henry, Davidson, and others believe the community impacted by Clean & Safe’s work deserves more time to influence the future of the ESD program. The city’s Office of Management and Finance (OMF), which oversees the city’s partnership with ESDs, held a few listening sessions for members of the public to comment on Clean & Safe’s contract over the summer. Davidson described them as “venting sessions.”

“It wasn’t a two-way conversation, we didn’t get any of our questions answered or acknowledged,” said Davidson, who attended several of the sessions. “It was really lopsided. That power dynamic… it’s now reflected in this contract.”

Davidson wants to see a pause on the contract renewal until the city genuinely invests time in evaluating the concerns with ESDs raised by members of the public and in the city audit. At the least, she’d like to see the contract given just a one year renewal, with a chance to reconsider the system in a year. Under the current proposed contract, City Council won’t reconsider the Clean & Safe contract until 2026.

In a press statement, Wheeler suggested that the contract might be tweaked before that point. But he made no guarantees.

“This new contract provides flexibility to implement further reforms that may surface from ongoing conversations regarding the role and structure of enhanced service districts in Portland,” said Wheeler. “Finding the balance between pushing forward improvements and maintaining needed services is the great challenge of responsible governance. This contract achieves that balance.”

Henry points to the success of another Portland ESD, the Central Eastside Industrial District, which saw a community-driven overhaul of its programming—including its security services—in 2019.

“Deep civic engagement during that formation process—however challenging for its creators at the time—resulted in the creation of a model that you as a council should consider as you move forward with a new [Clean & Safe] contract,” Henry writes.

City commissioners will vote on the proposed contract at a 2 pm virtual City Council meeting Thursday.

“We are once again urging you to push pause on this contract renewal, and spend time actively engaging with unhoused community members who are most impacted by these services,” reads the coalition’s letter to council. “Until then, we will continue fighting this contract and the undue influence Portland Business Alliance has over our city.”