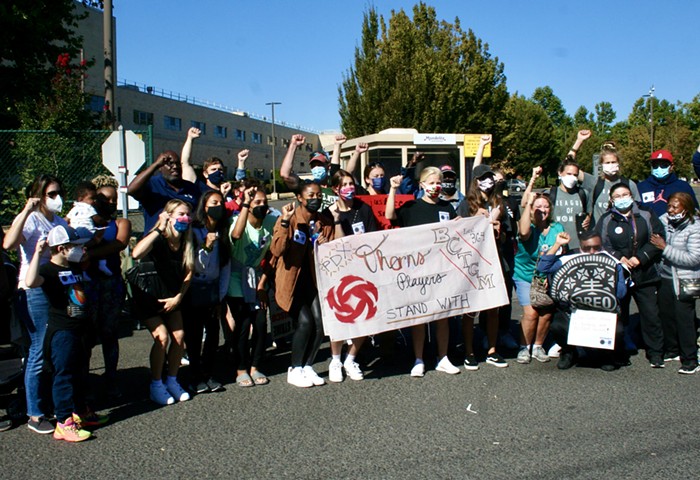 • The Nabisco worker strike is still going strong after one month, inspiring the company’s hired security officers to ramp up their aggression against striking workers. Abe Asher has a look at the frontline aggression and status of the strike.

• Aaaaand the race is on: Housing advocate Shannon Singleton is the latest candidate to join the race for Multnomah County Chair, currently held by Deborah Kafoury who will vacate the seat next year due to term limits. Current county commissioners Jessica Vega Pederson and Sharon Meieran have also announced they’re running for the position.

• From the Mercury’s Fall 2021 Arts Guide: For writer-director Michael Sarnoski, making Pig was a tale of big risks to tell humble story. From filming on city’s fringes of wilderness to delivering “fuck Seattle” quips, Chase Hutchinson has the scoop on how Portland played a central role in the film.

• Today is the last day for Californians to vote in the state’s governor recall election. So far, 8 million of the state’s 22 million voters have returned mail-in ballots, which ask residents whether or not they think Governor Gavin Newsom should be recalled and, if yes, which of the 46 candidates should replace him. Here’s an explainer on the process and why people around the country are watching the election with bated breath.

• A Harvard genetics professor has secured $15 million in funding to “genetically resurrect” woolly mammoths using recovered DNA. How many Jurassic Park movies need to be made before people learn to leave dinosaurs alone?!?!?

A ban on cannabis kept Sha’Carri Richardson out of the Olympics. The world’s top anti-doping authority is rethinking that rule. https://t.co/kZHzr88leD
— The Wall Street Journal (@WSJ) September 14, 2021

• A cave containing the largest collection of indigenous people’s cave paintings in Missouri was auctioned off for $2.2 million Tuesday, disappointing leaders of the Osage Nation who wished to buy the land and protect the sacred site. “It’s like auctioning off the Sistine Chapel,” said an Osage scholar.

• Apple launched its first software update to boost security against zero-click hacks—malicious software that hackers can use to infect devices without any user action, like clicking on a link to trigger downloading a virus. The tech giant made the security update after a Saudi activist’s iPhone was hacked by zero-click software. It’s the first time a zero-click exploit has been caught and analyzed.

• And finally, this song has been stuck in my head all day, so I’m ending my work day by listening to it on full volume. Feel free to join: