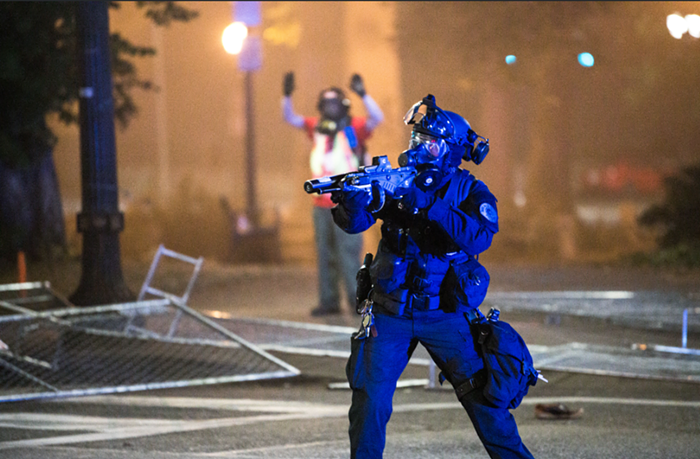 Portland has not done enough to keep its citizens safe from police violence—until then, the city will keep paying. Mathieu Lewis-Rolland

• Last week, Portland City Council voted to pay Michelle Fawcett $50,000 to settle a lawsuit she filed against the city in 2019, after Portland Police blindly shot a munition into a crowd of protesters, hitting Fawcett and leaving her with searing third-degree chemical burns on her arm and chest. Our Alex Zielinski digs deep into the story in her latest (and excellent!) Hall Monitor column.

“The city has done nothing to make us feel like we can practice democracy safely.”

• Portland Police have identified two of their officers, Ivan Alvarez and Jonah Gellman, who fired their weapons and injured Andreas Boinay early Sunday morning, after following a tip that Boinay had allegedly stolen a truck. And other than that… we know practically nothing about the incident, because that’s how the cops in this town operate. Accountability is overrated, I guess! (Alex Zielinski has more on the story.)

• Oregon has passed the 300,000 mark of confirmed and presumed COVID-19 cases. The quote: “This grim trend follows several weeks of record, or near record, daily cases and hospitalizations,” Oregon Health Authority Director Patrick Allen said on Wednesday. “Oregonians should be prepared to see this tragic toll escalate dramatically in coming days and weeks.”

• President Biden visited the Pacific Northwest today, speaking in Boise on the need for America to back his $3.5 trillion spending plan, pointing specifically at the many wildfires which have rampaged through this part of the country, how climate change has gotten us here, and what his plan can do to lessen its future effects.

• Woot! Woot! The Mercury’s 2021 Fall Arts Guide has arrived bearing the theme “Art Is Political!” Inside you’ll find lots of articles about how local artists, performers, comedians, and more have embraced and included politics in their art, as well as a preview of the upcoming Time Based Arts festival, a sneaky peek at all the must-see art events of the fall, and more! DO NOT MISS IT.

“It’s not unprecedented that businesses are involved in politics, they’re just usually involved on the side of people like Ted Wheeler.”https://t.co/mmh1mEpSPq
— Portland Mercury 🗞 (@portlandmercury) September 13, 2021

• According to a lot of top-notch scientists worldwide as well as US regulators, the average person does not need a COVID-19 vaccine booster shot… yet. They say the shots we have are working well enough against the highly transmissible Delta variant, and that it is the (surprise!) unvaccinated who are driving the current surge.

In Idaho, where the governor has refused to require masks or vaccines, more Covid patients are being sent across the border to Washington State, where struggling hospitals have already had to delay procedures. https://t.co/lyDiBBdFkJ
— The New York Times (@nytimes) September 13, 2021

• Tropical Storm Nicholas is bearing down on the Gulf Coast, and (thanks, climate change) could dump as much as 20 inches of rain, causing flash floods throughout the region.

• Secretary of State Antony Blinken answered questions from Congress today about the Biden Administration’s admittedly messy exit from Afghanistan, which gave Republicans a chance to lie, bloviate, and grandstand—though the alternative idea of sending in more American troops to continue the 20 year war shut them up real quick.

• Not enough, but it’s something: A Texas judge has issued an injunction against the anti-abortion group, Texas Right to Life, that will stop them from filing lawsuits against Planned Parenthood for any potential violation of the state’s new, overreaching anti-abortion law. The injunction only applies to this particular group, not private citizens, but still… it’s something.

Abortion providers told the Supreme Court on Monday that approving a Mississippi law that bans most abortions after 15 weeks would “scuttle a half-century of precedent and invite states to ban abortion entirely.” https://t.co/iUOWFvn0Y7
— The Washington Post (@washingtonpost) September 13, 2021

• GUYS. Right-wing, abortion-hating, and Trump-picked Supreme Court Justice Amy Coney Barrett is getting increasingly concerned that a lot of you think the Court is now a “partisan institution.” I mean, WHERE IN THE WORLD WOULD YOU GET SUCH AN IDEA?

• An Alabama man died of a heart attack, because his local hospital was unable to find an ICU bed in a three-state radius, since all of them were filled up with COVID patients.

Oscar-winning actor Jeff Bridges says his lymphoma is in remission, and he is feeling better after battling Covid-19, which made “cancer look like a piece of cake.” https://t.co/X5RpSHjO3T
— NBC News (@NBCNews) September 13, 2021

• And now… THE WEATHER REPORT: A cooler cloudy day tomorrow with a high of 75.

• And finally, if you’re looking to hear opinions about abortion from a Christian erotica professor… well, here’s the hilarious Blaire Erskine.