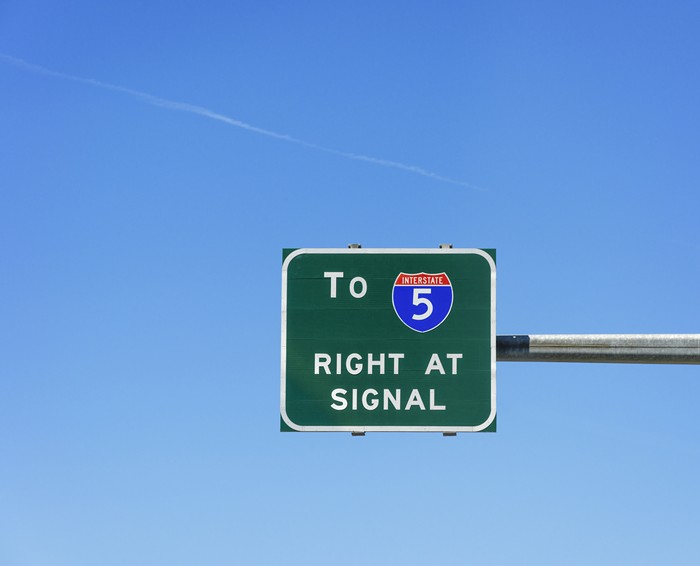 After years of back and forth debate over design, intent, and scope of Portland’s Interstate 5 expansion project in the Rose Quarter, an impactful state transportation committee wants to know: Who’s paying for it?

On Thursday, commissioners on the Oregon Transportation Commission (OTC)—the governing body of Oregon Department of Transportation (ODOT)—gave conditional approval to a design for a freeway cover included in the I-5 expansion plan. The approved cover design, called “Hybrid 3,” is a continuous cover that will dome over the freeway just north of the Rose Quarter, reconnecting the street grid above the thoroughfare and add 4 acres of land to the Albina neighborhood—the historically Black neighborhood that was bulldozed and bisected by the original construction of the I-5 corridor in the early 1960s. The land on top of the cover is intended to return land taken away from the neighborhood by the freeway.

But the proposed design comes with a big price tag, raising the project’s estimated maximum costs from $795 million to $1.25 billion.

There’s no clear funding source. The Oregon Legislature has committed $30 million per year for the project starting in 2022 and ODOT plans to introduce tolling on the freeway that would help pay for the construction costs, but no other agencies have offered to foot the bill. 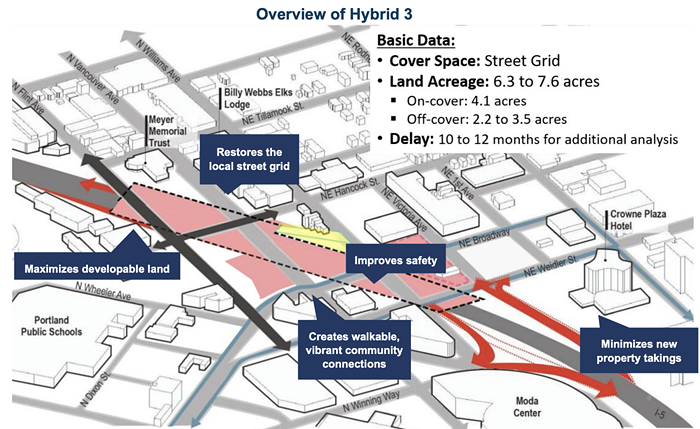 “It’s great that we’re going to do restorative justice to this community and I get the whole idea behind the cover,” said OTC Commissioner Julie Brown. “With that said, it’s now probably one of the biggest costs of a transportation project in the history of Oregon and I would be remiss if I didn’t put the brakes on a little bit and push back and say, ‘This is great, but we need to find a way to pay for this.’”

That’s why the OTC approved the Hybrid 3 cover design with a condition: ODOT must make a plan to pay for the cover by the end of the year. The conditional approval gives ODOT until December 2021 to develop a funding plan that will further specify the project costs and detail potential funding streams. The “conditional” vote gives the commissioners the right to rescind their approval of the freeway cover design if they aren’t satisfied with ODOT’s funding plan.

In addition to securing funding from federal infrastructure programs, the commissioners believe the City of Portland, Metro, Multnomah County, and TriMet have a responsibility to contribute to the project, implying that if local governments and agencies are unwilling to contribute to the costs, then they don’t actually believe in restorative justice for the Albina community.

OTC Commissioner Sharon Smith also questioned whether the Albina community believes the cost of the cover is worth the benefit.

“I don’t presume to tell the [Albina] community what they should want, but does it make sense for ODOT—and the rest of the jurisdictions because we can’t do it by ourselves—to spend $400 million to $500 million for 1.73 acres of a highway cap?” Smith said, referencing the acreage increase between the original cover designs that couldn’t support buildings and the Hybrid 3 design. “Could we spend that kind of money on other things and do more for the community?”

Albina Vision Trust (AVT), an organization advocating for the revitalization of the Albina neighborhood, has long fought for the inclusion of highway covers in the I-5 project. ODOT had planned to include highway covers in the project since at least 2012—before restorative justice was included in the project goals. AVT saw an opportunity to expand and use the highway covers to return land to the neighborhood and partnered with ODOT in 2019 to advocate for covers strong enough to support a city block over the freeway. When ODOT debuted a design with two overpass-like covers that couldn’t support any buildings in early 2020, AVT ended its partnership with ODOT.

Yet AVT has expressed its support in the Hybrid 3 cover design.

“Now we can move forward with a project that will provide good jobs, create community wealth building opportunities and repair the urban fabric in the heart of the city,” said AVT Director Winta Yohannes after Gov. Kate Brown endorsed the Hybrid 3 design in August.

It’s unclear how the project would be impacted if the OTC chose to rescind its approval of the cover design after reviewing the funding plan. AVT declined to comment on the OTC’s cover decision Friday.

Metro President Lynn Peterson is disappointed with the OTC’s decision, according to Metro spokesperson Nick Christensen.

“Really, this is a state responsibility to mitigate the harms that have been caused by the construction of I-5 through the Albina neighborhood,” Christensen said. “Lynn thinks that Metro should play a role in that, but the primary funding has got to come from the state and federal government.”

Christensen said the OTC is aware of the limited financial resources Metro and the City of Portland have in comparison to major transportation projects like the Rose Quarter project.

“It raises the question: Where do they think those resources should come from?” Christensen said.

Mayor Ted Wheeler declined to comment on the OTC’s decision Friday. Multnomah County did not respond to the Mercury’s requests for comment. A TriMet spokesperson confirmed the agency has not dedicated funding to the I-5 project, but did not comment on the OTC’s conditions.

The OTC will hold a meeting in December or January to review ODOT’s funding plan and determine the viability of the Hybrid 3 cover design.