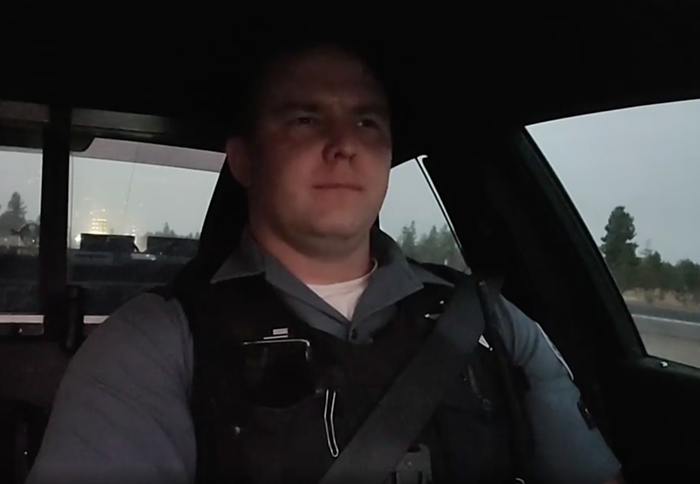 GOOD MORNING, PORTLAND! Just remember how he would tell you lies and then pretend that everything is so sweet? Why should you sacrifice if you’re not satisfied? He’s just a canine running ’round in heat. LET’S GO TO PRESS.

She chose to leave after a week on the job because the “highly charged political environment surrounding City Hall went beyond expectations.”https://t.co/dR2MtSNiFz

• It’s Labor Day weekend and Oregon coastal communities (and particularly hospital workers) are rightly petrified about the crowds that will be flocking to the beach over the next three days, potentially making an already deadly COVID situation exponentially worse.

• An Oregon state trooper/drama mama has been put on paid leave after posting a video stating he’s going to proudly and selfishly defy Gov. Kate Brown’s vaccine mandate, while also questioning anyone who is following the orders. A true “public servant,” indeed.

• Related: Pediatricians in Oregon’s Rogue Valley are starting to see the uptick in COVID cases among children, and with school starting back up, they fear that number is going to exponentially increase. (Good thing we have state troopers setting such a great example.)

The Newburg School District’s controversial ban on “political” symbols remains in place and continues to be the center of discussion among school board members. https://t.co/1F4wUFbEnJ

• Have you been hearing about the redistricting battle going on in Oregon which could change the face of state AND national politics? A bit confused by it all? Then don’t miss this great explainer from Abe Asher who breaks it all down in a simple and very interesting way!

• The 2022 race is already heating up, and yesterday Multnomah County Commissioner Jessica Vega Pederson announced she will be running for the MultCo chair position next year, which will be vacated by Deborah Kafoury due to term limitations. Find out more about Pederson in this report from our Alex Zielinski.

• Thanks to the Delta variant sweeping the nation, the economy is stumbling again after two strong months of gains, with only 235,000 new jobs added. Economists were hoping for numbers closer to 700,000.

• A state of emergency in New York and New Jersey has been declared by President Joe Biden following the massive floods and destruction caused by the remnants of Hurricane Ida, which has so far killed 49 people.

• President Biden didn’t mince words yesterday when blasting the Supreme Court for refusing to block the new Texas abortion ban that outlaws an estimated 80-90 percent of women in the state seeking the medical procedure. He vowed an all-out federal government push “to ensure that women in Texas have access to safe and legal abortions as protected by Roe.”

BREAKING NEWS: The Senate Judiciary Committee will hold a hearing examining the Texas abortion ban and the Supreme Court’s abuse of its “shadow-docket.”

• Afghan women are beginning to gather and protest in Kabul, demanding to keep the rights that will most likely be taken away by their new Taliban rulers.

• A Georgia ex-prosecutor has been indicted for allegedly protecting the white men who chased and killed Ahmaud Arbery, suppressing video evidence so they wouldn’t be charged with murdering him.

This is irresponsible journalism and we thank you for what we all know is about to happen. https://t.co/LTBuo3a82k
— Rivers Langley (@RiversLangley) September 2, 2021

• You know times are tough when you’re Kanye West and you’re getting dragged by Peppa Pig.

• And now… THE WEATHER REPORT: A sunny, sunny day today with a high of 87. Get yer thong on!

And a legend was born… pic.twitter.com/pk1ejrMCxj
— Rex Chapman🏇🏼 (@RexChapman) September 2, 2021