The mission of conductor and music director Devin Patrick Hughes is to uplift the human spirit through the orchestra and share the relevance of symphonic music in our modern lives. 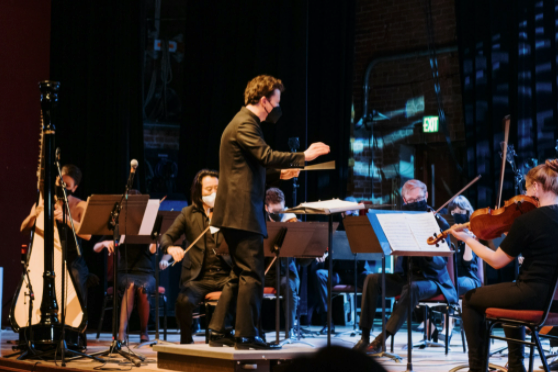 The mission of conductor and music director Devin Patrick Hughes is to uplift the human spirit through the orchestra, and share the relevance of symphonic music in our modern lives. Devin resides in Colorado, where he conducts the Boulder Symphony and Arapahoe Philharmonic and hosts the podcast One Symphony.

Tom Virtue is a bassist in the Arapahoe Philharmonic and television editor, voice-over and narration contributor, and videographer. Tom also performs as bassist around the Denver-metro area, including Principal Bass with the Aurora Symphony and Stratus Chamber Orchestra.

The following interview was originally conducted for an educational project that provides in-school content and curriculum material made possible by the Arapahoe Philharmonic Orchestra.

Tom Virtue: How did you get started as a conductor?

Devin Patrick Hughes: I started conducting at a pretty young age, but was never serious about it. I would go to our arts center and see musicals, and come home with my brother and reenact those stories, both through singing and conducting the cast in my mind.

Another really early memory I have is going to a children’s concert and the conductor kept trying to shush the kids because we got so excited, and I was the only one, at least who I could see, was trying to help the conductor to get everyone to be quiet so we could listen to the musicians on stage.

What do you love most about conducting?

The most important facet or aspect, and the most interesting in my opinion, is that we are the one person on stage that does not make a single sound, if everything’s going ok of course. A symphony orchestra is one of the most amazing things in the world, because whether it’s a chamber orchestra, 50 or 80 musicians, or in Mahler’s case the Symphony of a “Thousand,” it happens to be an avenue where all of these different players and sometimes singers get on the same stage; all of them are playing at their highest level possible, and have trained, practiced, and studied for tens of thousands of hours throughout their lifetime on their instrument, and they all come together with their own very strong opinion many times of how music should go, of how life should go… And it’s the job of the conductor to in some way, fashion, or form bring all of those elements together.

Can you talk about the patterns of conducting?

One of the basic elements that we learn in terms of technique as orchestral conductors are the patterns. A basic pattern is a two bar. The arm (either left or right, or both) goes down (1) then up (2), and down (1) then up (2), repeating. That could be music “in two,” the main melody in the fast section (or Vivace) of the first movement of Beethoven’s Seventh Symphony for instance.

Another basic pattern is the three bar. The arm (with or without a baton) goes down (1), then out or away from the body (2), then back in and up (3) to prepare for the next downbeat (1), an repeating.

So how does this translate to communicating the music with the orchestra?

You can see that no matter where someone may be sitting in the orchestra, the conductor should be clear where the downbeat is (down), and then the last beat of the bar (called the upbeat) is always up. So in a 2 bar, the 2 is up, in a 3 bar the 3 is up, and so on. That way players who are looking at the music, and also looking in their peripheral vision to see the conductor can generally get a sense of where the downbeat is, and where the upbeat is.

But ultimately for many orchestras, and for most of the music we generally play, once a conductor starts a group, the musicians start to listen to each other, and the orchestra is pretty good at staying together without having to look at a 1-2-3 all the time, and the role of the conductor becomes more to shape the music and clarify its gesture or character.

Can you talk about what needs to be added to performance by the conductor and musicians? Doesn’t the composer specify how we should play?

When a musician or conductor is looking at music, there are a few instructions that tell us how to articulate the notes, how to separate or connect neighboring notes, how loud or how fast to play, and sometimes a few more. But there is not much instruction in how to actually shape the music to translate or express what the composer is trying to communicate. In fact we have no idea for example how Mozart or Beethoven would have expected their musical melodies to be shaped, or where the emphasis might lie. When we speak a sentence in any language, there are natural stresses and releases depending on the emotion, individual speaker, or language spoken. In instrumental music we have to create the same effect, based on the composer’s instructions, and our own musical intuition, which is honed through years of performing music by that same composer or others writing around their era.

For example the opening melody to the last movement (Finale) of Mozart’s Symphony no. 36 “Linz,” could be played or sung a multitude of ways. There are conceivably endless possibilities when performing or interpreting this opening melody. Mozart doesn’t give us any help as to which notes to emphasize or any kind of directionality in terms of what bar the phrase should go to.

One general rule of thumb that I like to use with Mozart is this: if you break the music into four bar phrases, and if there was a scientific formula at all, we can emphasize the 2nd and 4th bars of each four bar phrase. This doesn’t always work, and I am certainly not a fan of taking an overly formulaic approach when it comes to artistic expression, but it is a good rule of thumb when one might be stuck at an interpretive fork in the road.

How does gesture apply to the relationship between conductor and orchestra during the performance?

Another possibly obvious but noteworthy aspect of the conductor’s relationship with the orchestra is that we don’t really get to talk to each other during a concert. You rarely see a conductor verbalizing something to the orchestra at a performance or vice versa. So ideally, we are trying to communicate as much as humanly possible just with our gestures which include body language, facial expression, and emotional state. Musicians are communicating all of these too, to their colleagues, conductor, and audience, in addition to creating wondrous sounds to create the performance.

Speaking of gesture, one of the questions I asked as a teenager which provoked some fear of the unknown was the following: how is it possible for a conductor to keep the entire orchestra together with a simple hand or baton gesture? How does everyone play at the exact same time?

Twenty years later and I still haven’t answered that question one hundred percent, but it’s a question that continues to mystify and inspire me every day.

Essentially a conductor is using every tool at his or her disposal, whether it be physical or emotional, to communicate the music not only with the musicians but ultimately the audience. I think music is the most amazing thing that God ever created. It’s the thing that binds all of us. We can communicate with each other, we can laugh, we can cry, we can experience a great drama as one.