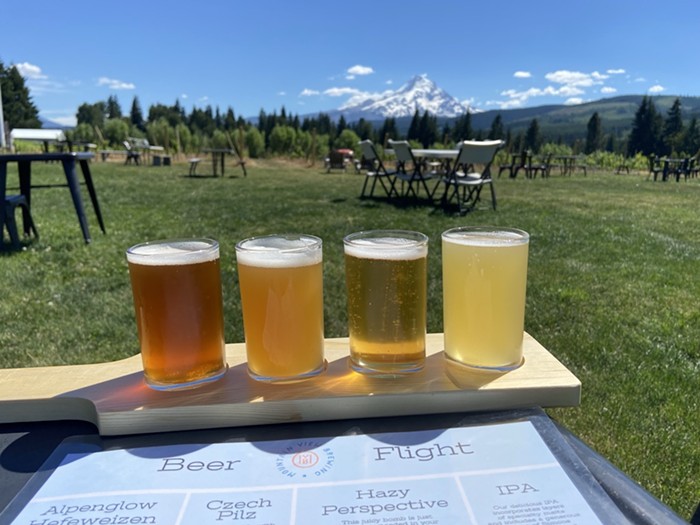 What makes this spot at the top end of the Fruit Loop ripe for boasting the most breweries per capita? For starters, both Solera (established 2012) and the brand-new Mountain View Brewing (established last year during the pandemic) both offer mesmerizing views of the glacier-tipped peak of Mt. Hood. And secondly, what better way to celebrate being mid-way through the vineyard-rich loop than with a cold beer? Apparently many of you agree, because Mountain View’s general manager, Cody Robinson, says the farmhouse brewery welcomes over a thousand guests on weekends.

The brewery is owned by Katrina McAlexander. She’s the third generation at the helm of this century-old, 51-acre orchard that largely grows apples—but pears, peaches, nectarines, cherries, and of course, wine grapes also flourish. More than a brewery with a U-pick farm, Mountain View Brewery is the logical outcropping of having something else to sell to visitors. And if they don’t want beer, there’s also estate cider, hard seltzer, and the aforementioned wine from Grateful Vineyard.

Mountain View’s new head brewer, Jordan Hunt, has a degree in chemical engineering, and cut his teeth at Sunriver Brewing. He still lives in Central Oregon, making the weekly trip to Parkdale to brew on their four-barrel system. (That’s half the size of Solera’s, which isn’t that big.) The beers are all clean, tasty, and approachable. Sometimes small breweries have a difficult time making flaw-free pilsners, but Hunt’s sticks the grassy landing.

What’s fascinating is that the beers, as mandated by Mountain View’s farm brewing license, must feature a portion of farm-grown crops—so there’s actually a healthy portion of pear juice as part of the fermentation process. The malted barley’s maltose completely overrides the pressed pear’s fructose in flavor (the aromatics are boiled away), yet the pear has the unexpected result of drying out the beer.

Which isn’t to say you won’t find a fruity, hazy IPA. Even the hefeweizen has a pleasant fruit character, but derives those notes more from the New Zealand-grown Southern Cross hops and PNW-grown Lemondrop hops than the juice quotient.

Hunt is currently experimenting with wild fermentation and hopes to have wine barrel-aged fruit beers available next year, thus fitting in nicely with the programs from other Columbia Gorge breweries like Solera, pFriem, and Logsdon. In other words, we can one day expect Belgian Kriek-style ales incorporating the orchard’s own cherries and wine-hybrid-style ales, sometimes called oenobeers, using estate grapes.

The pastoral beer garden (slash wine garden, cider garden, and seltzer garden) hosts concerts, allows picnics, and is available for weddings, and Robinson hopes to host upscale pairing dinners and niche events soon. I say niche because even if Mountain View grows beyond its current 250 or so barrels of beer production, don’t look for it on tap or in cans in Portland. The beverages are of and by the Columbia River Gorge set—though enjoyable for anyone who’d like to visit this place.