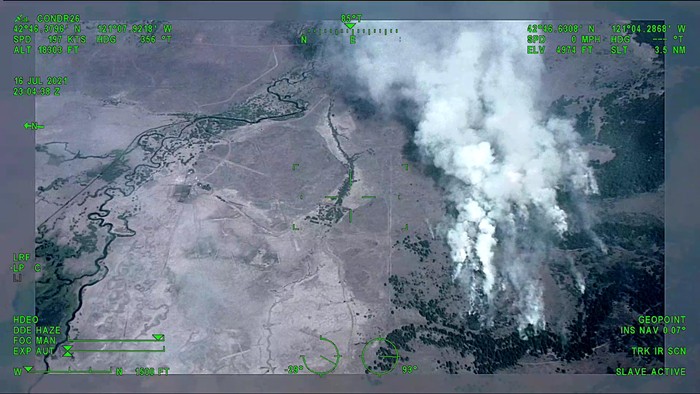 An aerial photo of the Bootleg Fire in Southern Oregon. Oregon Department of Forestry

Good morning, Portland. We’re headed into yet another hot and dry week—today promises a high of 87 degrees. Keep cool with one of the many $5 boozy slushies offered at Portland watering holes this month.

– One person was killed and at least six others were injured in an early morning Saturday shooting near a downtown Portland food cart pod. Portland police have offered very little information about the incident, including whether officers know what precipitated the attack. No suspects have been arrested.

– Windy and dry conditions contributed to significant growth of Southern Oregon’s Bootleg Fire over the weekend. The wildfire, which is spread across Klamath and Lake counties, now occupies nearly 300,000 acres, and is about 22 percent contained by fire crews.

– After a consistent decline in COVID-19 cases, Oregon is seeing an increase in the virus’ spread. State experts are pointing to the highly contagious delta variant—paired with unvaccinated communities—as the cause.

– Things that make me shout “Oh no!” while scrolling Twitter:

Another possible candidate for Oregon governor.

– Minneapolis is trying its hand at sending unarmed first responders (read: not cops) to mental health emergencies without police. Sound familiar? The structure is similar to the model adopted by Portland Street Response.

– Hip-hop icon Biz Markie has died at 57. While he’s best known for his banger “Just a Friend,” his MIBII cameo deserves recognition:

Biz Markie guest starred in Men in Black II where he and Will Smith spoke to one another in beatbox as an alien language pic.twitter.com/zuMiqioMbX

– Frito-Lay workers are striking over forced overtime and low wages that have been exacerbated by the pandemic. One unionized employee shared his experience working 37 years at a Topeka, Kansas factory with Vice, which included this lovely anecdote:

“One guy died a few years ago and the company had people pick him up, move him over to the side, and put another person in his spot without shutting the business down for two seconds.”

– After massive floods caused by heavy downpour killed more than 150 Germans, Angela Merkel called for European countries to take swifter action to address climate change. “It is terrifying,” she said during a tour of the flooding. “The German language can barely describe the devastation that’s taken place.”