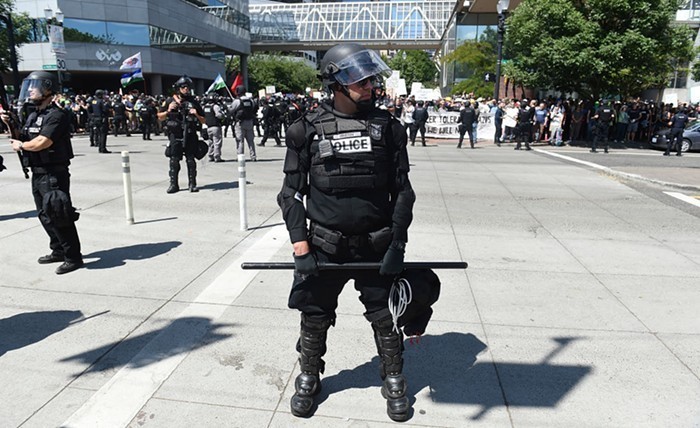 The US Department of Justice (DOJ) gave the City of Portland a to-do list Tuesday that, if met, could keep Portland from facing additional federal sanctions over its police force.

Among its nine requests, the DOJ has asked the city furnish Portland Police Bureau (PPB) officers with body cameras, hold accountable PPB supervisors who approved officers’ violence against protesters in 2020, and submit a transition plan for its new police oversight board.

The new demands are the latest in a back-and-forth between the City of Portland and the DOJ concerning the status of their joint settlement agreement. In 2012, a DOJ civil rights investigation concluded that Portland officers have a habit of using disproportionate physical force against people who appear to be having a mental health crisis. The findings forced the city into legal negotiations with the DOJ, resulting in a 2014 settlement agreement, in which the city agreed to meet certain goals regarding police training, use-of-force policies, accountability measures, and other tools to improve PPB.

In early 2020, the DOJ announced that the city had finally met all of the requirements of the settlement agreement—meaning the city would soon be released from the years of court check-ins and legal briefings. The process changed course in February 2021, when DOJ attorneys explained that, because of Portland police’s use-of-force against racial justice protesters in 2020, the City of Portland was no longer in compliance with the settlement agreement.

The city swiftly rejected this analysis in a 40-page letter sent to the DOJ in May, which called the feds hypocritical for criticizing PPB officer’s actions when federal police also treated Portland protesters poorly last year.

The DOJ’s Tuesday list offers its response to this letter, by telling the city what exactly it needs to do to again reach compliance with the settlement. DOJ attorneys met with Portland attorneys and several city commissioners Tuesday to discuss these recommendations. During a Thursday meeting with the Portland Committee on Community-Engaged Policing (PCCEP)—a community police oversight group—DOJ attorney Jared Hager said he felt “cautiously optimistic” about the “very productive” Tuesday meeting.

Here are all nine requests by the DOJ:

1. The City should implement body-worn cameras (BWCs) for all officers (this remedy also relates to Accountability).

3. The City should contract with a qualified outside entity to critically assess the City’s response to crowd control events in 2020 in a public‑facing report that includes recommendations to which the City will publicly respond.

4. The City should create a “needs assessment” for crowd control training that adequately addresses issues with PPB’s response to the 2020 protests. We propose this to be part of the crowd control assessment we just discussed.

6. The City should appoint a qualified civilian head over PPB’s Training Division to ensure consistent and appropriate training based on problem-based learning and other generally accepted adult-learning techniques.

7. The City should identify and hold accountable [Rapid Response Team] Lieutenants and above who approved force without adequate justification during the 2020 protests.

8. If the City’s proposal for addressing timeliness and quality of investigations and effective discipline is the implementation of the new voter-approved Community Police Oversight Board, the City should propose amendments to the Agreement within 90 days and formulate a plan for an orderly transition to and full implementation of the Board.

9. The City should issue its 2020 annual report and hold the required meetings before the end of summer 2021, and do the same in 2022 and any future years during which the Agreement is still in effect.

Perhaps most controversial of these requests is the ask to arm officers with body cameras. PPB is the only police department among the 75 largest municipal law enforcement agencies in the US that doesn’t use body cameras, according to a recent KGW investigation. City officials—specifically City Commissioner Jo Ann Hardesty—have been long resistant to body cameras, pointing to their high price point and the potential for police to view video footage before investigators. This hesitation has kept the city from moving forward with a PPB pilot project to purchase and use body cameras, but hasn’t stopped the PPB’s union (the Portland Police Association [PPA]) from proposing the city adds a body camera requirement to its contract with the city. It’s not clear if the city is considering this proposal.

DOJ attorney Jonas Geissler said during the Thursday PCCEP meeting that the city seemed open to this policy change during their Tuesday conversation.

The future of the city’s new police oversight board has also been central to recent contract negotiation discussions between the city and PPA. Portlanders voted to adopt a new police oversight board in November, one that would have more power to investigate PPB officers and give city staff outside of PPB the ability to discipline cops. The PPA initially argued that this new department should have been introduced through contract bargaining to align with state labor relations rules, but a recent bill passed by the Oregon Legislature effectively voided that argument.

Because of a drawn-out preparation process, the new board is still at least a year away from forming—which is why the city has hesitated from updating the settlement agreement to include it. The DOJ, however, appears to believe the settlement requires the update to meet the agreement’s terms, as noted in its eighth list item. This request will require the city submit an amendment to the settlement agreement—a process that will need Portland City Council, the DOJ, and the federal court’s approval.

The DOJ’s February ruling which found PPB out of compliance with the settlement was heavily based on the more than 6,000 reported instances of police using force against protesters in 2020. Not only did the DOJ find the sheer number of those actions to be inappropriate, they criticized PPB supervisors for not adequately reviewing or questioning officers’ decision to use such force.

This explains their list’s request to hold lieutenants responsible for allowing force “without adequate justification.”

“In additional to holding officers accountable, one needs to look at the entire administration,” said Geissler Thursday.

Hager added: “It’s not too late to hold supervisors accountable.”

The city is expected to give their reaction to the DOJ’s nine-step remediation plan by next week. If the city rejects the suggestions, it may be forced into a mediation session with the DOJ. If mediation fails, it will then be up to the federal judge who oversees the case, District Judge Michael Simon, to analyze whether or not the city is, in fact, out of compliance with the settlement agreement. If Simon agrees, per the rules of the settlement agreement, he can “devise an appropriate remedy” to ensure the city complies.