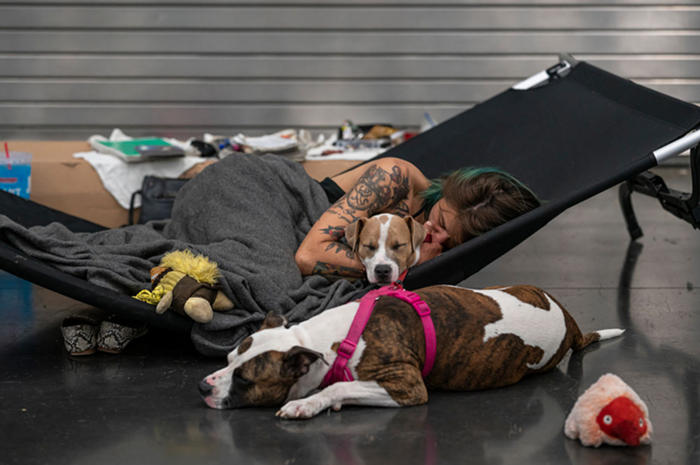 One of the hundreds who escaped the deadly heat at the Oregon Convention Center last weekend. Nathan Howard / Getty News

• Last weekend’s heatwave is proving to be deadlier than originally thought, and has so far brought about the deaths of at least 53 people in Multnomah County, and at least 79 people across the state—and those numbers are expected to rise.

The first identified victim of the suffocating heat that gripped Oregon was a construction worker who was found in a trailer where temperatures reached 130 degrees, according to the Umatilla County medical examiner. https://t.co/5svSisCIpC pic.twitter.com/a8BgVNtxqD

• In case you’re unfamiliar, Clean & Safe is the clean-up and (partially armed!) security squad that patrols 213 blocks of downtown Portland, but is paid for by local businesses—some of whom are not happy with the lack of transparency being offered by their overseers, the Portland Business Alliance, and what Clean & Safe is doing on public property with virtually no oversight. Our Isabella Garcia sat in on a Clean & Safe listening sesh with local businesses and has all the juicy details.

OHA: Over 90% of June COVID deaths among unvaccinated https://t.co/AIhQWkz8zg

• It certainly took long enough, but Mayor Ted Wheeler has followed the recommendations of Portland’s Fire & Rescue squad, banning the sale and use of all fireworks in Portland due to dangerous dry weather conditions. Our Isabella Garcia explains why this action was necessary to add additional teeth to the ban.

The campaign to recall Ted Wheeler as mayor of Portland launched today:

• An intensive care nurse at OHSU is the latest to have filed a lawsuit against the City of Portland and its increasingly expensive/violent Portland Police, saying he was tackled by Officer Thomas Clark even though he was following orders and was then punched in the face “a minimum of five times.” The lawsuit adds that at the time Clark “wore ‘tactical’ gloves with raised plastic knuckles intended to inflict more damage on his victim.” You’re paying for this guy, Portland—over and over again.

• And the shoe has dropped: The Trump Organization and its CFO Allen Weisselberg have been charged with committing a “sweeping and audacious” 15-year tax fraud scheme in which the executive allegedly stole more than $1.7 million in compensation that was off-the-books and not reported, thereby defrauding the federal government. Trump himself has not been charged (yet!), but apparently signed some of the checks. Weisselberg has pleaded “not guilty” to the charges… but there’s plenty of time left for him to flip on his dark lord and master.

It is a pretty cut-and-dried case of tax fraud. “The real question is whether Weisselberg is liable to flip and become a cooperating witness against the head of the Trump Organization—a/k/a “the Former Guy,” a/k/a Donald J. Trump,” writes @przeidenberg https://t.co/zIBPmsZxyz

• The conservative-heavy Supreme Court has sided with Arizona to insure that voting in that state will be much harder for people of color, pretty much gutting the 1965 Voting Rights Act. President Biden is encouraging Congress to restore the Act and voting rights for all Americans—not just the white ones.

• House Majority Leader Nancy Pelosi has invited Republican Rep. Liz Cheney to join the investigative committee that will explore the causes and people behind the January 6 domestic terrorist attack on the nation’s capitol, which can’t be good news for those Republicans who voted against the committee and were probably aiding and abetting the traitors. But… what are ya gonna do?

The Lava fire, which is burning in a fairly remote part of Siskiyou County near the Oregon border, had swelled to nearly 20,000 acres by Thursday morning, drawing more than 1,200 fire personnel to battle the blaze. https://t.co/FGNsP5l0mW

• Icky billionaire Jeff Bezos has announced he will be accompanied on his upcoming totally superfluous space flight by the 82-year-old Wally Funk—a female member of the Mercury 13 program, all of whom were rejected from becoming astronauts because of their gender. We still don’t like him any better.

• Oh and this just in: Also icky billionaire/horrible man-child Richard Branson says he’s now on course for beating Jeff Bezos into space. FUCK BOTH OF THESE GUYS!

• Today in “Don’t let the door hit your ass on the way out”: “Meghan McCain says she’s quitting ‘The View’ in late July.”

• And now… THE WEATHER REPORT: Clouds in the morning with daytime temps climbing to 85 degrees.

Perhaps the best Tiktok out there pic.twitter.com/VzFOMm1RbK