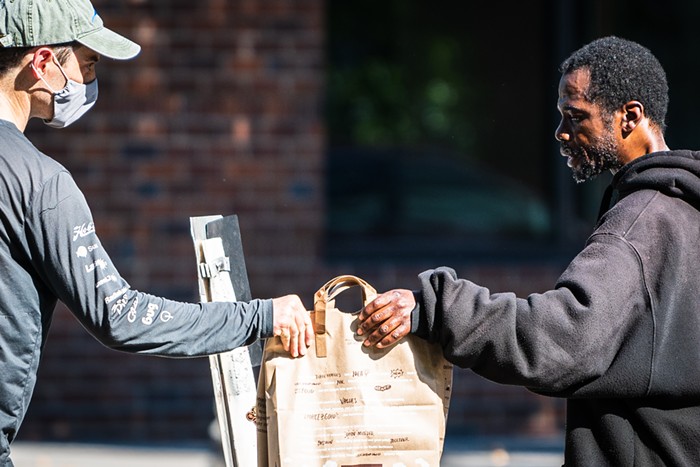 A community member donates a bag of refreshments to a man sitting outside during the heatwave. Mathieu Lewis-Rolland

According to the Multnomah County Medical Examiner Program, the people ranged in age from 44 to 97, and many were found alone without air conditioning or a fan. The preliminary cause of death for all 45 people is hyperthermia, or an abnormally high body temperature.

Comparatively, from 2017 to 2019, Oregon recorded 12 deaths from hyperthermia.

“I know many county residents were looking out for each other and am deeply saddened by this initial death toll,” said Multnomah County Health Officer Jennifer Vines in a press release. “As our summers continue to get warmer, I suspect we will face this kind of event again.’’

Portland broke high temperature records for three consecutive days during the heatwave, causing a strain on local emergency systems. There were 491 calls to 911 for medical assistance on June 28—the highest-ever number of 911 medical calls ever recorded in Multnomah County. Additionally, between Friday, June 25, and Monday, June 28, there were 131 emergency department and urgent care visits for heat illness in Multnomah County—normally the county would see one visit during the same time period.

The three county cooling centers hosted 1,040 people overnight and saw hundreds more during the day, according to county officials. Additionally, 7,610 people visited the open library branches to cool down.

There were nearly 60 teams of outreach workers and volunteers passing out water, electrolyte packages, and cooling towels to people experiencing homelessness throughout the county. The county reports distributing more than 60,000 bottles of water throughout the heatwave, at one point distributing 18,000 bottles within four hours.

Calls to Animal Services for animals in crisis increased by 300 percent during the heat event. Two adult dogs died due to the heat.

It’s possible that the death toll from the heatwave will continue to rise. It is also not possible to determine how many of the people who died were unhoused until the county completes its investigation.

At least 63 people died due to the heat statewide, according to the state medical examiner.