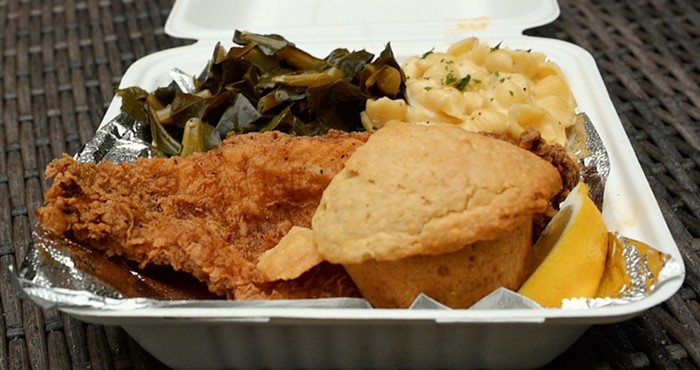 On a muggy recent weekend afternoon Erica’s Soul Food was bustling. They’d sold out of salmon croquettes—a customer favorite—and were running dangerously low on catfish, which I managed to secure before a motorcycle club of ten arrived.

The people in line ahead worked cooperatively to make sure they ordered each side dish the cart offered: mac and cheese, collard greens, black-eyed peas, sautéed squash, stewed cabbage, seasoned tater tots, or crinkle fries. Two sides accompany each entree, but the pair solemnly agreed that they needed as many sides as possible. The remaining ones would need to be ordered independently—for $4 each.

Those side orders pay dividends, despite the extra cost. At Erica’s Soul Food, much of the menu will set you back—entrees range $13-$18. However, you’ll find the investment shows up in a to-go box laden heavy with some damn fine Southern cooking. The ten bikers in line behind me proved that people will pay for what Erica’s has to offer.

It’s also worth noting that the cart’s Soul Bowls—combinations of cornbread, gravy, sides, and proteins, described aptly as “just a bunch of good stuff in a bowl”—are a little more reasonably sized and priced at $9. Mashed together is also how much of the flavors work. The cornbread’s hardiness (without sweetness) makes it a perfect tool for scooping cheese or mopping up fish fry remainders. The collard greens were lemony and slightly bitter with just the right amount of chew to spring back against each bite.

I also ventured into the realm of additional sides, which is how I ended up with a dangerous mountain of the crunchiest seasoned tots I’ve ever tasted, their circumference perfectly crisped in its entirety. Never before have I had a tater tot fried to such a level of completeness.

While Erica’s Soul Food is located off SE 82nd (not exactly known for ambiance), the cart is tucked slightly west, down SE Morrison—in the same lot as Growlers Taproom. During the pandemic the taproom moved from a larger spot on SE Hawthorne, and now provides a covered patio for those who wish to sip on a craft beer while they demolish some peach sriracha chicken wings. Erica’s also offers a surprising number of vegan options, including soy wings—made with a sugar cane bone.