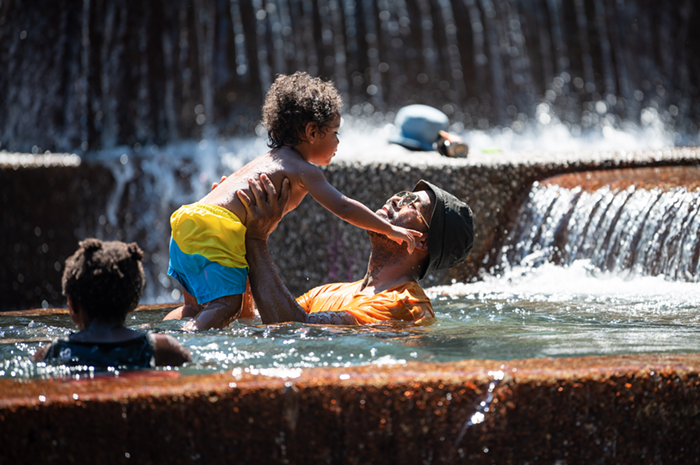 Portlanders keeping cool in the Keller Fountain during Sunday’s edition of the heatwave. Mathieu Lewis-Rolland

GOOD MORNING, PORTLAND! Strange voices are sayin’ (what did they say?) things I can’t understand. It’s too close for comfort, this heat has got right out of hand. LET’S GO TO PRESS.

• Expect more record-breaking temperatures today as forecasters predict temps to hit a whopping 115 degrees today, after breaking records on Saturday (108) and Sunday (112). Folks, this heat is NO JOKE, and it’s imperative that we look out for our neighbors (houseless and housed) who may be in danger. Our Isabella Garcia has gathered a great list of cooling sites across the county, so check it out here.

⚠️ All MAX Light Rail and Portland Streetcar service is suspended until Tuesday morning due to the extreme heat. Bus service is still operational. If you have to travel right now, check https://t.co/ai0Fty2DDd.

• As if the heat wasn’t unsettling enough, more than 6,000 PGE customers across Oregon lost their electricity yesterday as the power grid became unstable due to the massive use of air conditioners.

• Check out this insanely thorough thread about what you can do to beat the heat:

Hi. I’ve been worried about you overheating so here I am with bossy bossy tips.

Blackout your windows. All of them. If you got aluminum foil put it shiny side out and then something like cardboard behind that and then a blanket or towels over that. You want it DARK in your place

• After almost 24 hours without a peep, Portland Police finally revealed the name of the cop who shot and killed a man in apparent mental crisis on June 24 in the Lloyd neighborhood. 40-year-old Michael Ray Townsend was shot by Officer Curtis Brown after Townsend approached the officer with a screwdriver-like object, according to video released by the police. This is the second police shooting of a person in mental crisis this year. Read more from our Alex Zielinski.

• In sporting news: The Portland Trail Blazers has announced they will be replacing former coach Terry Stotts with Chaunce Billups, an assistant coach with the LA Clippers and five time All-Star. While many were expressing support for the new coach, some fans asked star player Dame Lillard to use his clout to reverse the decision, pointing out that Billups was once accused of rape, though never officially charged and the case was settled out of court. Dame was not happy about the push-back:

Really? I was asked what coaches I like of the names I “heard” and I named them. Sorry I wasn’t aware of their history I didn’t read the news when I was 7/8yrs old. I don’t support Those things … but if this the route y’all wana come at me… say less https://t.co/N1GPkX3Ohd

• PUBLIC SERVICE ANNOUNCEMENT: Fireworks, especially right now, are the shittiest idea of them all.

“As a fire scientist, I’m bracing myself for this fire season because of how dry and hot it is already,” Balch said. “I think fireworks right now are a terrible idea.” https://t.co/ugPpuUFMcm

• Rescuers are still frantically searching for survivors following the collapse of a Florida condo last week, while nine people have been confirmed dead, and more than 150 are reported missing. There is some hope that “voids” or empty pockets in the wreckage may be holding survivors, but those hopes are fading as each day passes.

• Related: An engineer’s report noted structural problems with the now collapsed condominium, way back in 2018.

• Here’s some promising COVID news, even as the Delta variant zeroes in on communities with low vaccination rates: A new study indicates that the Pfizer and Moderna vaccines boost the immune system to the point where they could protect recipients from the coronavirus for years.

The Pfizer-BioNTech and Moderna Covid-19 vaccines may protect against the coronavirus for years, a study of more than a dozen vaccinated people found.

The findings add to evidence that most people immunized with the mRNA vaccines may not need boosters.https://t.co/U7eNTP9bvI

• A good ruling from our sketchy Supreme Court: The justices voted to reject a Virginia school’s plea to reinstate their transgender bathroom ban, leaving the lower court’s ruling in place that such bans are (NO SHIT!) unconstitutional.

• Over the weekend, the military launched what they called “defensive” airstrikes in Iraq and Syria, saying they targeted Iran-backed militia groups who they believe were behind drone attacks on American personnel.

• According to a new book by Michael Wolff, as loser President Trump was watching the January 6 domestic terrorist attack on the nation’s capitol, he made fun of his followers—particularly their outfits—calling them “idiots” and “the great unwashed.” (He left out “deplorables”!)

Billboard ranks Lil Nas X’s “MONTERO (Call Me By Your Name)” as the best performance at the 2021 BET Awards. pic.twitter.com/dN3eRpWBKo

• And now… THE WEATHER REPORT: Portland’s record-breaking heatwave continues with temps predicted to hit 115 today—though they’re expected to drop down to a frosty 95 tomorrow.

• And finally, IN MEMORIAM: Remembering when white people had rhythm.

Going back to this video because white folks had actual rhythm in the 80s 🎵 pic.twitter.com/DCgJzenk9p
— its Lee (@_SayLee) June 27, 2021